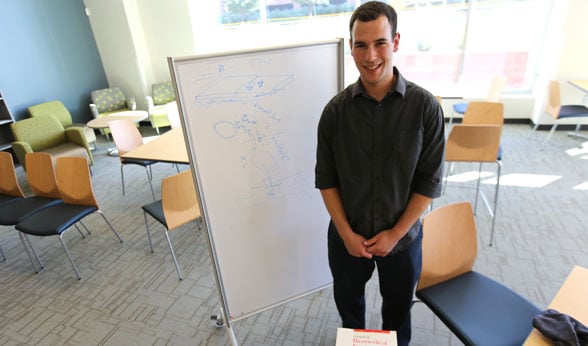 Adam Rauff, a junior in bioengineering, takes a break in the student lounge in the new Bioscience 2 Building at CU Anschutz.

AURORA — On a recent day after class, bioengineering student Adam Rauff takes a break inside the spacious and sun-bathed student lounge of the new Bioscience 2 Building. Outside, the building is surrounded by state-of-the-art labs and clinics at the University of Colorado Anschutz Medical Campus.

"I'm still feeling out what's on this campus," Rauff says. The Bioengineering Department's new home on the first floor of Bioscience 2 is filled with cutting-edge equipment, classrooms, faculty offices and small-group study rooms. Upstairs, as well as at the Bioscience Park Center across the street, are several startup companies, with more launching every year.

Rauff is a member of the first bioengineering undergraduate cohort to move into upper-division courses at CU Anschutz this fall. The cohort of 15 students began their program in 2013 at CU Denver. "I definitely see the medical campus location as an advantage," he says. "It's great being close to the people who encounter these kinds of bioengineering problems in a clinical setting."

Rauff, like most peers in the Bioengineering Department, part of the College of Engineering and Applied Science, wants to use his engineering knowledge to advance human health. Professor and Founding Chair Robin Shandas, PhD, said CU Denver and the CU Anschutz Medical Campus together provide students with unprecedented resources to do just that — combine bioengineering instruction with health-oriented research and clinical opportunities.

CU's Bioengineering Department is the first of its kind in Colorado — the closest similar programs are in Salt Lake City and St. Louis — and its graduate program, launched in 2010, is already ranked No. 83 nationally by U.S. News and World Report. It typically takes new programs more than 10 years to reach that level, Shandas noted. "Word is getting around" about the young program and its affiliation with a world-class medical center, he said.

"I don't know of any academic program that allows a similar experience," Shandas said. "Here, it's not theoretical. You can put a real human face on the technical projects you're working on. Our mission is to apply engineering ideas, principles and inventions to the goal of helping humans. We're on a medical campus, with major hospitals here, so that's really the core of our identity." 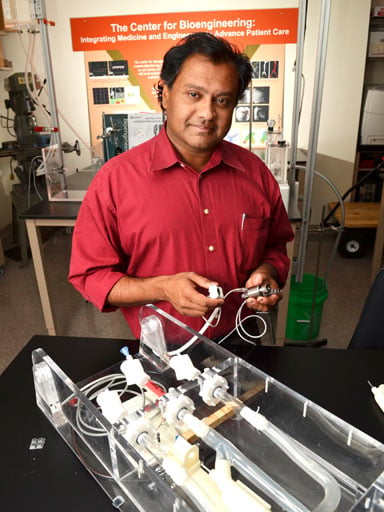 Robin Shandas, PhD, is professor and founding chair of the Bioengineering Department.

Shandas calls it "surgical forensics" — trouble-shooting medical problems from an engineering perspective. Students can work on a biodesign concept and get immediate feedback from clinicians or bioscience company managers on whether the device suits their needs. "Connecting with the end-user in a design process is incredibly important," Shandas said. "For example, our students can design their devices in lab and go next door and print it on 3D printers and then talk with a surgeon directly. By being on a medical campus, we can keep encouraging and building on those connections."

Bioengineering is a fast-growing and high-paying field, and the thriving Bioscience Park at the CU Anschutz Medical Campus is a key part of that national wave. Shandas has founded seven companies, including a few that launched through collaborations with clinicians and surgeons at CU Anschutz. A bioengineering student in the master's program has already started his own company, while many others have landed good-paying jobs at Medtronic, SomaLogic, Covidien and more.

"We want that entrepreneurship aspect to be a core part of our department," Shandas said. "We want our students and faculty to be entrepreneurial-minded. It gives you other mechanisms, rather than say NIH (National Institutes of Health) grants, to take your ideas into clinics."

The Bioengineering Department, which offers bachelor's, master's and doctorate programs, has seen significant expansion in recent years, growing from an inaugural class of 14 graduate students in 2010 to about 80 today. With an almost equal number of undergraduate students, many of whom are pre-med, the program now counts a total of 160 students. The core faculty has grown from six to 13, plus about 20 faculty members at CU Anschutz who participate in bioengineering classes. "With this new building (Bioscience 2), we have space to bring on new people," Shandas said, noting that he expects six to eight more core faculty members to be hired within a few years.

The program nimbly incorporates real-world principles of engineering, biology and entrepreneurship. While building prototype devices — many of which are now created using a patient's own tissues rather than synthetics — students learn about U.S. patent license and Federal Drug Administration processes for new equipment. They also learn the importance of cost containment in today's health care environment; unlike in past decades, engineers can't just make the best device and charge the highest premium. "Cost is something you always have to think about," Shandas said.

In Cell and Tissue Engineering, one of the program's new core undergraduate classes, students learn about the engineering of biology — how to grow cells, how to manipulate a stem cell, and how to understand cell behavior. "Students will be competent in all experimental techniques, which is rare," Shandas said. "In the typical program, you might learn the theory of these things but you won't get to actually do it — certainly not at the undergraduate level." 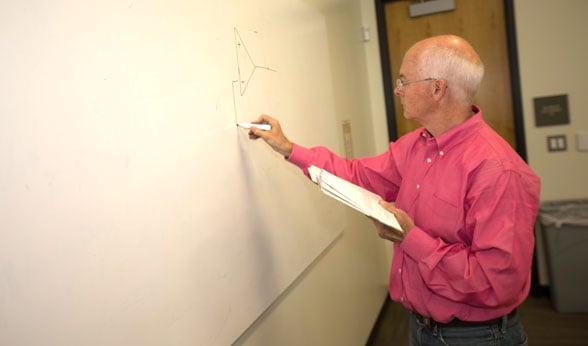 Students are exposed to a wealth of labs, including biomechatronics, biodesign and biophotonics. In the incubator of the Bioscience Park, the Bioengineering Department has the resources of faculty expertise and student talent to take an idea and methodically build it into a market-ready device or possibly a business, Shandas said. The test-lab aspect of a university is appealing to firms in the rapidly evolving bioengineering field because "a lot of times, as a company, you spend a lot of money going down dead-end paths, and here, you can use our program to avoid those problems."

Also, with their proximity to so many clinics and bioscience startups, CU bioengineering students enjoy ample opportunities for internships or even post-graduate employment.

It's not surprising, Shandas said, that many business leaders are bioengineers by training. In a program like CU's, leadership training is part of the curriculum. "You have to talk to a lot of people about what you're doing — doctors, patent lawyers, other students, clients, sometimes even patients — and that builds communication skills," Shandas said. "Also, it's a very complex field; you have to work as a team."

That teamwork aspect is one of things Rauff likes best about the program. "I like the first-year closeness that we've all developed in the undergraduate program," he says. "We're all in the same cohort and we've got to know each other."

Rauff is exploring what he'd like to do after he earns his bachelor's degree; graduate school is a future goal. He'd like to use what he's learned in the bioengineering program to help people. "As an engineer I like to make things," Rauff says. "So, definitely, knowing that what I design has some real practical solutions (to health problems) is what I'm looking for."