Willie Peterson is an Army veteran who has lived through his share of hard times. He has learned to cherish small blessings and pay attention to positive role models. One such role model sat across from him over a string of dental appointments which saw Willie’s once-shy smile transform into a mouth of pearly whites.

That person is Bill Berguin, a recent graduate of the CU School of Dental Medicine. Bill has been the architect of Willie’s new dentures and a close witness to the inspired and ever-upward trajectory of Willie’s life. 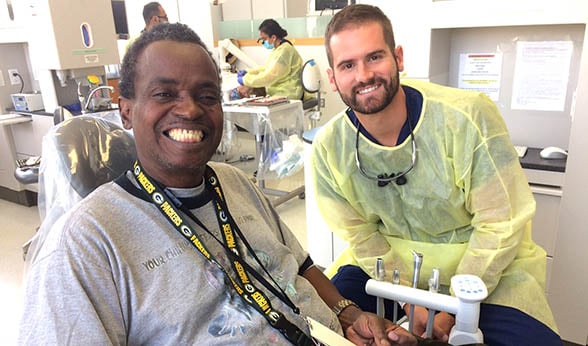 At a recent dental appointment, Willie was all smiles. Besides gaining his stellar teeth, the soldier was excited to fill in Bill about yet another achievement. “Check out my credit score,” he said with a beaming grin. “Also, I’ve got a job. I haven’t had a good job in a long time.”

Willie met Bill about a year ago when he became the first Pathway 1 patient in the dental school’s Heroes Clinic, a Delta Dental of Colorado-sponsored program which provides free and discounted dental care to military veterans. Pathway 1 provides dental care to veterans served through the Bill Daniels Veteran Services Center, which helps link homeless veterans to jobs.

They come from different backgrounds – Willie is from Wisconsin and Bill hails from the Western Slope – but they bonded during Willie’s many visits to the dental chair. “I got to sit and talk with him about life – where he’s from and what he’s doing and how he was trying to go back to school,” Bill said. A few good-natured jabs also found their way into the conversations. Bill likes to razz Willie about being a Green Bay Packers fan, while Willie dishes it right back on the Broncos.

Kidding aside, Willie once confided to Bill, who was in the fourth year of dental school, that he had planted in the soldier's mind the notion of returning to school. “I thought that was really neat,” Bill said. “I told him he might want to see a graduation, so he’s going to come to my graduation.”

Sure enough, early last Friday morning, Willie boarded a bus near his Denver apartment and rode to the CU Anschutz Medical Campus to attend Bill’s graduation. He hadn’t been to a graduation since his own from high school some 40 years ago. When Bill said he was looking forward to having his new friend meet his family, Willie smiled, extended a hand for a firm shake and said, “I want Bill to come to my graduation, too.”

Willie Peterson shakes hands with Bill Berguin at Bill's graduation on May 26.

Willie has his sights on becoming a technician in heating, ventilation and air conditioning (HVAC). He recently enrolled in the HVAC program at Emily Griffith Technical College in Denver.

Asked what he found inspiring about Bill, Willie said, “I just think he’s a perfectionist. He’s a good man.”

Putting his life back together

Willie performed a seven-year hitch in the Army, serving in Korea and Japan and, stateside, in Florida and California. He was discharged in 1983, but soon fell into drug abuse and homelessness. “The whole thing,” he said, shaking his head, “just a few years after I got out of the service.”

Gradually, he began to pay heed to the few positive influences in his life. He reconnected with a Lutheran pastor he’d first met during a spell of living in California. When the pastor moved to Wisconsin, Willie followed and began seeking the clergyman’s counsel.

“He helped me kick drugs,” Willie said. “I needed that – I really did – because I was heading down a bad street.”

Things got even brighter when he sought the help of his mother. “I was just tired of how I was living, so I had to make a change," he said. "I started to hang out with my mom and going to church. I got the hang of it.”

About a year ago Willie made the move to Colorado, where his sister lives. Still, life was a struggle, as the veteran didn’t have a place to call his own. The Bill Daniels Veteran Services Center connected him to the Samaritan House, a transitional housing facility. Willie was riding the 16th Street Mall shuttle one day when he bumped into Heidi Tyrrell, RDH, assistant director and clinical instructor in the dental school’s Heroes Clinic.

“He was grinning ear to ear and wearing a suit that was a little too big for him,” said Tyrrell, who also noticed that Willie was in need of some dental work. “He ‘ma’amed’ me and I said, ‘Are you a veteran?’ He said yes and I handed him my card.”

At the CU School of Dental Medicine's graduation on May 26 are, from left, Army veteran Willie Peterson, graduate Bill Berguin and Heidi Tyrrell, assistant director and clinical instructor in the dental school's Heroes Clinic.

That’s how Willie ended up in a dental chair with Bill as his care provider. Growing up in Grand Junction, where he saw many friends join the military, Bill has a built-in respect for veterans and he felt honored to care for Willie. “I treated him the way I treat all my patients,” Bill said. “He’s a really good guy, so it was easy.”

With each visit, Willie’s smile brightened and his sense of accomplishment soared. “One less thing to do,” he said with another big grin.

Willie enjoys his job as a housekeeper at the VA Medical Center in Denver. Besides his recent enrollment in technical college, he now has a permanent home, a new girlfriend and a burgeoning sense of security.

“I’m tired of living poor – I don’t want to keep living like that,” said Willie, sporting a U.S. Army hat and the ever-present Packers lanyard. “I feel good about myself now.”

Bill likes the idea of giving back to veterans and said that of all the clinical rotations during dental school, the Heroes Clinic became his favorite. Willie was even more special in that he is the clinic’s first Pathways 1 patient. “Folks in that population are a little more at risk,” Bill said, “so it was cool to feel like I was really helping somebody out.”

Bill will return to Grand Junction with a goal of eventually having his own practice. His father is a dentist, and he plans to join his dad's practice to learn the ropes of daily dentistry while paying off student loans.

Bill said his rotation in the Heroes Clinic, especially his time with Willie, will remind him of the very reason he aspired to become a dentist – to help people. “I want to do community service and whatever I can to volunteer and give my time, so I can provide care for people who can’t afford it,” he said. “It’s something I want to continue and not lose sight of.”