A whole day to celebrate being a postdoc? To my jaded postdoc sensibilities, the 10th annual Postdoctoral Research Day, themed “Transcending Boundaries” and featuring speed networking and a “Gong Show”, seemed guaranteed to drag me, kicking and screaming, out of my comfort zone.

The day at the CU Anschutz Medical Campus started with speed networking, which I thought might be like speed dating for nerds. Unlike speed dating, everyone I spoke with at the networking session was interested in me. I talked to a financial planner, a clinical psychologist promoting wellness strategies and several fellow PhDs with successful careers in academia, industry and K-12 education.

Feeling inspired by the morning session, I was ready for keynote speaker Alaina G. Levine’s talk, “You’re essential! Marketing your value to craft your unicorn career”. Levine, initially trained in physics and mathematics, described how bleak prospective job prospects drove her to create her own “unicorn” career through nonconventional paths. Levine is now an international keynote speaker, STEM career consultant and author of Networking for Nerds. 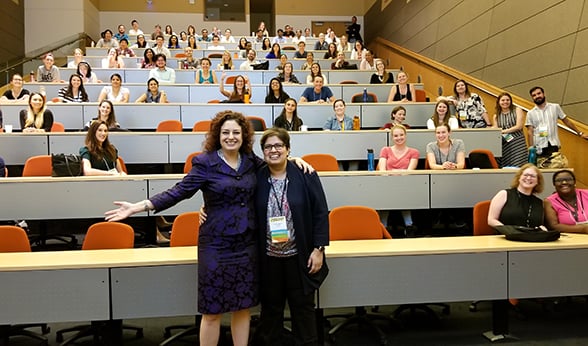 Keynote speaker Alaine G. Levine, left, purveyor of lessons on self-worth and balance, stands with Rushita Bagchi of the Postdoctoral Association in front of a full house of postdocs, graduate students and other community members.

She asked, “What is the purpose of any job in any company in any industry in any part of the known universe?” (My guess: world domination.) “To solve problems,” Levine said. While scientists and engineers are excellent problem solvers, she noted, they are less skilled in the art of marketing their value to potential employers.

Check scientific jargon at the door

Ten scientific presentations from postdocs is normally about as fun as alphabetizing your canned goods, but before you stop reading: this year’s symposium featured a science “Gong Show”.

This innovative idea was developed by Project Bridge, a science communication and policy organization founded by a group of CU Anschutz postdocs. The Gong Show featured presentations lasting less than three minutes with a twist: no scientific jargon allowed. Attendees were given cowbells to shake violently at the first hint of technical terminology.

Somewhat disappointingly, however, there was minimal gong-ing of presenters. I think scientists are a generally a well-mannered audience; we are used to nodding politely despite having no idea what we just heard. Presenters covered a range of topics including balloons to depict fat cell size, cocaine and tacos to describe our brain’s reward system and how to keep transplant organs from spoiling en route to surgery.

Sex, sleep and life as a Yorkie

Second keynote speaker Rebecca Heiss, PhD, who specializes in the biology of business, gave a talk titled, “Survive to thrive: rewiring our brains for better in an epidemically stressed society”. While waiting for Heiss’ talk, a junior faculty member said, “I’m trying to decide if I have time to go to a seminar about stress.” This reinforced one of Heiss’ key points: no one is crueler than the voice inside our heads. 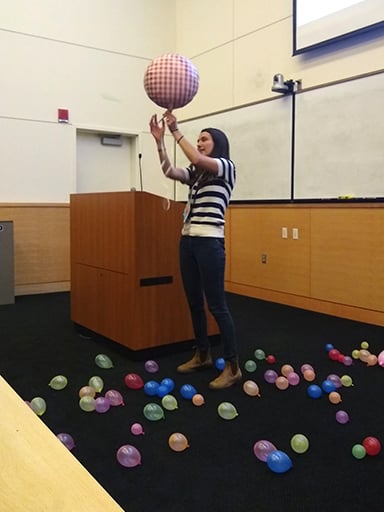 At the science gong show, Allison Porman, PhD, uses balloons to demonstrate how a molecule called "HOTAIR" can disrupt gene activity in cancer.

Heiss boiled our brains down to two key motivators: sex and survival. While we think we’re wolves searching for food and mates, we are actually Yorkies. “We’re not struggling for anything anymore,” she said, so our brain, hard-wired for conditions of scarcity, chooses the safest path, often to our detriment.

To retrain our brains, Heiss recommended getting comfortable with discomfort. Alarm bells should have gone off here, but they weren’t fast enough to save me from what happened next. She made us dance. Without music. For 15 seconds. Maybe this was not so different from speed dating…

When everyone was sufficiently mortified, Heiss said, “My point is that everyone is thinking about themselves. No one is thinking that you can’t dance.” In addition to seven hours of sleep and 10 minutes of meditation daily, Heiss told us to stop believing we can multitask. “Multitasking lowers your IQ by about 15 points,” she said. “I don’t know about you, but I need those 15 points.”

Happy hour afterwards felt like a support group for survivors who stayed all day. Despite my initial lack of excitement, looking back, I laughed more than I expected, made several new connections and got free beer and tacos (cue brain’s reward system).

I also left the symposium suspecting that I might, in fact, per keynote speaker Alaina G. Levine’s repeated reminder, rule the universe.