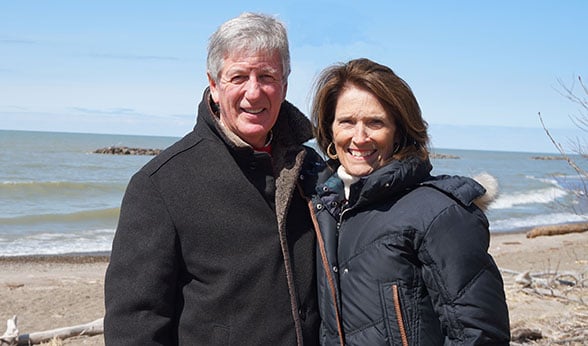 Jeffery and Carol Blake pose during a walk down the shore near their Pennsylvania home.

Carol and Jeffery Blake travel 1,400-plus miles every 12 weeks for a medical procedure that takes roughly 15 minutes. And they’ve done it religiously for four years.

After launching a search for the “best of the best” to treat his wife’s debilitating migraines, a common procedure for the retired cardiologist when his family experiences medical problems, Jeffery Blake found Marius Birlea, MD, and the University of Colorado Headache/Pain Medicine Clinic. It was a match.

“He is extremely well-trained and very interested in finding alternative ways to treat this disease,” Carol Blake said of Birlea, as migraines are still a poorly understood brain disorder. “When you get a doctor who is current in the research and has the ability to treat you well, it’s like dynamite. You can’t ask for anything better than that.”

‘It scares you to death’

Blake joined the 1 billion people worldwide who suffer from migraines during her third pregnancy 36 years ago. But the headaches, which can have a hormonal connection, went away after her fifth daughter was born, even completely for a four-year stretch.

With migraines often ceasing after age 55, Blake hoped she was in the clear. No such luck. They returned. And this time, with a “vengeance,” the former writer said.  “I would sometimes get migraines four times a day. One would subside, and another one would hit.”

“I would lose vision in my right eye,” Blake said, explaining her “aura,” vision changes that signal migraine onset in some patients. “It scares you to death.” For the period following the aura, which can last anywhere from hours to days, Blake couldn’t bear light or noise. She couldn’t stand the thought or smell of food. And, of course, her head pounded. 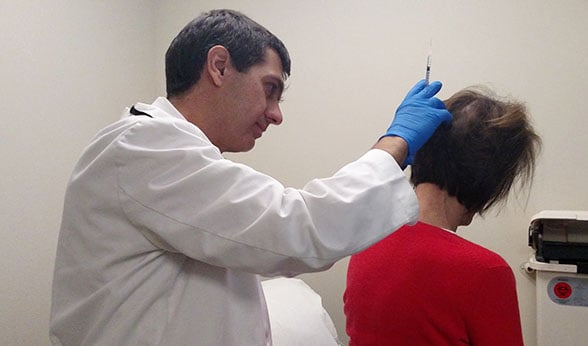 A passion for change

“Migraine is one of the most common neurological conditions,” said Birlea, assistant professor and director of Headache Fellowship in the CU School of Medicine Department of Neurology. More than 90 percent of sufferers are unable to function during episodes, and women who have auras with migraines are at increased risk of stroke, said Birlea, known for his research on possible migraine connections to viruses, such as shingles and herpes.

Passionate about changing the way migraines are viewed by the public and in the medical field, Birlea said migraines are under-recognized and under-treated.

Since its Food and Drug Administration approval in 2010, BOTOX® injections have been the standard of care for uncontrolled chronic migraines, Birlea said. “And it’s my understanding that of the millions of sufferers, a minority of chronic migraine sufferers are receiving it.”

When you get a doctor who is current in the research and has the ability to treat you well, it’s like dynamite. You can’t ask for anything better than that. – Carol Blake

Before finding Birlea, Blake had received minimal treatment over two months at home in Pennsylvania without real success. On her initial visit to the Aurora clinic, Dr. Birlea spent two hours in consultation with Blake and then began a battery of tests to rule out other underlying medical problems.

At the clinic on the CU Anschutz Medical Campus, Birlea and his staff use a comprehensive and collaborative treatment approach. Patients learn about nutritional and other triggers that can set off a migraine, such as stress, glaring lights and interrupted sleep patterns.

After discussing his extensive experience with BOTOX® and its effectiveness and minimal side effects, Birlea and Blake opted to try it. Along with the injections, Blake began taking B-12, magnesium and B-2, often effective in dealing with chronic migraine.

“That’s when we could see that we were beginning to get the headaches under control,” Blake said, adding that Birlea’s knowledge and approach made a difference.  “I know what a good doctor looks like, and it was like a dream finding him.”

‘Such faith in him’

During a recent injection procedure, after much small talk about everything from what college Birlea’s son had chosen to what traveling the Blakes had done recently, Birlea began the procedure, which, according to protocol, involves 31 tiny injections from the front to the back of the head.

“Her friends are all jealous of her forehead,” Jeffery Blake said, as Birlea worked. BOTOX®, which prevents migraines by blocking pain signals, allowing the brain to heal, also erases wrinkles.

As Birlea asked Blake to sit up from the exam table, so he could start the injections on the back of her head, she told an observing physician assistant in training: “I barely feel them. I’ve never felt much when he does it. He’s so good at it.”

Blake, who always hears the latest research news on migraines when she sees Birlea, said she was interested in a new injectable treatment to be offered soon that would not require her huge travel commitment. But she said she would remain Birlea’s patient regardless of her treatment plan.

“I’d still want to see him at least once a year. I have such faith in him. He is the essence of a really caring and competent physician.”