​Caring for a litter of puppies is the last thing Kara Arceneaux (DDS ‘20) thought she’d have time to do. Being in her final semester of dental school, she expected long days in the clinic. But that was before coronavirus, social distancing and global pandemic became common, everyday terms.

When the University of Colorado School of Dental Medicine closed all but its emergency clinics, Arceneaux discovered she had a lot of free time.

“Within the first few days of closure, I was missing the gratification that comes with the patient experience,” says Arceneaux, who, as a fourth-year student, spent the vast majority of her time in clinic. She looked around for an opportunity to volunteer and found the perfect stay-at-home situation: fostering abandoned dogs.

A week after applying to Moms and Mutts, a Colorado-based nonprofit that saves pregnant and nursing dogs and their litters, Arceneaux brought home a litter of eight.

Known collectively as the Emotions Litter: Hopeful, Grateful, Graceful, Truthful, Playful, Peaceful, Joyful and Colorful are labradoodle-mixed eight-week-old puppies from Texas. While she doesn’t know for sure, Arceneaux believes Shar-Pei, Catahoula and terrier are also part of the mix.

Arceneaux and her boyfriend instantly became attached and renamed them as Scruffles, Ruffles, Scraggles, Spots, Rhonda, Tiffany, Blue and Chunk—dependent on their nature and temperament.

“Scraggles is the runt but has the biggest attitude. Chunk is so squishy. Rhonda is brave and loves to cuddle. Blue tries to climb up your chest and steal kisses. Tiffany is gentle. Spots is so smart—and learned to ‘sit’ in one training session,” Arceneaux says. “They have a lot of personalities.”

There was no instant attachment for one member of the household. Addi, the couple’s three-year-old shepherd mix, had to warm up to the new house guests.

“After three days, Addi started becoming more curious. She would sniff them and watch them closely. By the end of the week, she was playing with them and even got a little cuddle time in.”

The fostering period can last from ten days to 12 weeks, depending on whether Moms and Mutts have found permanent homes for the dogs. For the Emotions Litter, it was time to adjust to being away from their mother. 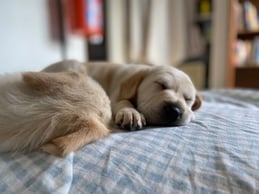 “They no longer shy away from human touch and instead come ask for it,” she says. “They’ve learned about bath time, how to play with a larger dog and two of them have discovered their barks.”

Despite some 2 a.m. crying and deworming medicine that caused some unpleasant side effects, Arceneaux was happy for the distraction the puppies brought to her time self-isolating at home.

“I am so thankful for the opportunity to get to know these sweet babies,” she says. “Their ability to be a distraction during this uncertain time and the sense of purpose they have given me has been so good for my heart,” she says.