Second-year dental student Dijana Elmejdoubi (DDS ’22) was ten years old when civil war tore through her home country of Bosnia ripping families apart and leaving her community shattered. But, instead of allowing her early life experience to defeat her, she overcame the darkness she had seen in the war and emerged with a deep appreciation for life and commitment to helping build community.

Elmejdoubi came to the United States from Bosnia in 2000 on a track scholarship she earned after competing in two World Championships and as a competitor in the 400-meter dash for Bosnia-Herzegovina in the 2000 Olympics in Sydney, Australia. After those games, Elmejdoubi was a top recruit for collegiate track and field programs in the U.S. After honing her English skills at a community college in Kansas, she ran for the University of Nebraska for a year before transferring to the University of Southern Mississippi. 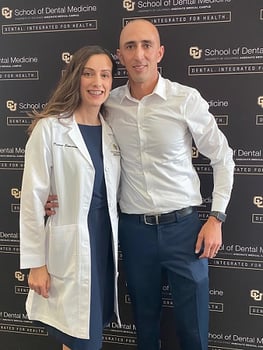 At Southern Miss, Elmejdoubi earned a degree in biology with a minor in chemistry all while setting records in the 400- and 800-meter dashes. Later she came to Colorado, attending CSU for a one year Master’s program in biomedical sciences. After graduation, she continued to run professionally---supporting herself by working as a chemist in the pharmaceutical industry.

Determination, resilience and commitment are all important qualities that have contributed to Elmejdoubi’s success in school and in life. Even though she had a very successful and fulfilling career as a chemist, she wanted more. Elmejdoubi wanted a chance to change things on a bigger scale. She wanted a chance to contribute to her community and give back to the country that gave her a new start. She saw the answer in her future career: dentistry.

“When I finished competing,” she says. “I thought I could focus on what I can do when I grow up. I explored medicine. My husband, Yousri, suggested dentistry. One of my training partners said, ‘my dad does root canals. You should shadow him.’ That’s when I found out what an endodontist is and that I wanted to become one.”

During her first semester in dental school, Elmejdoubi took a class called Community Engagement which set her on an important new pathway—both professionally and personally. Her driving force now is to close the gap in health disparity that she has seen first-hand while volunteering in community health clinics. These experiences inspired her to use her skills to make a positive difference.

“It really opened my eyes to some of the health disparities in this country and inspired me to help close that gap,” she says. “I love being out in the community, talking about the importance of oral health, and teaching people and kids about proper brushing techniques. The CU School of Dental Medicine offers affordable services to the community and provides students with a place to learn.”

Elmejdoubi was part of a dental student group that volunteered at Mercy Housing, a local and affordable housing organization, working to eliminate homelessness and housing insecurity for low-income families and seniors in the Denver area. The group provided free dental consultations, all while teaching the residents about the importance of good oral health. Soon Elmejdoubi will be a leader at the DAWN Clinic, a student-run free clinic in Aurora.

“Every community event, every on-campus and off-campus activity, Dijana is there, ready to help in any way,” says Deidre Callanan, clinical instructor and a team member of CU Dental’s Center for Oral Disease Prevention and Population Health Research (COPPR).

Elmejdoubi may have taken a different path to get to CU Dental, but she encountered one roadblock that halts a lot of students: the cost. That’s why she was pleased to receive some financial assistance as part of a scholarship award. That assistance helped pay for other expenses such as textbooks and reduced the size of the student loans Elmejdoubi had to take out. It also inspired her to become a donor once she starts working as an endodontist.

“Having this scholarship help means so much to me. It made a nice dent in my student bill,” says Elmejdoubi, who at 37 is older than most of her fellow DDS students. “Getting the scholarship definitely helps, especially if you have a family and go from supporting your family to one income. I don’t have to worry about not having enough money for food.”

She is excited by the road ahead and the next chapter in her life story as a dentist and community builder. “I have a lot of respect for the profession and I am humbled by the chance to be part of the dental community,” Elmejdoubi says. “I feel it’s crucial to give back to communities,” she says. “it’s one of the things that fill my heart with joy.”