Fredric Pieracci, MD, MPH/MSPH, an associate professor in the University of Colorado School of Medicine Department of Surgery, is the senior author on a new paper published in Surgery for Obesity and Related Diseases that details the results of a public health initiative to provide affordable bariatric surgery to uninsured Denver County residents.

As director of the Denver Health Bariatric Surgery Center, Pieracci says he and his team have performed more than 500 bariatric surgeries over the past decade. Because Denver Health is a public safety-net hospital that receives money from the city, state, and federal government, almost all of those surgeries were performed on patients with Medicare or Medicaid insurance. None of the patients were uninsured.

“We were getting four or five — sometimes even 10 referrals a month for bariatric surgery that we had to turn away because they didn’t have insurance,” Pieracci says. “That's when we started meeting as a team to try to come up with a solution.”

Those initial meetings eventually culminated in a new public health initiative spearheaded by Pieracci and his team.

Pieracci and his team started by creating a petition. “It was kind of a grassroots movement,” he says. The petition stated that bariatric surgery should be offered to all members of our community regardless of their ability to pay. They received more than 100 signatures from Denver Health providers across multiple departments, from registered dietitians to psychologists to endocrinologists.

“The bariatric surgery program is very collaborative and multidisciplinary,” Pieracci says. “We used that to our advantage when we were discussing with our administration the notion of funding surgery for uninsured patients.” 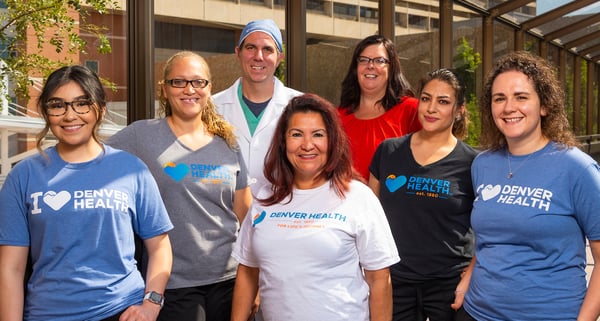 Fredric Pieracci, MD, and other members of the bariatric surgery team at Denver Health.

After garnering support from their colleagues, Pieracci and his team met with Denver Health’s Medical Necessity Committee, a group responsible for deciding which surgeries and other procedures are approved for patients without insurance. Life-saving treatments, such as cancer surgeries, are automatically approved, while procedures like cosmetic surgery are usually denied. Bariatric surgery existed in a gray area.

“It had never really been considered by that committee,” Pieracci says. “So we made a presentation explaining why we thought bariatric surgery should be covered, using the logic that the committee already covers surgeries that increase patient's lifespans or help with other serious health problems. We said that bariatric surgery should be in that same category because we know that it increases longevity and cures things like high blood pressure and diabetes.”

The committee agreed, leaving one final hurdle: administrative and budget approval. For their meeting with hospital administration, the group framed the argument as a financial one. They collected existing studies on the cost-effectiveness of bariatric surgery, as well as pulling in their own data.

“We collected about six months of data on our current bariatric patients and were able to show that they were less likely to show up in the emergency room for issues related to diabetes and high blood pressure after surgery,” Pieracci says. “Since most of those ER costs are passed on to the hospital, the financial argument is a very sound one: we can do one surgery upfront and prevent a lifetime of complications.”

Pieracci and his team got approval to perform one to two bariatric surgeries for non-insured patients a month as part of a public health initiative for patients enrolled in two assistance programs: the Denver Health Financial Assistance Program and the Colorado Indigent Care Program.

So far, 30 uninsured patients have benefitted from the program, and the results have been impressive.

“Overall, the outcomes we've seen in our uninsured patients are the same as we've seen in our insured patients,” Pieracci says. “Which is that by the one-year mark they’ve lost about 70% of their excess weight. About 80% of patients who had diabetes are cured of their diabetes, and about 70% who had high blood pressure are cured of that. It's a huge quality-of-life change for our patients who can stop taking those injections or medications.”

Pieracci hopes to serve even more uninsured patients in the future through the program. But he also thinks that to truly combat the problem, we need to reshape how we think about both poverty and obesity.

“Patients of lower socioeconomic status are more likely to be obese, and they're also less likely to have access to affordable bariatric surgery,” he says. “And there's still a stigma where some people think bariatric surgery is the easy way out and that patients just need to deal with their weight themselves. I couldn't disagree with that more.”

Hopefully, the team’s recent publication will be a step toward breaking down that stigma.

“This project was born out of shared passions and scholarly interest to help explain why it's so important to increase access to bariatric surgery for patients who historically have not had access to it,” says William Mundo, a third-year medical student who worked with Pieracci as part of the Denver Health Longitudinal Integrated Clerkship and who served as first author on the paper.

Pieracci agrees. “They're a group of people who are often forgotten by the healthcare system, so it's really special to get these patients into our program and know that we've helped people who otherwise didn't have a lot of options,” he says.