The U.S. Department of Defense is funding a study by Arek Wiktor, MD, associate professor of GI, trauma, and endocrine surgery and interim medical director of the UCHealth Burn and Frostbite Center – Anschutz Medical Campus, to aid in treatment of military and civilian burn patients.

The $1.5 million grant from the Department of Defense Military Burn Research Program will be used to study the effects of two colloids, plasma and albumin, in acute burn resuscitation over a three-year period.

“When someone gets a large burn, over 20% of their body, they require a large amount of intravenous fluid to support their organ systems,” Wiktor says. “That’s called a resuscitation. Many different formulas have been developed to try to calculate how much fluid to give. You don't want to give too much fluid because it can flood a patient’s lungs; it can cause a lot of complications. If you give too little fluid, then their organs can also suffer. There's a fine line.”

Like most hospital patients, burn patients receive what are known as “crystalloid fluids” — the clear IV fluids, such as saline, that typically hang over a hospital bed. But burn patients also receive “colloid” fluids — a type of protein-containing solution that is used to treat patients who need critical replenishment.

“The two most common colloids are plasma, which is a component of blood, and albumin, which is a protein found in plasma,” Wiktor says. “And there’s a debate about which one is better. Our burn center’s standard of care is to use the plasma, but other burn units’ standard of care is the albumin. This study is trying to see, ‘OK, if both are being used by different burn centers, is there one that’s better?’”

In his DOD-funded study, which will start enrolling patients soon and run for three years, Wiktor will treat patients in the UCHealth Burn Center with both types of colloids to see which one provides better patient outcomes. The goal is to ultimately reduce the amount of fluid used in resuscitation, as well as to reduce the effects of a blood vessel complication that can happen in traumatic injuries such as severe burns.

“We’ve known for about a decade that when people get injured — if they’re shot, or stabbed, or in a car accident — that trauma causes inflammation that can translate into shedding of the lining of the blood vessels known as the glycocalyx,” Wiktor says. “And that can cause other downstream effects. When the white blood cell sees an exposed lining of the blood vessel, they can get activated and can cause more inflammation – this can cause more fluid to leak out, causing more lung and organ damage. It's a vicious cycle.”

Anticipating the future of warfare and improving outcomes

The study is of particular interest to the U.S. military, Wiktor says, due to the new types of weapons that are being invented. The future of warfare will result in more blast and burn injuries that will need to be treated quickly and effectively.

“They’re curious about how we can treat soldiers or civilians with better burn care earlier,” says Wiktor, who received the DOD grant with the help of the CU Anschutz Center for Combat Medicine and Battlefield (COMBAT) Research. “We want to see if we can decrease the amount of fluid that patients require, or if we can decrease their complications. It's a very complex system to transport patients from the battlefield to a hospital, so the military is interested in seeing if there are therapies that can help stabilize a person more efficiently early on.”

Vik Bebarta, MD, director of COMBAT Research, says, “The CU Anschutz Center for COMBAT Research is thrilled to support cutting-edge scientists like Dr. Wiktor who are creating breakthroughs in medicine.”

The results of the study will have benefits to all burn patients, Wiktor says, as they will can reduce complications caused by overuse of fluids and allow doctors to develop protocols and strategies to mitigate damage to the blood vessel lining.

“Hopefully we can begin to answer the question of which type of fluid resuscitation strategy is better,” Wiktor says. “That may lead to further advancements and developments in resuscitation so that we can push the envelope in improving burn care. We’ve been resuscitating patients the same way since World War II, so we need to move into the 21st century. Plus, if we show that there is an effect on the lining of the blood vessels, then we can hopefully develop therapeutic strategies to help minimize that damage, which may in turn help improve outcomes later.”

The views expressed in this article are those of the author and may not reflect the official policy or position of the Department of the Army, Department of Defense, or the U.S. government. 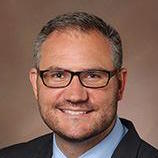