From Silly Putty to the microwave oven, there is a long history of consumer products “accidentally” discovered during the scientific discovery process.

Add to that list NanoSilk, a silk-based skin cream created by University of Colorado School of Medicine faculty member Ken Liechty, MD, a pediatric surgeon at Children’s Hospital Colorado. Looking for ways to aid healing in diabetes patients, whose skin doesn’t heal as quickly or thoroughly as that of people who don’t have diabetes, Liechty hit upon a way to suspend actual silk particles in pluronic gel. It didn’t take long to discover the resulting product had beneficial effects for all skin types.

“Silk is a strong fiber,” says Liechty, a professor of surgery. “In diabetics, the extracellular matrix is impaired, so we thought a fiber could strengthen the skin at baseline. Then we saw additional effects, like hydration and smoothing out the appearance of fine lines and wrinkles. When you use the cream, it feels like your skin actually tightens up as it dries.”

Working with CU Innovations, Liechty created Le Ver, a cosmetic company that offers two NanoSilk products — a face cream called Scaffold, and an eye cream called Restore. He brought another CU School of Medicine faculty member, Brooke French, MD, an associate professor of plastic and reconstructive surgery, into the fold to test the product on her patients and conduct research on its effects.

“Once Ken realized its cosmetic qualities and potential impact, he really ‘grassrooted’ it,” French says. “He gave samples to colleagues and nurses who wanted to try the product. And he garnered a bit of a cult following from it. Everybody wanted to try it. I tried it, and I thought it was an outstanding product.” 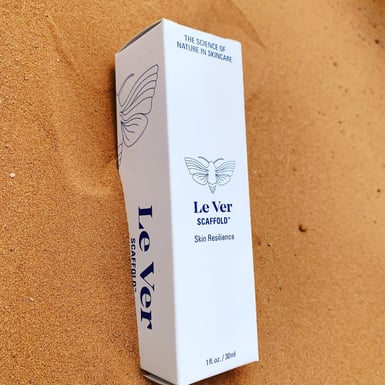 Scaffold, a face cream, is one of two products currently offered by Le Ver. The other is an eye cream called Restore.

With the help of CU School of Medicine resident Amanda Louiselle, MD, Liechty and French began to record the reactions of those using the product. In April 2021, they published a paper, “Evaluation of skin care concerns and patients’ perception of the effect of NanoSilk Cream on facial skin,” compiling the results. A majority of participants said the product gave them “excellent” benefit in skin care concerns including overall skin appearance, hydration, smoothness, and firmness.

“There was one woman who said, ‘I’ve always had very dry skin. I tried so many high end brands of skin care that I'm embarrassed to think of how much I’ve spent,’” Liechty says. “She said, ‘This is the first cream I've used that keeps my skin feeling moisturized and healthy all day. I've noticed that wrinkles are not as visible, and that it actually looks like my face is firmer. I can't imagine not using it now.’”

Next steps to effectiveness and commercialization

Recently, French received a grant to buy a special 3-D cosmetic camera system to provide more objective measures of NanoSilk’s effectiveness, and the team is working on another paper, to be published later this year, detailing those findings.

NanoSilk is currently available online and at French’s cosmetic clinic at the Anschutz Health and Wellness Center, though the team hopes the forthcoming paper will help to spread the word about the product. Liechty is the first to admit that he doesn’t have the time to go out and be a skin care rep, and that trying to start a company on top of his other duties is more challenging than he expected.

“It’s a lot of drinking through the firehose, trying to figure out how to build a company,” he says. “The stage between having an idea and actually having a product, they call that Death Valley. And to get to get out of Death Valley and actually take the idea and commercialize it is a huge step.

“I'd love to see it take off,” he continues. “I’d love to see people use it and benefit from it and it take on a life of its own. We've been very organic about growing it so far. We haven't been out there pitching at shopping malls or doing infomercials to talk about it. We just like that people like it and use it. We have several people who routinely, every three months, buy three bottles.”