A friendship between two couples that began over CU football games ended up saving a life—and leading to the promise of more lives saved in the future.

Teri Trafton and her husband Charlie have been attending CU Buffs football games for years. That’s where they met another couple, Char and Lee Snyder, who are also longtime season ticket holders. The two couples saw each other regularly at games and struck up an acquaintance.

When the Traftons learned that Char Snyder had kidney disease and would need a transplant, they were concerned, but Lee told them a donor had been found, and they thought everything would be fine. However, when they saw Lee the following football season, they learned that the donor had turned out to be incompatible and that Char had taken a turn for the worse. She was now undergoing regular dialysis and faced a likely wait of 3-4 years for a deceased-donor transplant. Her doctors didn’t think she would make it that long. 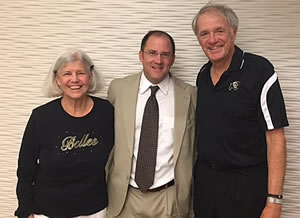 That’s when Teri Trafton decided to donate one of her own kidneys to Char. After review of all her testing, doctors concluded that she was a great match.

Dr. Peter Kennealey and Dr. Thomas Bak performed the transplant surgeries at University of Colorado Hospital. The surgery went beautifully for both women.

The Snyders were so grateful for Teri’s gift and Char’s recovery that, mere months after Char’s release from the hospital, they established the Trafton-Snyder Endowed Fund in Kidney Transplantation. Their generous gift will support the Division of Transplant Surgery, with a focus on kidney transplantation and care for end-stage renal disease.