A tool designed to help surgical trainees practice skills such as knot tying, suturing, vascular and bowel anastomoses, and other techniques has helped eliminate barriers to simulation resources.

The results of a study recently published in Surgery in Practice and Science show that of the 30 general surgery residents surveyed, having access to the GlobalSurgBox significantly improved their ability to practice essential surgical skills.

The GlobalSurgBox was originally envisioned by Yihan Lin, MD, MPH, a cardiothoracic surgery fellow in the University of Colorado School of Medicine Department of Surgery.

“The concept of the GlobalSurgBox originated out of necessity – I needed a way to teach my junior residents how to do certain anastomoses,” Lin explains. “I wanted them to practice beforehand so they could shine in the operating room, but I was having a hard time finding an effective and realistic way to do this in a low-stress environment.”

“We have a state-of-the-art simulation center on campus, but it's on the other side of the university complex and our residents may not feel like walking over there when they’re working 80 hours a week,” Lin says.

Lin and her colleagues envisioned a more portable and affordable method of simulation. Using a wooden board as the platform for all the surgical exercises and commonly available supplies, they included fishing line and shoelaces to practice knot tying, hair ties for suturing practice, and linear balloons for vascular anastomoses. They organized all the supplies in a 12-inch toolbox for portability, creating the GlobalSurgBox.

Lin mentioned the GlobalSurgBox to a friend in Kenya training to be a cardiac surgeon, who was very enthusiastic about also getting one for practice. Soon thereafter, his program director asked for a GlobalSurgBox for every surgical resident in his program.

In May 2021, with a donation from Jay Pal, MD, PhD, an associate professor of cardiothoracic surgery, Lin and a group of colleagues assembled the first 50 GlobalSurgBoxes. The idea was that for every box created for a CU School of Medicine student or resident, participants would create a second box for medical partners in low- or middle-income countries.

At a GlobalSurgBox event in May 2021, members of the Colorado Global Surgery Student Alliance made 50 boxes – 25 for CU School of Medicine students and 25 for students and residents in Kenya

Through several iterations, the GlobalSurgBox has evolved into a training tool that can be assembled with inexpensive, readily available items and adapted to various countries or medical contexts, Lin says.

“I think it’s important to contextualize it based on what setting you’re working in,” Lin says. “We were just in Rwanda and they’ve modified the box to be able to practice suprapubic catheterization, which is something we don’t do as general surgery residents here but they need to know how to do in their context.” 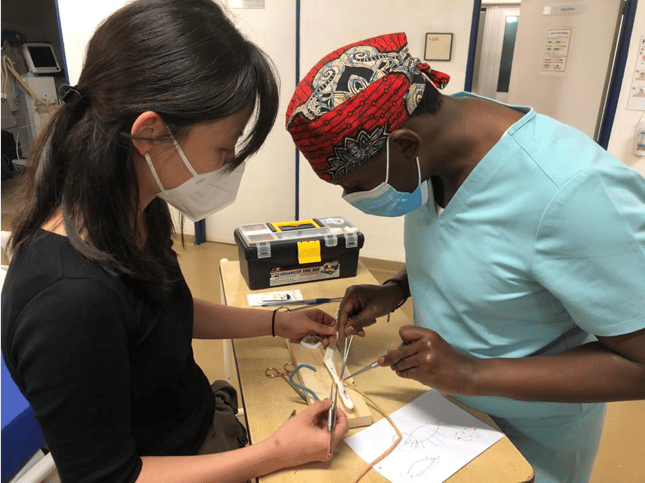 As more CU School of Medicine students and residents have participated in making and adapting GlobalSurgBox, some have created a website and instructional videos with skills training. Students have put together a comprehensive guide on how to assemble a box, from links to purchase each of the materials, documents to guide in assembling a GlobalSurgBox, and even templates on how to write grants so that this can be scaled up to other institutions. This will support students and surgical trainees in countries outside the U.S. to assemble boxes with locally available materials, Lin says.

Students and residents have also been creative about adapting the box and continuing to create cheaper and better iterations. Students initially were using synthetic skin samples commonly used by tattoo artists to practice suturing, but later found that yoga mats were just as helpful and at a fraction of the cost. In Kenya, where yoga mats are not as ubiquitous as in the U.S., medical students and residents modified the GlobalSurgBox to use flip-flops instead.

Others have cultivated relationships across campus so they can collect unused surgical instruments such as needle drivers and forceps that otherwise would be thrown away.

In quantifying the utility and usefulness of GlobalSurgBox for surgical residents, Lin and her colleagues found that of those surveyed, only 3.3% reported routinely using institutional simulation resources such as simulation centers on campus. The most commonly reported barriers were lack of convenient access and lack of time. After using GlobalSurgBox, 90% of residents surveyed stated that lack of convenience or time was no longer a barrier for practice.

“The beauty of this box is that it’s truly adaptable to any setting, and the user is in charge of creating a simulator that fits their specific needs,” Lin says. “It has been used by medical students, residents, fellows, and teaching faculty in multiple programs and countries around the world. This is a resource that’s easy to put together and easy to use.”