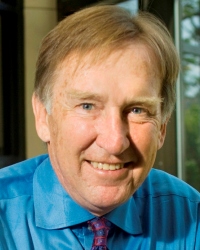 Seventeen years after he had a liver transplant, Jon Zeschin got sick.

For 36 hours, he couldn’t keep anything down, even water. Finally, early on a Saturday morning, he went to the Emergency Department (ED) at the University of Colorado Hospital (UCH).

To Zeschin's amazement, within one hour, Igal Kam, MD, chief of the Division of Transplant Surgery—and the same physician who had performed his transplant surgery nearly two decades earlier—walked into the room.

“The first thing he said was ‘Why didn’t you call me when you were sick?’” said Zeschin. As a group of physicians filled the small ED room to discuss Zeschin’s case, Kam took the lead.

“With his hand, he found one spot on my belly and pushed hard on it,” Zeschin said. “Then he said ‘We’re done’ and walked out of the room. The entire medical team stared after him with a look that said ‘What was that?’”

Eventually, Zeschin would need surgery to repair a hernia, but on that morning, Kam gave him immediate relief with his bare hands. For everyone involved, the entire experience was a classic example of how Kam has run the Transplant Program at the University of Colorado Anschutz Medical Campus for the past 25 years.

“Organ transplant is a commitment,” Kam said. “It’s only five or six hours in a patient’s life, but it’s a contract for life between us and the patients. Any time in your life after the transplant, if we can help you, we will try.” 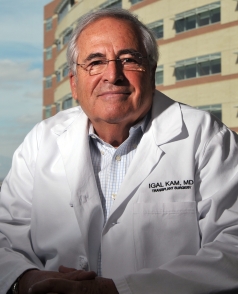 For Kam, transplant surgery is “some kind of addiction. It’s hard to live with it and impossible to live without it.”

His career path began in 1982 when, as a young resident in general and vascular surgery in Haifa, Israel, he found himself caring for casualties on both sides of a war between Israel and Lebanon. Some of the patients needed liver surgery.

“People were dying,” he said. “Somebody needed to go learn major liver surgery.”
So Kam went to Pittsburgh to study under Thomas Starzl, MD, who had recently left Colorado General Hospital (now University of Colorado Hospital). During his 19-year tenure there, Starzl had pioneered kidney and liver transplants.

Under Starzl in Pittsburgh, Kam was the right person in the right place at the right time. As Starzl built Pittsburgh’s transplant program (his team did 200 liver transplants in 1984), Kam found himself increasingly excited by the possibilities of the field.

“It was a huge experience for me,” he said. “I couldn’t go back to general surgery.”

After brief stop-overs in Brazil and back in Israel, Kam was recruited by UCH in 1988. The UCH Transplant Program had closed down when Starzl left, and Kam would be starting over, so he hesitated before finally agreeing to resurrect the program.

“You want a place that has done a lot of these …” 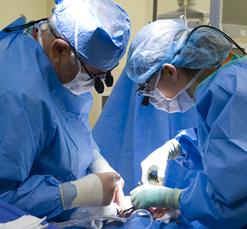 Kam was eight years into his quarter century at the UCH Transplant Program when Zeschin became his patient. As a 43-year-old who had lived with autoimmune hepatitis for nearly 20 years, Zeschin knew that it was not a matter of if he would need a liver transplant, but when.

As the disease progressed, Zeschin, who lived in Colorado, considered four transplant centers of excellence around the country. Then he consulted with the Chicago physician who had treated him for many years.

“He said to me ‘Assuming you make it to the transplant, you want a place that has done a lot of these,” Zeschin said. “‘University (of Colorado) Hospital is right there. It has everything you need.’”

Zeschin still remembers what he calls the “moment of truth” during the pre-transplant psychiatric evaluation, when the interviewer asked if he understood what would happen if he didn't get a transplant.

When Zeschin met Kam he knew he was in the right hands. “He is a take-charge guy, and that inspires confidence.”

“The Good, the Bad and the Ugly” 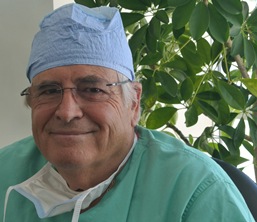 In the past 25 years, Kam has reinvented the university’s transplant services, transplanting some 1,800 livers, 3,000 kidneys and 150 pancreases. He performed the first "adult to adult" live donor liver transplant in the Western world. One-year survival rates after liver transplants stand at 85 percent nationally; at the University of Colorado they are 90 percent.

Kam wants to see the program continue to grow, and he describes himself as someone who is “still learning, trying to push the envelope.” Sitting in his spacious Anschutz Medical Campus office, with its panoramic view of the Front Range Rocky Mountains, Kam remembers that he started at the old Ninth Avenue and Colorado Boulevard campus, sharing a desk with a secretary.

“What I learned is that no one would hand anything to us on a silver tray,” he said. “We had to push, push, push to achieve recognition and grow. We had to convince the university, the hospital and the medical school to understand the need, take the challenge and support our success.”

On a warm July morning, Kam has come straight out of the operating room, and he is still wearing surgical scrubs. He barely has time to exhale before a cell phone rendition of the theme from the movie, “The Good, the Bad and the Ugly,” makes further conversation impossible. Kam pulls out his phone, answers the call and, for the next several minutes, mostly listens. Occasionally, he interrupts with a brief comment or question:

“I don’t know enough about this donor.”

“What more can you tell me?”

After the conversation ends, he offers an explanation: “I didn’t say ‘No’ to the organs, because I don’t want to miss an opportunity. But we can’t accept bad organs, and we don’t.”

Asked about his ringtone, he smiles. “I like [“The Good, the Bad and the Ugly”] as a sound,” he said. “With transplants, you need something that will wake you up at night.”

Kam is quick to point out that he is not the only person who is getting up in the middle of the night to handle the 247 demands of transplant surgery. As medical director of the Transplant Program, he heads a team that includes transplant surgeons, operating room and intensive care unit nurses, nephrologists, hepatologists, anesthesiologists, pathologists, radiologists, transplant coordinators, social workers, psychologists, financial counselors and support staff.

“I’m blessed with an excellent team, a stable team,” said Kam. “That’s why we’re so successful.”

Zeschin attributes his great transplant experience to the transplant team. “Transplants don’t just help people survive for a few more years,” he said. “There’s no reason people can’t live for another 30 to 40 years. [The university] has put together a team that supports that

While other surgical procedures may become less invasive in the future with the use of laparoscopic techniques, Kam does not see the basics of liver and kidney transplant surgery changing—but he does anticipate there will be technical improvements.
“That’s part of our job,” he said. “We don’t take for granted anything we do just because it is the way we were taught to do it. That’s how we got to where we are today with transplants.”
While he watches bioengineers research the possibilities for organs to be created by 3-D printers, Kam lobbies for more attention for organ donation, so that patients won’t die on the waiting list. He floats the idea that families of donors should receive some kind of social support.
“I’m not talking about money on the table,” he said. “But if a family loses the main money-maker and donates organs, couldn’t society do something for them?”

Then, “The Good, the Bad and the Ugly” rings again, and Igal Kam is back in the world he loves—talking about a donor who made the decision to help someone in need and a patient waiting for a second chance.