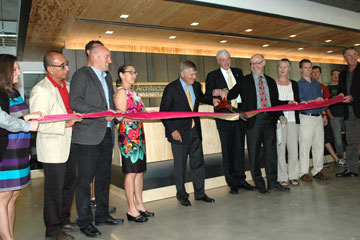 “Nearly everyone has a personal experience with cancer, as a survivor or as a caregiver for a family member or loved one fighting the disease,” said Bruce Schroffel, president and CEO of University of Colorado Hospital.  “We want to be able to treat as many people as we can, but we are literally out of space. This expansion campaign will provide us with the crucial room to meet the demand for our services.” The cancer center expansion campaign is called “When You Hear the Words, ‘You Have Cancer.’”

University of Colorado Cancer Center treats the most complicated oncology cases and helps more patients than any single cancer center in the Rocky Mountain region. The hospital’s cancer specialists and sub-specialists are uniquely qualified to provide the most advanced care to the most complex patients. UCCC is the only comprehensive cancer center designated by the National Cancer Institute in the region.

The expansion also will allow for more clinical trials by adding more space and more physicians and researchers.  At University of Colorado Hospital, hundreds of clinical trials are underway in an ongoing effort to discover and deliver more effective treatment. The goal is to translate discoveries made in the laboratory to the patients who will benefit from them, as quickly as possible.

“The care people receive at University of Colorado Hospital is world-class. When it comes to cancer care, the combination of clinical care and research means patients have options that can’t be found anywhere else in the Rocky Mountain region,” said Steve Bangert, chairman of the Cancer Center Expansion Committee and chairman and CEO of CoBiz Financial. “The Cancer Center Expansion Committee’s fundraising effort is nearly halfway to the $20 million goal. The whole committee is determined to raise the rest as quickly as possible so we can meet the demand for our cancer care.”