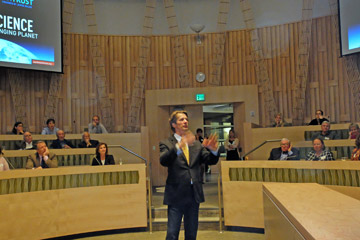 Over the last year, Robert Roach and his fellow researchers have traveled the world’s high places searching for clues into how people adjust to the challenges of altitude.

Their mission has taken them from Breckenridge to Bolivia and beyond.

“This isn’t just about recreation and mountain climbing,” Roach said. “Our research has major implications for lung disease, heart disease and even cancer. We believe our work can lead to new treatments and drugs.”

Roach, PhD, was speaking last Tuesday at a reception for the Altitude Research Center (ARC) where he serves as director.

The center, part of the University of Colorado School of Medicine, is the only civilian institution focused on studying the effects of altitude on human physiology.

More than 100 people came to learn about the latest research, including famed mountaineer Tom Hornbein, MD, who scaled Mount Everest via the daunting West Ridge in 1963. Hornbein chairs the ARC Foundation.

Academy-award nominated photographer and National Geographic contributor, James Balog, was also on hand to talk about his work on climate change.

Balog has stationed more than 30 time-lapse cameras from Greenland to Mount Everest, capturing stunning footage of glaciers in full retreat.

The evening was a celebration of ARC’s mission to “improve life through research on how hypoxia affects health and performance.”

Hypoxia occurs when the body is deprived of sufficient oxygen, resulting in anything from headaches and nausea to life-threatening cerebral or pulmonary edema.

For months now, the center has been testing subjects brought to high altitudes to better understand the genomic basis of how they respond to hypoxia, or acute mountain sickness (AMS), and perhaps even how to cure the ailment.

A new test by Roach can now predict with 90 percent accuracy who is likely to get sick and who isn’t.

In 2012, the team spent the summer at 17,200 feet near the summit of Mount Chacaltaya in Bolivia studying 21 college students from Eugene, Oregon. They hoped to determine how the subjects adjusted to a low-oxygen environment. While the results are still pending, some intriguing observations were made.

“When people acclimatized and then went to a lower elevation they did not seem to lose the benefits of acclimatization when they returned to altitude,” said Ryan Patterson, MD, one of the CU School of Medicine researchers who accompanied Roach to Bolivia. “Our research is the first to show that these benefits persist.”

But those benefits fade somewhere between seven and 21 days of leaving the mountain, he said.

Roach told the audience inside the Fulginiti Pavilion on the Anschutz Medical Campus that if they were immediately taken to the top of Everest most would lose consciousness and die within 30 minutes. And yet, with time to acclimate, they would likely survive.

Roach hopes to market an AMS test kit so those likely to get sick can take precautions before going to altitude. He also wants to study populations living in the high mountains of Ethiopia and Ladakh to see how they have adjusted genetically to their environment.

“Skiers, climbers, soldiers and those suffering from a number of serious medical conditions can experience the results of our research,” Roach said.

Balog then took the floor and began showing his remarkable time-lapse footage of melting glaciers.

His documentary, Chasing Ice, has won worldwide acclaim for its depiction of the slow, inexorable retreat of earth’s great ice sheets.

“The story of climate change has typically been told with charts and graphs that appeal to the left brain,” said Balog, who lives in Boulder. “I felt what was lacking was a more visual approach that would touch the right side of the brain.”

Balog explained that a glacier is a very slow moving river of ice that forms when more snow falls in winter than melts in summer.

“The vast majority of glaciers around the world are retreating due to warmer temperatures,” he said. “But I realized that photos were not enough. So we built a whole network of time-lapse cameras, powered by solar energy and timed to fire every half-hour to make a record of these melting glaciers.”

His cameras capture glaciers literally shrinking to nothingness. Others melt before viewers eyes. In the Andes, he said, glaciers are retreating one to three vertical feet per year.

“Glacier National Park will need a new name soon because all the glaciers will vanish in a few decades,” he said.

Skeptics of climate change believe earth goes through natural heating and cooling cycles and reject the notion that humans impact those phases.

Balog was once a skeptic himself. Then he traveled to the Arctic in 2005 for a National Geographic assignment on climate change. What he saw changed his life forever.

“Humans have always felt that the basic operating system of the earth would take care of itself. But the idea that the earth is unchangeable is quickly disappearing,” he said. “We have entered what some scientists call the Anthropocene era which says that we are the dominant agent of change on earth today.”

The notion that humans can’t impact the planet, he said, “is going into the dustbin of history.”