A simple goal motivates Kyle Adrian Kenyon: make his community healthier, smarter and more engaged. Kenyon, a bioengineering student, is a dynamo of academic and athletic activism – he mentors fellow students as well as Colorado Rapids youth soccer players – all while dealing with a host of personal challenges.

Kenyon struggled with test-taking anxiety while he earned bachelor's degrees in biomedical engineering and molecular & cellular biology at the University of Arizona. However, it wasn’t until he arrived at the CU Anschutz Medical Campus as a bioengineering graduate student that he discovered he had a significant learning disability.

“I came here without knowing anyone and, working with Sherry (Holden) and Selim (Ozi) in Disability Resources and Services, I found out I’m dyslexic; I have a reading and writing learning disability,” Kenyon said. “Once diagnosed, I received accommodations and was able to demonstrate my knowledge.” Holden also referred Kenyon to Dominic Martinez, senior director of the CU Anschutz Office of Inclusion and Outreach, to assist him in the application process to the CU School of Medicine (SOM).

The diagnosis gave Kenyon a new perspective on some of his past challenges while opening the door to greater academic success. “I finally know what it feels like to get a 4.0 (GPA),” he said with a smile.

Kenyon is quick to credit others, specifically campus support services, for his achievements. With Martinez’s help, Kenyon, who expects to graduate with a master’s in bioengineering in spring 2017, is applying for the Medical Scientist Training Program in the SOM. “I’d like to combine the clinical, engineering and scientific research fields to be essentially a translational physician, doing bench-to-bedside work.” 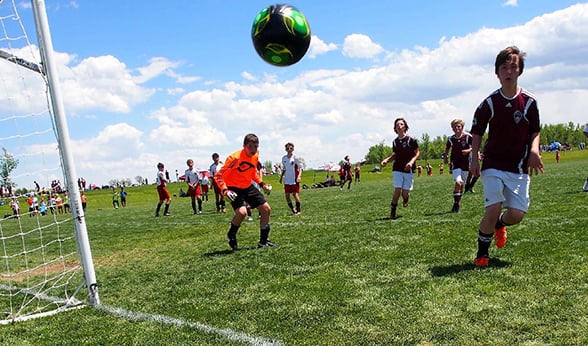 Bioengineering student Kyle Adrian Kenyon is a youth coach and an organizer of Colorado Rapids outreach programs at schools in Denver and Aurora.

Performing a broad assortment of work suits Kenyon well. Besides being a full-time student, he works part-time as both a youth coach and organizer of Colorado Rapids outreach programs at schools in Aurora and Denver. Just as the Rapids professional club is on a roll this season – the team has advanced in the Major League Soccer playoffs – the club’s nonprofit youth-program arm provides after-school exercise for thousands of kids.

“We’re discussing the possibility of doing a public health study, related to the potential benefits of after-school exercise for kids, in collaboration with Elaine Belansky,” Kenyon said. Belansky, PhD, is an associate professor in the Colorado School of Public Health (ColoradoSPH).

“What I like about the Rapids is the element of trying to make the community better,” he said. He’d like to expand his youth soccer work, as he sees “really big potential” in the development of a relationship with the ColoradoSPH at CU Anschutz.

Kenyon played soccer throughout his childhood and at the intramural level in college. He can be seen wearing his Colorado Rapids training jacket around campus.

Kyle Adrian Kenyon is active in both sports -- he works part time for the Rapids youth division -- and academics. He serves as vice president of the Biomedical Engineering Society, which encompasses students at CU Anschutz and CU Denver.

On the academic front, Kenyon is vice president of the Biomedical Engineering Society, which encompasses students at CU Anschutz and CU Denver. The group holds “pitch nights” where faculty from both campuses explain research projects with the hope of engaging student workers in their labs.

In the future, Kenyon would like to hold “Engineering Clinics” where students in the Bioengineering Department (College of Engineering and Applied Science) offer basic engineering tutorials at area middle and high schools. “I like to build relationships and create things that help a great many people, all the while using my skills and knowledge in the most effective manner,” he said.

In just his second semester in the bioengineering graduate program, Kenyon saw his GPA vault to 3.9 (from 3.3). “There’s tangible improvement,” he said. “It’s been helped by those offices (Disability Resources and Inclusion and Outreach), and my new understanding of where my strengths and weaknesses are.”

Martinez said Kenyon has been an impressive mentor to undergraduate pre-health students on both campuses. For example, Kenyon used Microsoft Excel software to develop a GPA calculator that helps students track their progress while preparing for medical school and other graduate-level programs.

Martinez has been able to relate to Kenyon on many levels, including the dyslexia. “I had the same issue; I didn’t find out until graduate school that I was dyslexic,” he said. “The thing about Kyle is he’s risen to the occasion, and he doesn’t make excuses about it. He continues to move forward to be a better student and just to be a better person.”

Kenyon’s strong sense of empathy, balanced with a curious and analytic mind, is a prized characteristic in today’s sometimes impersonal world. His outgoing personality allows him to pivot with ease between a scientific environment – doing research in a lab – and various “soft skill” settings, such as communicating on the soccer field, in the classroom and in the lab.

“I feel I’ve been on a long, meaningful road,” he said. “It’s made me very flexible. Because of the struggles in my life, I feel I can understand and relate to people in many meaningful ways.”