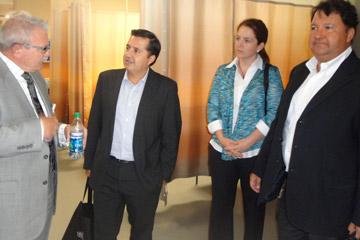 AURORA, Colo. (July 23, 2013)  – When Fernando and Gustavo Bolaños gave the Colorado School of Public Health $1 million to build a medical center on their banana plantation in Guatemala, they expected results and they expected them fast.

Yet with little more than 10 acres of empty land and dozens of vague plans swirling about, that seemed a tall order.

On their first visit to the University of Colorado Anschutz Medical Campus last week, the Bolaños brothers learned just how far and how fast things had come in barely a year.

Plans are now afoot to rotate doctors, dentists, nurses and public health students through the facility. Funds are being raised to sustain the project for decades and, perhaps most exciting of all, the clinic is expected to open in January 2014.

“In the over 35 years I have been in global health, this is the project I am most excited about,” said Stephen Berman, MD, director of the Center for Global Health, part of the Colorado School of Public Health, which is overseeing the project. “The solutions we develop through this program may someday be replicated in communities all over the world.”

The Bolaños family owns AgroAmerica, one of the world’s largest fruit producers. They donated the money and land to provide medical care for their 3,000 banana plantation workers as well as the 24,000 residents of the surrounding villages.

The Trifinio Project, named for the region of rural southwest Guatemala where it will operate, is expected to reduce malnutrition, complications of pregnancy, diarrhea, parasites and anemia while also dealing with teen pregnancy, illiteracy, sanitation and clean water.

“What we have seen this week has left us very optimistic that we will effect major change not only in Guatemala but in the rest of the world,” Fernando Bolaños said.

A people hungry for health care

The Bolaños brothers and their wives stayed busy all week. They met with CU President Bruce Benson, University of Colorado Denver Chancellor Don Elliman and CU School of Medicine Dean Richard Krugman. They also toured Children’s Hospital Colorado and visited the new emergency department at the University of Colorado Hospital.

Perhaps most importantly, they were thoroughly briefed on the status of the project.
Edwin Asturias, MD, director for Latin America at the Center for Global Health, offered some sobering health statistics about the targeted population:

Asturias, a pediatrician originally from Guatemala, said the medical center could see a flood of people once it opens. He grew up in the Trifinio area and often takes medical students there to treat villagers.

“People are so hungry for health care that they will come in for even small things. We never say no so we end up seeing 20 people when we meant to see 10,” he said. “We might need to have them see a nurse at a health post first and if they have major problems they can send them to us.”

There are also plans to train more local midwives and hire additional providers of basic medical care known as `tecnicas.’

Berman hopes to get CU School of Medicine faculty involved in community-based research projects like assessing the prevalence of asthma or parasites in villages.

The new medical facility will house adult and pediatric outpatient services, dental care and a birthing center. It will also contain a laboratory, conference area and living quarters for health care providers rotating through.

“This is a complicated project but we are ready to fully forge ahead,” Berman said.

A legacy of hope

On their last night in Colorado, the brothers were feted with cocktails and dinner at the Denver Country Club. A video about the Guatemala project, produced by a CU Denver media team and shown on Channel 9, was played for the nearly 70 guests.

At the end of the night, a smiling Fernando Bolaños rose to speak.

“Guatemala is a wonderful country but there are many problems. We have 47 percent of our people living in poverty. The government is practically non-existent in our area,” he said. “As a businessman you turn to the best place you can to get expertise and technology so we turned to a world class organization like the University of Colorado Denver.”

“I work on the farms and see poverty every day. It’s hard to change poverty. It will take time, but these last few days have left me very optimistic,” he said. “What is important in this life is what you leave behind. And I think we will leave behind a better place.”