The structure that has long been the centerpiece of the University of Colorado Anschutz Medical Campus — Building 500 — has been given a new name befitting its proud history and stature: the Fitzsimons Building.

The CU Board of Regents voted unanimously to rename the building that opened its doors in December 1941, four days before the attack on Pearl Harbor, and where thousands of soldiers were treated and Coloradans were born.

To commemorate the renaming, and to reflect on the CU Anschutz Medical Campus’s rich history, a celebration and sign unveiling took place Sept. 13 both inside and on the grounds of the stately art-deco building. The event was held 100 years after the opening of the first building on the army base that originally occupied the grounds.

About 50 people — including Regents, members of Colorado’s Congressional delegation, chancellors, the provost, deans, state legislators, Aurora council members and other dignitaries — attended the event. Remarks were delivered by CU President Bruce Benson; CU Anschutz Chancellor Don Elliman; Ben Stein, chief of staff for U.S. Rep. Mike Coffman (R-Colo.); and Sue Sharkey, chair of the Board of Regents. Paul Tauer, who was mayor of Aurora at the inception of the CU Anschutz Medical Campus, also attended.

Benson recounted the modest start of CU’s School of Medicine in Old Main on the Boulder campus in 1883. The school had two rooms, two professors, two instructors and two hastily recruited students. “Apparently there weren’t enough sick people in Boulder, so the operation moved to Denver in 1925, eventually taking up residence at 9th and Colorado,” he said. “Our health sciences operations relocated to the CU Anschutz Medical Campus in 2006, and has been growing tremendously ever since.” 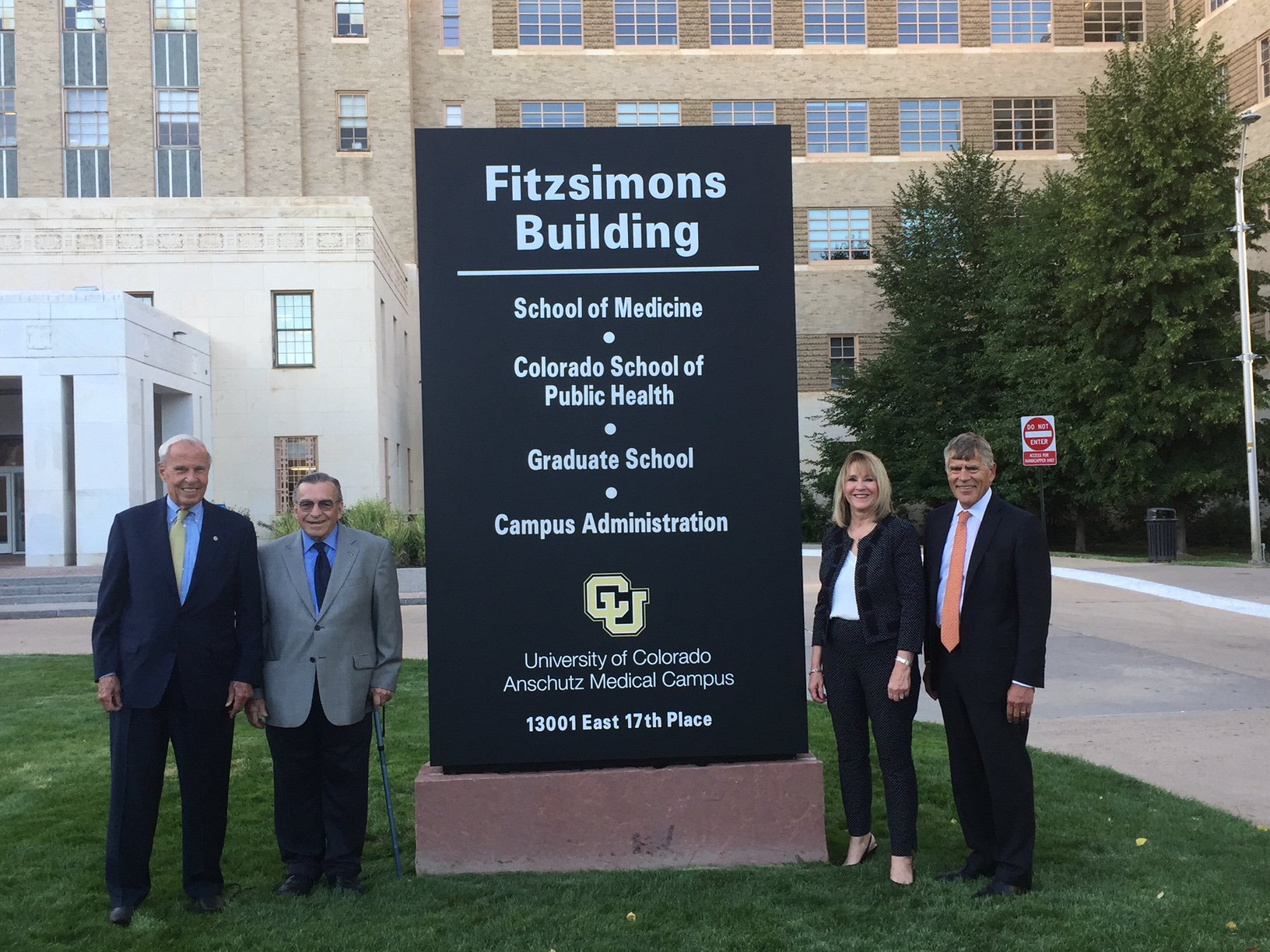 Benson noted that when the U.S. Army a century ago opened the hospital in Aurora — first christened Fitzsimons General Hospital — it began a proud history of treating injured men and women of the armed forces. He said the legacy of care of the nation’s veterans has transitioned into health care for people in Colorado and beyond. “That’s why it’s important to maintain the Fitzsimons name … and to continue the legacy of the U.S. Army Medical Corps,” Benson said. “We should all be proud that the Fitzsimons name will help this facility begin its second century, and we can be equally proud of the thousands of men and women who have continued to live up to the proud history of health care at this facility.”

The building initially received the name Fitzsimons in honor of Lt. William Thomas Fitzsimons, a civilian surgeon serving as a medical officer who was the first U.S. Army officer killed in World War I.

Benson said he was sorry for the absence of Aurora Mayor Steve Hogan, who passed away in May after battling cancer. “Steve was a friend for many years and did a great job as mayor and member of the Fitzsimons Redevelopment Authority Board.”

Tradition of caring for veterans

He noted that CU Anschutz continues its tradition of caring for our nation’s veterans, including:

Sharkey recounted her family's ties to the Fitzsimons General Hospital, which in December 1941 became known as Building 500, a reference to the structure's location 500 feet from the center of campus. She explained that in World War I the facility was first established to treat casualties of WWI, many of whom suffered from tuberculosis as well as chemical warfare. She pointed out that President Dwight D. Eisenhower suffered a heart attack in 1955 and spent nearly two months recuperating at Fitzsimons.

Sharkey said her brother, while a student at Colorado State University, suffered severe injuries in a car crash and spent five months recovering at the Fitzsimons Army Medical Center. She said her brother had hoped to serve in the military, just as her father had, but his injuries prevented him from realizing those dreams. “But he had the privilege and honor to meet these soldiers during the Vietnam conflict who had served and were recuperating,” she said.

Against the backdrop of this rich history, Sharkey said, the CU Anschutz Medical Campus is “leading us into a new era of health care, research and education. It is quickly becoming one of the leading academic medical centers in the country, and a top health care destination.

“We are fortunate to have this facility and the people who work on the leading edge of health care,” she added. “We’re also fortunate to inherit our tradition of excellent health care that has happened on this site now for a century. I trust we will do those who came before us proud.”