Speaking to a rapt audience of almost 5,000 in Denver, Matt Vogl covered more territory than what is usual in a brief TEDx talk. He went from an unflinching account of what led him to the brink of suicide 15 years ago to his desire to disrupt and innovate in the nation’s “snarled” mental health system to promising virtual-reality treatments for prisoners in Alaska and beyond.

Vogl, executive director of the National Mental Health Innovation Center (NMHIC) at the University of Colorado Anschutz Medical Campus, was among the featured speakers at TEDx Mile High “Reset” on Saturday at the Bellco Theater. Listed in the program as a “mental health technologist,” Vogl wowed the crowd, which frequently broke in with spirited applause and gave him a standing ovation after his 15-minute presentation. 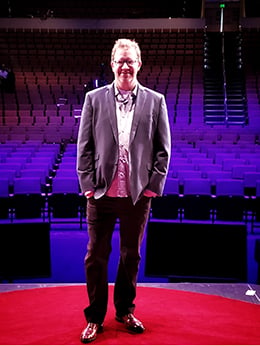 Matt Vogl, who once worked as a standup comedian, told the TEDx Mile High crowd, "The best part of the comedy life was it provided the perfect cover for my misery."

‘My rock bottom’
Vogl recounted the highs of his standup comedian career, saying, “Even when it sucked, the comedy life was amazing: I was getting paid to make people laugh. And best of all, it provided the perfect cover for my misery. … I was really funny, and I was really miserable.”

He recalled a night of smash shows at the Comedy Works in Denver, then going home and researching ways to kill himself. “Eventually, it got so bad that I wrote a note and picked a date. And then I bought a gun.” He said a neighbor randomly intervened and saved his life that day.

“It’s crazy how close I came, but what’s even crazier is that almost dying by suicide wasn’t my rock bottom,” he said. “My rock bottom came when I tried to access care in our snarled mental health system.” He illustrated the U.S.’s broken care system by showing a photo of highway gridlock. Access to care is abysmal, misdiagnoses are common and medications often make the patient feel worse. Vogl said he bottomed out when a therapist fell asleep in the middle of a session — and had the nerve to ask for a copay.

Currently in the United States, 80 percent of people with a mental illness don’t receive adequate care, Vogl said. But building more clinics and hiring more providers won’t solve the crisis, he said. “We cannot clinic our way out of our mental health access problem.”

His goal as co-founder of the NMHIC, established 2-1/2 years ago, is to test news ways to make mental health services of all kinds more accessible to everyone — when they need it and even before they need it. The center brings together behavioral health experts and community resources to produce new strategies that advance care in Colorado and across the nation.

Vogl, who has type 2 bipolar disorder, is fueled by a passion for mental behavioral services, and he’s increasingly intrigued by ways technology can be part of the solution.

An example is a collaboration the NMHIC has forged with prisons in the northernmost state — at the request of the Alaska Department of Corrections. The department was struggling with mental health issues among many inmates, often exacerbated by Alaska’s extremely long and dark winters. 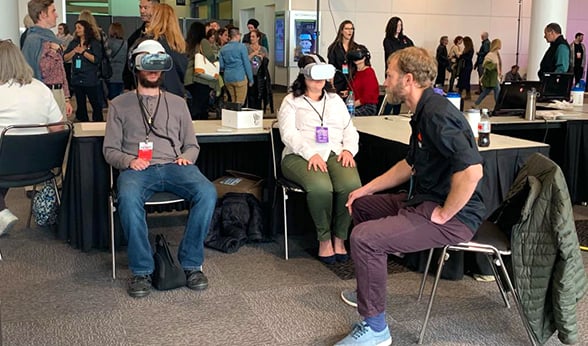 The National Mental Health Innovation Center's booth in the Bellco Theater lobby was popular with attendees who enjoyed demonstrations of the center's VR technology.

Vogl and a couple NMHIC colleagues introduced some of the inmates to VR technology. One inmate, behind bars for nearly 40 years, was transported to a sunny mountainside, leaving him in tears and saying, “I forgot what free felt like.”

The NMHIC launched a pilot program in three Alaska prisons to help inmates meditate. The plan is to integrate meaningful, personalized content for their virtual exposures. “A native inmate could meditate in the Inuit village where he grew up, or even participate in traditional ceremonies,” Vogl said. “We believe that over time this program can help us lower the use of sedating medications and solitary confinement.”

VR also shows promise in helping people overcome phobias, he said. For prisoners, this could help them transition to life on the outside — a prospect so frightening that it fuels a 70 percent recidivism rate.

VIRTUAL REALITY A HIT AT TEDx

The National Mental Health Innovation Center had a booth at the Bellco Theater lobby where the throngs of TEDx attendees could try virtual reality for themselves. More than 500 people participated in the demos, enjoying a relaxing tai chi experience, as well as being exposed to some of the meditation scenarios that are being piloted in Alaska prison

“We’re working with a New York-based startup firm to pilot test a series of VR experiences that enables inmates to learn critical skills to thrive on the outside. Things like resolving domestic conflict, or dealing with a job interview where the interviewer is grilling you about your time in prison,” he said. “Very often prisoners have some of the worst access to mental health services. So, if a solution works for them, there’s a good chance it will work for the rest of us — and it is.”

He showed a slide of his two sons, Mark and Sam, and said bipolar has a genetic component. He noted that people with untreated bipolar disorder have a 30 percent higher suicide rate than the general population, and “that scares me.” Prevention, early intervention and quick access to great care can lower those rates, Vogl said, motivating him to turn his fear into solutions.

“Technology isn’t the enemy of mental health. It’s a scalable solution,” he said. “I know because we’re seeing it work. In this life we can make life better — for me, for Mark and Sam, for inmates in Alaska and for everyone else caught in that bumper-to-bumper traffic.”