When 16-year-old Hari Sowrirajan says, “You can’t just buy nanoparticles at the supermarket,” you realize quickly that this down-to-earth high school student is doing some out-of-this-world science.

What you don’t know is that Sowrirajan has been working with researchers at the Skaggs School of Pharmacy and Pharmaceutical Sciences since he was a 13-year-old middle schooler—too young to step inside a CU Anschutz laboratory—all because he wrote a single email to a researcher he had never met.

How he got a foot in the door

Like many younger brothers, Sowrirajan was inspired by watching his older sister enter science fairs. By seventh grade, he decided to tackle his first project, manipulating carbon dioxide in water with cyanobacteria. Ready for new challenges in the eighth grade, he found an “intriguing” article about researchers introducing nanoparticles—particles between 1 and 100 nanometers in size—into water, focusing sunlight on the water and discovering that it boiled at a lower temperature.

“So much of our energy is generated by using fossil fuels to heat water,” Sowrirajan said. “If we could focus sunlight on nanoparticle-filled water, and the water produced steam at a lower temperature, the implications are profound.” 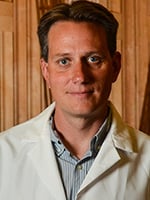 The eighth grader decided to spin his research off the article, trying to determine the optimal conditions for the process to work. Getting access to sunlight was not a problem, but the nanoparticles presented a far greater challenge. Undaunted, Sowrirajan did a Google search. The name Jared Brown, PhD, and the Nanotoxicology Laboratory popped up. With the help of his mother, Sowrirajan wrote an email to Brown.

“I have had young students in my lab before and it’s always fun,” said Brown. “Hari was the youngest, but his email was impressive because he already had a project outline, and so I wrote him back.”

“I was surprised and thrilled,” said Sowrirajan. “To this day, I don’t know why they responded and agreed to help.”

Conclusions from Hari's current science fair project, which looks at how nanoparticles influence the epithelium.

What he learned at CU Anschutz

After Brown gave Sowrirajan a green light, Jonathan Shannahan, PhD, research assistant instructor in the Nanotoxicology Laboratory, took over as chief mentor to the young student.  Shannahan acquired the nanoparticles and prepared the samples. “We handled them for him in a safe manner to mitigate any danger,” Shannahan said. “It was a very ambitious project but he had the desire to succeed.”

Too young to work inside the lab, Sowrirajan picked up the materials and received guidance at CU Anschutz, did the experiments at home and then returned to the pharmacy school to discuss experimental design, look at the data and assess results with Shannahan.

Sowrirajan described that experiment as “a lot of trial and error,” but his fascination with nanoparticles—which can be found in car tires, printer toner, lotion and drug delivery systems—kept him going. His science project placed first in the Environmental Science category in the Denver metro-area science fair; he went on to the state fair where he again placed first in his category.

A year later, in ninth grade, Sowrirajan advanced even further to the International Science Fair in Pittsburgh with a project looking at how nanoparticles influence cardiovascular disease development.

This year, Sowrirajan tackled an even tougher project, studying how nanoparticles influence the epithelium, the thin tissue lining the lung. With few resources to guide his work, he found himself venturing into the unknown and collecting massive amounts of data.

“I learned so much about the scientific process,” he said. “You aren’t going to always know what’s going to happen.”

“When he started, I was always looking over his shoulder, but now we have developed trust,” Shannahan added. “At the beginning, he just wanted to work with nanoparticles because they are cool. Now, he is a functioning scientist and a part of our lab family.” 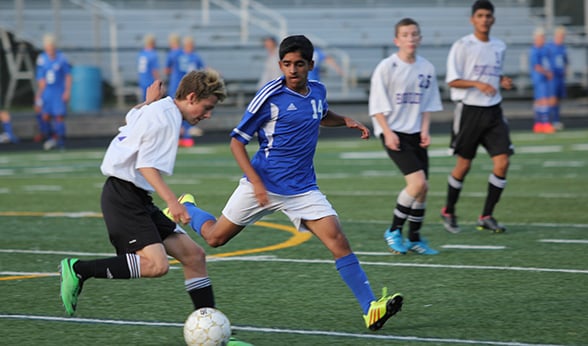 What he forgot to mention

Despite his scientific success at such a young age, Sowrirajan remains well-rounded. He is in the math club at Cherry Creek High School, where he also plays on the soccer team and runs track. He also plays the guitar and violin. Even with those accomplishments, he remains unassuming, so much so that during an interview he failed to mention one of his most significant accomplishments. Along with PhDs from CU Anschutz and Clemson University, he is listed as one of the authors on a scientific paper published by Brown’s lab, “Impact of silver and iron nanoparticle exposure on cholesterol uptake by macrophages.”

“Not too many high school students in the country have a published paper,” Brown said. “What he has accomplished is not unheard of, but he is unusual because he has done everything so well at such a young age.”

Sowrirajan also submitted an abstract of his work to the National Society of Toxicology for its annual meeting. He was accepted but he couldn’t go because of school commitments. Rather than drop him, the conference set him up on Skype, making him the first scientist in the history of the society to do a virtual presentation.

Sowrirajan has not yet decided what direction his career will take him after high school, but wherever he lands, he will bring with him years of professional research training thanks to Brown and Shannahan, and for that he is very grateful.

“When I was in elementary school, science was just glamorous explosions and test tubes filled with colorful solutions,” Sowrirajan said. “For better or for worse, I now know what it’s really like to work in a lab doing research that has the potential to impact millions of lives.”