On her bedroom wall, Jean Kutner, MD, MPH/MSPH, chief medical officer at the University of Colorado Hospital, associate dean for medical affairs and professor of medicine, has a framed sheet of first edition stamps featuring Elizabeth Blackwell, MD, one of the first female physicians and one of Kutner’s childhood heroes. “I remember writing book reports on her,” Kutner said. “Did I know that I was going to pursue a career having something to do with healthcare? Yeah, most likely. But this? This? Who knew?”

Kutner recently gave the keynote address, titled “Navigating Your Career”, at the inaugural Women in Leadership Power Breakfast to an audience of over 200 predominantly early career women at the CU Anschutz Medical Campus. A world-renowned expert in palliative care and geriatric medicine, Kutner said, “My entire research career has been devoted to improving quality of life for people with serious illness and their families.” Kutner joked about the job security: “Also, there will never be a shortage of older people.”

Recognize the difference between a crafted narrative and reality

“I could tell you a backward story how everything in my life pointed me to where I’m at now, and that’s absolutely the story I tell when I’m applying for a job. But reality is much messier,” Kutner began. After a bachelor’s degree from Stanford followed by medical school and an internal medicine residency at the University of California San Francisco, followed by primary care research fellowship and geriatric fellowship at the University of Colorado, Kutner joined the faculty in the CU School of Medicine in 1997. 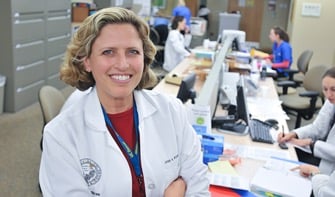 Jean Kutner, chief medical officer at the University of Colorado Hospital, gave the keynote address of the inaugural Women in Leadership event.

At the beginning of her career, Kutner envisioned a traditional research path, with 20 percent clinical and 90 percent research effort as a palliative care investigator. Kutner’s journey first veered in the direction of leadership in 2002 after being recruited to acting division head of General Internal Medicine, followed by a permanent position in that role in 2005. She said, “I stepped into a division head position as a brand-new associate professor. Was that the right time to make that move? Did I know where that highway was going? No, but here we are.”

In 2014, Kutner chose to embark on a new challenge: the University of Colorado Hospital was seeking its first-ever chief medical officer. Though it was unfamiliar territory, Kutner said, “Sometimes you take a leap of faith and say yes, even though you’re not sure what you’re leaping into.” She continued, “But it helped to ask myself, what gets me out of bed in the morning?” Kutner saw the CMO role as a way to help effect change and influence patient care, while continuing her passion for mentoring the next wave of palliative care researchers in her academic role.

For those embarking on their own career journey, Kutner said, “It’s OK not to know where you are going, but it’s important to know who you are and what your passions and strengths are.” She added, “Listen to your heart. Pay attention when it doesn’t feel right. If you come home and say that was a really good day, ask yourself what happened that made it so good.”

Cultivate mentors and sponsors (and know the difference!)

Kutner credited her many mentors with her passion for research but was careful to point out that mentorship is only half of the equation. “Mentorship provided me with support and guidance for my career, but sponsorship provided opportunities — actually putting me in a room where I could demonstrate my leadership and gain more experience,” Kutner said. Relative to finding strong mentors in a new environment, Kutner referenced the children’s book, “Are You My Mother?” “Start talking to people, tell them your interests, see if there is a resonance there. Ask who else you should be meeting with,” she advised.

Kutner advocated for a practice she calls career walkabouts, where she seeks out senior faculty to ask, “What advice do you have looking back? Tell me about decisions you made in your career.” She continued, “When you go talk to people about their lives, and you’re not asking for resources, or space, or parking, or a raise, people are really generous with their time. It was helpful to understand how they made decisions along the way.”

The Women in Leadership series grew out of a final project developed by Jan Gascoigne, PhD, assistant vice chancellor of Student Services, and Karen Aarestad, assistant vice chancellor of Advancement, during a fellowship in the Academic Management Institute for Women Leaders in Higher Education. They planned the series along with Janet Corral, PhD, associate professor of educational informatics in the CU School of Medicine, and received funding support from the CU Anschutz Staff Council, CU Anschutz Student Affairs and CU Anschutz Human Resources.

Asked by an attendee about work-life balance, Kutner replied that the language around the conversation is wrong. “It’s life. It’s all life. Work is part of it. Family is part of it.” She added that it’s up to us to define the umbrella of life, and it’s different for everyone. “Just because I’m sending emails at 11:30 at night doesn’t mean I expect you to respond at 11:30,” she clarified.

How does Kutner find enough hours in the day? “Give yourself permission that the list is not done. Set rules and be explicit when you need to work and when you need to be present at home — don’t pretend that you can do both,” she said. She recommended taking regular breaks, such as exercise or meditation, to reflect on your passions and integrity. Kutner herself goes backpacking every year for the last two weeks of August. “Even my patients know I’m unavailable at that time.”

When the unique pressures of academia accumulate, Kutner said, “One thing that we can do for each other is to talk about the rejections. I remember when my first fellowship paper was rejected, and I was devastated. Now if a paper gets rejected, it’s a bummer to revise it but I know I’ll just send it somewhere else.” She added, “As academics, no one told us that we are embarking on a life of failure. And we need to talk about that.”

The art of graceful self-promotion

“As women, we tend to think that people will automatically recognize our amazing achievements and give us promotions accordingly,” Kutner said. “It’s not our nature to self-promote; it’s a learned skill.” Hence, she advised the audience to get comfortable telling their professional network about achievements, such as papers published or awards received. “People can’t advocate for you if they don’t know what you’ve done.”

Four and a half years into the CMO position, when she asks herself how things are going, Kutner laughingly referenced the Talking Heads song “Once in a Lifetime”:

Kutner said, “I’m currently in my fourth year as CMO, and not a week goes by where I don’t say, oh my God, can I do this job? But I’m doing it. Every day, I’m doing it.” She added that she continues to learn something new every day. “How cool is that?”

The Women in Leadership Power Breakfast is a quarterly offering from the CU Anschutz Medical Campus. The next event, featuring CU School of Dental Medicine Dean Denise Kassebaum, will take place on April 16.