A mysterious epidemic of chronic kidney disease among agricultural workers and manual laborers may be caused by a combination of increasingly hot temperatures, toxins and infections, according to researchers at the University of Colorado Anschutz Medical Campus.

The study was published today in the New England Journal of Medicine. Click here to read the paper.

In recent years, chronic kidney disease has emerged as a major illness among workers in hot climates. It was first identified in the 1990s by clinicians treating sugar cane workers in Central America. In 2012, it claimed roughly 20,000 lives and has now been identified in California, Florida and in Colorado’s San Luis Valley.

But the exact cause has been hard to determine.

“We looked at all the available literature on the subject and asked, `What do we know today? Where are the gaps?” said the study’s lead author Lee Newman, MD, MA, director of the Center for Health, Work & Environment  and professor in the  Dept. of Environmental & Occupational Health at the Colorado School of Public Health. “We were hoping to synthesize everything we know so far for a framework for moving forward.”

The disease is more prevalent in sugar cane workers and other agricultural employees including cotton and corn workers, shrimp farmers and miners. It is less common at higher elevations.

Newman and study co-author Richard Johnson, MD, of the University of Colorado School of Medicine, said the disease could be caused by heat, a direct health impact of climate change, as well as pesticides like glyphosate.

“Some pesticides are nephrotoxic, and these could possibly contaminate the water supply,” Johnson said. “Indeed, there are studies showing the epidemic in Sri Lanka is greatest in areas where there are shallow wells in which toxins might become concentrated.”

Sri Lankan farmers exposed to glyphosate showed an increased risk for chronic kidney disease. Still, the levels in wells were very low and studies in Central America turned up little glyphosate. Along with pesticides, the researchers looked at heavy metals as a possible culprit. Lead and cadmium, known to cause kidney injury, have been reported in the soils of Sri Lanka and Central America.

Other potential causes include infectious diseases that can hurt the kidneys such as the hanta virus and leptospirosis, common in sugar cane workers. Genetic factors are also a possibility.

Heat stress and persistent dehydration can cause kidney damage.

The disease is moving into the U.S. with agricultural workers in Florida, California’s Central Valley and Colorado’s San Luis Valley reporting incidences of the illness.

“This is not the usual kidney disease we see in the U.S.,” Newman said. “It is not caused by high blood pressure or diabetes. The usual suspects are not the cause.” 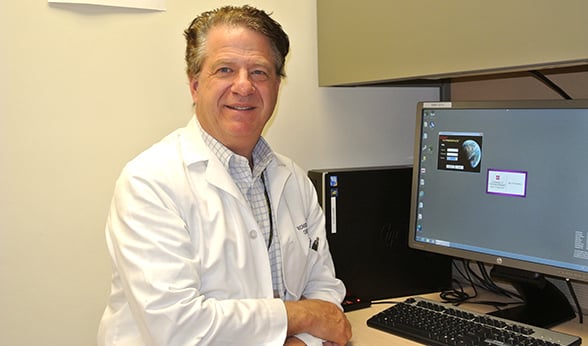 Johnson pointed out that CU Anschutz has two major efforts underway that are investigating worker health and the impact of climate change on disease.

“This disease is not confined to the southern hemisphere, it is coming here and in fact it is already here,” Johnson said. “It is my opinion that climate change plays a role in this epidemic.”

Those impacted are mostly agricultural workers, the people who grow and harvest the world’s food.

“They are the people who feed the planet,” Johnson said. “If climate change continues like this who is going to feed us?”

Newman and Johnson believe the epidemic is caused by a combination of heat and some kind of toxin and they recognize the need to take preventative action immediately.  That means ensuring workers get adequate breaks, drink enough fluids and spend time in the shade. It also means maintaining a clean water supply, free of chemicals toxic to the kidneys.

“When clinicians detect clusters of patients with chronic kidney disease who work for the same employer or in similar jobs,” the authors said, “they should contact occupational health and safety and public health professionals to promote investigations of workplace conditions.”