The University of Colorado School of Medicine’s Department of Emergency Medicine is a leader in studying the effects of climate change on human health, and Cecilia Sorensen, MD, has put the mileage on her shoes to prove it.

In the past year, she’s surveyed neighborhoods in Puerto Rico to study the aftermath of Hurricane Maria; made daily treks to the Syria-Lebanon border to examine the role of environmental change on women’s health; walked through sugar cane fields in Central America where heat stress may be a culprit behind workers’ increasing rates of kidney disease; and attended numerous conferences and board meetings across the nation. 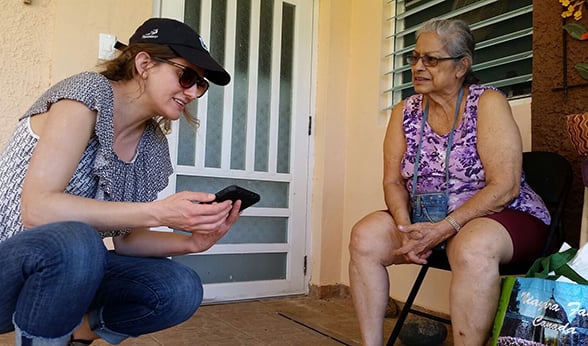 “The work is so incredible,” she said. “There is so much opportunity for physicians to be involved in this topic.”

The first of its kind in the nation, the fellowship was spearheaded by Jay Lemery, MD, associate professor of emergency medicine and co-author of “Enviromedics: The Impact of Climate Change on Human Health.” The program, which welcomes its second fellow this summer, received funding from the Denver-based Living Closer Foundation.

“We’re getting indications that other major universities are super-excited about what we’ve done here,” Lemery said. “Going forward, we’re looking at doing the fellowship as a consortium. We could potentially send our fellow to Harvard to work on public health and human rights projects and vice versa. That would be the goal – to start to pool and share resources.”

Lemery said the threat to human health from climate change — natural disasters such as heat waves, wildfire, hurricanes and rising oceans as well as increases in vector-borne disease and air-quality degradation — is clearly borne out by science. However, physicians have been largely absent from the dialogue, and consequently, from the policy decisions that drive meaningful change. 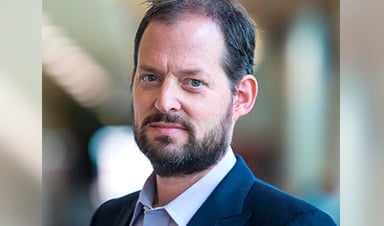 Healthcare providers, as the professionals dealing with illness and injury on the front lines, are uniquely positioned to say, “this is a significant problem; something must be done,” Lemery said.

“Climate change is a force multiplier – it will worsen health in many different ways and we have a chance to mitigate it. It’s not too late; we’re not doomed,” he said. “Just like we tell our patients: ‘Stop smoking now, while you’re in their 20s, because I can tell you what this looks like in your 60s.’ Climate change is the same thing.”

Lemery said the aftermath of Hurricane Maria, a category 5 hurricane that slammed Puerto Rico in September 2017, illustrates the need to study correlations between climate change and health. The death toll was initially reported as 64 by local authorities, but subsequent studies, including the one Sorensen took part in, revealed the statistical mean mortality from the storm to be approximately 4,600.

“If you can’t explain the damage of extreme weather on a vulnerable population, how are you going to understand the true impact of these threats?” Lemery said. “Like any science, you need data. Data fuels decisions and policy makers.”

In the past year, Sorensen has been on the forefront of offering – from a physicians’ viewpoint — hard science to the policy makers. Sorensen and Lemery were among the authors of the latest National Climate Assessment, which summarizes the impacts of climate change on the United States, both currently and into the future.

The CU fellowship has given Sorensen, who chairs the Education Committee for the Medical Climate Society for Climate Health, a seat at the table at some of the most important discussions taking place on the topic.

“As physicians, we bring a unique perspective because we take care of patients on the front line. We understand human physiology,” she said. “Public health experts understand the epidemiology and the statistics around disease, while we’re the experts on human health.

“So, when all these people team up, you gain an incredible perspective,” Sorensen added. “I think physicians are so vital to solving these problems.”

Sorensen received her bachelor’s degree in environmental ecology from CU Boulder. She went on earn a doctor of medicine degree, leading to meeting Lemery during her residency in emergency medicine at Denver Health. They shared a strong interest in the intersection of environment and health, and a “light bulb went off.” To Sorensen it was obvious: the health of the environment is essential to all organisms on the planet which rely upon it.

In another project, Sorensen and researcher James Crooks at National Jewish Hospital are examining how wildfire and smoke exposure correlate with patients requiring ICU care. Because ICU beds are limited, predictive analytics would help hospitals adjust resources accordingly to meet higher demands. “We have the potential to predict a couple days out in places near wildfires that will see surges of people needing ICU care,” she said.

She hopes to continue working as a practicing physician, while also actively studying the interplay of climate and human health. In the near future, Sorensen predicts, climate medicine will become a popular sub-specialty in schools of medicine. 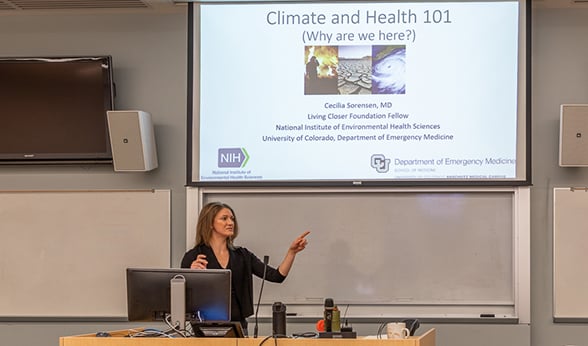 Cecilia Sorensen, MD, delivers introductory remarks about the new Climate and Health class, offered by the CU School of Medicine.

“You’d be amazed how many emails Jay and I get from interested students all around the country every week,” she said. “I’m currently working with a student at Johns Hopkins University who has come to us at the University of Colorado because we’re the people doing this. We need to keep creating opportunities to involve students in whatever we’re doing.”

Just this month, the Department of Emergency Medicine in the CU School of Medicine launched a new elective for fourth-year medical students – Climate Change & Human Health. The two-week course has about 20 students, several of whom are coming from out of state. The class is being collaboratively taught by over 15 faculty members from CU Anschutz and CU Boulder.

“There is so much interest in this topic from this next generation of physicians,” Sorensen said. “People are wanting to come here to figure out what we’re doing, because it’s very unique. For fourth-year medical students, there just aren’t opportunities to study climate change and medicine.”

Added Lemery, “In terms of education on climate and health, we’re it. There’s so much work to be done.”