Home / News / Colcord does it all as Nucla pharmacist

NUCLA, Colo. — After giving a middle-aged woman a flu shot, Don Colcord asks, “Do you want a Band-Aid or a kiss?” The woman chuckles and says with a sly smile, “Well, I guess it depends on where you give me a kiss.”

That’s how it goes here at The Apothecary Shoppe where Colcord flirts, fills prescriptions and inoculates the locals — not necessarily in that order. The easy-going druggist runs the only pharmacy for 4,000 square miles and is something of a Main Street institution in this remote hamlet on the Western Slope.

Don Colcord gives a flu shot to a customer at his Nucla pharmacy. Photos by Chris Casey.

Known simply as Dr. Don, Colcord is a 1974 graduate of the CU School of Pharmacy (now known as the CU Skaggs School of Pharmacy and Pharmaceutical Sciences), who came here and never looked back. Along the way, he’s gained a bit of fame, first as the subject of a wildly popular New Yorker profile and now as the focus of a new TV show based on his life as the nucleus of Nucla.

"It’s a close-knit community, and Don really cares,” says resident Annie Viehman. She sits in a rocking chair near the soda fountain, waiting on a prescription. “Everybody comes in The Apothecary and has a chit-chat. It’s just a different feeling you get in here. Much different than a chain store.”

'Nobody can replace him' 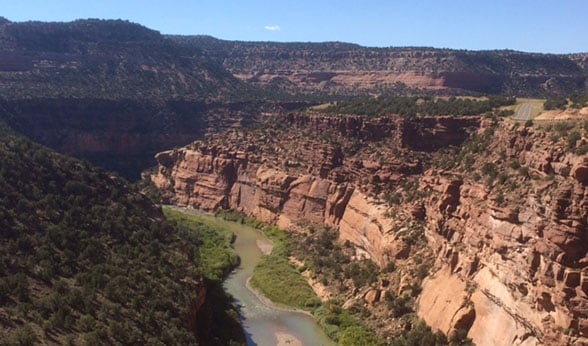 Colcord, who grew up in the now ghost town of nearby Uravan, always wanted to be a pharmacist. After school, he’d stop by the drugstore where his mom worked. “I’d sit on the floor and read comic books. The pharmacist chased me out a couple times, but he got to be friends with me and showed me around the store," he says. "I just fell in love with it. I wanted to be a druggist from the time I was eight and never changed my mind.”

Colcord enjoyed studying at CU, recalling his involvement in the pharmacy fraternity Phi Delta Chi, his fondness of the Anatomy and Physiology course — “That class was tremendous in teaching you the day-to-day stuff of what certain drugs do and how they do it” — and his enthusiasm for visiting local grade schools to talk about the dangers of drug abuse. For the latter volunteer work, Colcord received the Upjohn Award for Community Service from the CU School of Pharmacy.

Colcord has provided health care for more than three decades — weathering the changes in pharmacy, in retail, in rural America — and now is pondering retirement. It’s a topic of considerable angst for both Colcord and the 1,400 residents of Nucla and Naturita — two dots on the map bisected by the San Miguel River as it flows through red sandstone canyons, past shuttered uranium mines.

"People say, 'What are we going to do without Don?' says resident Joe Rice. "The fact is nobody can replace him."

Dr. Don loves his work, his wife (he married his high school sweetheart), baseball, marksmanship and hunting. His passion for his community is as expansive as the mountains-meet-desert plateau where Nucla sits. The small town’s requirement that residents own guns and its annual prairie dog hunt (since cancelled due to protests), have occasionally thrust it into the national spotlight.

When he’s not working, Colcord is likely announcing youth football games, emceeing a town parade, handling pyrotechnics at the annual Fourth of July display, or performing the lead role in the local theater production. Yet at heart, he’s a caregiver. Colcord cares for his wife, Kretha, who is severely disabled by spina bifida, and he goes all-in on the small stuff, too. Hardly a day passes when he doesn't fix somebody's glasses or watch.

"I doubt any pharmacist in a big city would ever understand how hard it is to feel like you're such an integral part of your community," says Colcord, who also makes house calls to steri-strip wounds or remove stitches. "Here, you're a pharmacist, doctor, counselor, watch repairman and volunteer."

Bob Governski, behind counter at left, a 1994 graduate of the CU School of Pharmacy, helps at Don Colcord's Apothecary Shoppe a few days a month.

Days off are rare. Bob Governski (CU School of Pharmacy, Class of 1994) is a pharmacist from Telluride. He’s done relief shifts at The Apothecary a few days a month for 10 years. "It's pretty high-paced here," he says. "Sometimes it's hectic."

'Pay what you can' 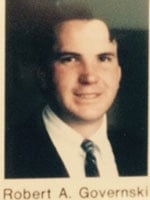 Bob Governski, who helps out at Don Colcord's pharmacy a few days a month, graduated from the CU School of Pharmacy in 1994. 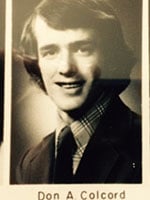 Colcord graduated from the CU School of Pharmacy back when pharmacists typically went to work for small-town or independent drugstores. He spent a year at St. Joseph's Hospital in Denver and another year learning the retail trade at a discount store in Grand Junction.

Colcord's business approach has always been rooted in that 1950s drugstore in Uravan, where he read comics and listened to the pharmacist dispense equal measures of drugs and counsel.

Even the name of his drugstore, The Apothecary Shoppe, harkens to days of yore. You won't find Colcord tapping out emails or posting status updates on Facebook. He prefers face-to-face communication. He eschews the mail-order medication trend, saying you can't expect octogenarians to remember to re-order their drugs.

If there's adversity in a customer's life — a death in the family, a divorce — Colcord knows about it and tailors his interaction accordingly. "It gives you a distinct advantage of knowing what's appropriate to say to someone on that day." In general, he says, "I'm constantly out flirting with all the ladies and giving them hugs, and just spending a lot more time on the floor than you would in a big town."

When the topic swings from light to serious — such as a patient who is short on cash — Colcord does the unexpected in our impersonal digital age: He says, "Pay what you can." The board above his counter is littered with tags from folks who weren't able to pay the full amount. "Most of the people here live on less than $20,000 a year," the druggist says. "Everything seems to be going up so high lately … and a lot of people simply can't afford their prescriptions anymore."

He figures he has about $160,000 in accounts receivable that will likely go unpaid. Some patients forgo money and pay Colcord with a boat here, a motorized wheelchair there. 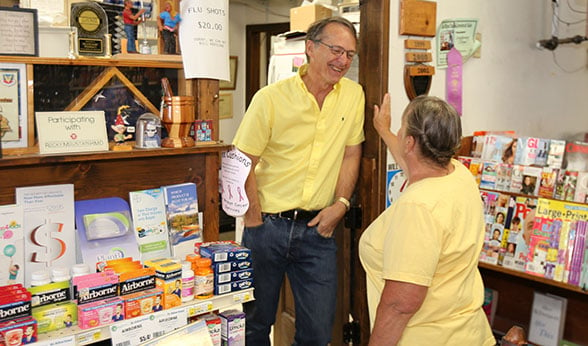 Don Colcord chats with longtime friend and customer Susan Rice at his pharmacy.

'I survived and everybody else didn't'

Hard times hit Nucla-Naturita when the U.S. nuclear power industry tanked after the Three Mile Island accident in Pennsylvania in 1979, and it's never recovered. It was at that time that Colcord was setting up his own drugstore in Nucla.

"I was worried, but blessed because I’d worked in a discount store," he says. "I was able to selectively price certain items. It made a big difference. I survived and everybody else (three other local pharmacies) didn’t."

Eleven years ago, Colcord launched a compounding service that, as he faced more economic headwinds, gave his store a much-needed revenue stream. On this Friday morning, he’s mixing a pain-deadening suppository that will hopefully bring relief to a Telluride man suffering from radiation treatment to his colon. "We've sent compounds to four countries and every state in the West," he said.

New Yorker and a TV pilot

In 2011, Colcord's medical acumen and profound ties to Nucla-Naturita so captivated journalist Peter Hessler that he spent several months observing the druggist and interviewing townsfolk about him and the community. Hessler's New Yorker profile — "Dr. Don: The life of a small-town druggist" — won multiple awards and spawned a short documentary. 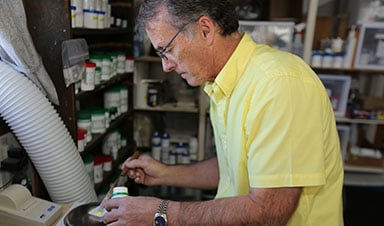 Don Colcord measures a drug for a compound medication.

More recently, two accomplished Hollywood producers, with credits including the film "Sex, Lies and Videotape" and the TV series "House," bought the rights to the New Yorker story and shot a pilot episode for "Dr. Del," which they plan to make a TV series. The story is based on Colcord but fictionalized with different names for local residents and towns (Nucla is called Isotope).

Colcord remains baffled about why Hessler made him the focus of The New Yorker piece, but he's grateful for the exposure that both the story and the TV pilot bring to rural druggists. "I pray the TV show does get picked up by a network, because I think it would be so cool for people to see all the different stuff that rural pharmacists do in small towns."

Just as the pilot depicts, townsfolk come to him — day or night — to get answers to health questions. Sometimes it's an emergency, and they'd much rather go to Dr. Don than shell out thousands of dollars for an ambulance ride to the nearest ER.

One summer evening in 2010, a van came down Colcord's driveway and a family of six stepped out. The parents were Mexican migrant workers desperate to know what ailed their 4-year-old boy. They'd taken him to a couple area clinics where the diagnosis was flu. Colcord looked at the boy's swollen and burning-hot belly and thought it was a ruptured appendix or a blocked bowel. Knowing some Spanish, he told the parents that the boy needed to get to an emergency room that night or he might not make it.

"They drove him to Grand Junction and within an hour the boy was being flown to Children's Hospital Colorado in Aurora because he had brucellosis — a rare milk-borne illness," Colcord says. Without treatment, the boy would have died in a few hours. The family later visited and "the little boy gave me a big hug,” Colcord said. “It was really nice. The parents cried because they understood how sick he was." 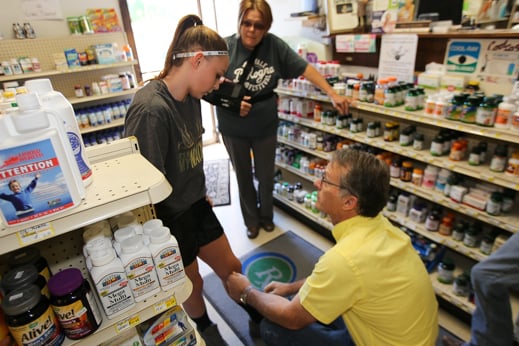 Colcord checks the injured knee of a girl who plays on the Nucla High School volleyball team.

This story made it into the TV pilot, albeit ginned up with Dr. Del administering an IV and summoning the sheriff to fly the boy to Denver. "It's extremely well-done and very well-acted with some very big-name actors in it," Colcord said of the production, which includes Chloe Sevigny as a fetching bartender in the local saloon. "It makes pharmacists look very smart and very caring."

A number of worries

Besides his wife's health, Colcord’s main concerns these days revolve around numbers. 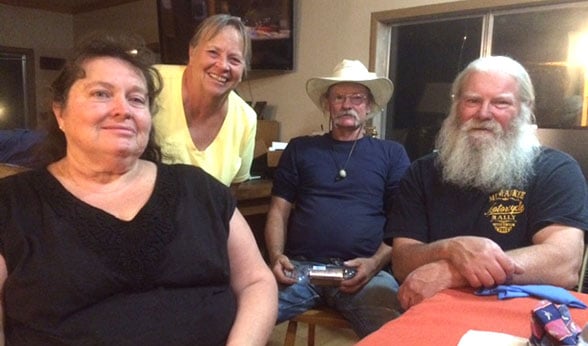 Longtime Nucla residents enjoy the service provided by Don Colcord, CU alumnus. At far right is Joe Rice, who says, "Don has got all the answers" to health care concerns.

Joe Rice grew up with Colcord. He will tell you that Dr. Don is one of the smartest, most vibrant people in town.

"He always tells you he's not a doctor, but he's got all the answers," Rice said. "For health issues, I go to Don and the VA (clinic) — that’s it. He's someone you can trust. There is no other Don out there that would care about our community like he does."

Colcord worries that if he doesn't retire soon — he yearns to travel — he'll wind up dropping dead in his drugstore.

At the same time, he worries what will become of the town if he does retire. "I'm so worried I'm going to hurt this community," he said. "I'm hoping we can come up with a system that will take advantage of what our clinics can offer to try to get a PharmD graduate in here. I’d really like to see a young person come here who has a little more energy."

A little more "go," as the mild-mannered druggist puts it. However, on the brink of 65, it's clear Dr. Don doesn't have any gear besides full-throttle.