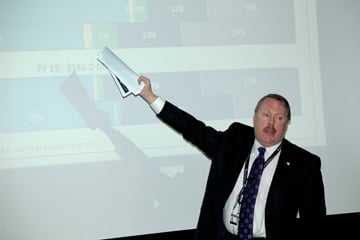 Budget and finance officials painted a sobering picture of the funding challenges facing the University of Colorado and higher education in the state during a lunch-and-learn program at the Anschutz Medical Campus.

The CU Advocates program is a way to arm faculty, staff, students and alumni with information on how to be better advocates for the university. To sign up for CU Advocates click here.

Parker and Barsch opened the session with positive news, highlighting CU's economic impact ($5.3 billion to Colorado's economy in 2011) and outstanding academic achievements (five Nobel Laureates and eight MacArthur Genius Fellows). University of Colorado Hospital has ranked as the No. 1 academic hospital in the nation two years running -- a feat no other hospital has achieved. Also, more than 170 of 300 physicians named in the 2012 survey of "Top Docs" in 5280 Magazine are CU faculty or clinical volunteers.

See the slideshow of their full presentation here.

The $2.6 billion in payroll and operating expenditures of CU Anschutz and affiliated hospitals is comparable to the state's ski industry. "When you think about what's happening on this one square mile in Aurora as being comparable to the economic impact of the Colorado ski industry, that's pretty important," Parker said.

But the finance picture dims considerably when it comes to state support of higher education. "Colorado ranks 48th in the nation of state funding per full-time student," Barsch said. "That's really not surprising -- we're about 48th in the country in just about everything that's state-provided. We have a very low tax base."

Because mandated expenditures such as K-12 education and health obligations, such as Medicaid, consume most of the state general fund, "higher education is one of the areas most affected" when state revenues shrink, as they have in recent years, Barsch said. Even as the revenue outlook improves, which is currently the case, the picture for higher-ed funding in Colorado "isn't that rosy going forward," he added.

The change in state support per resident student hit students in the CU System hardest between FY 2001 and FY 2013. In that decade, their reductions in state support ranged from 35 percent at CU-Boulder to 49 percent at CU Denver. Research institutions bore the brunt in the reductions, they said, because legislators look at the ability of campuses to rely on other revenue streams, such as research grants. Often overlooked is the fact that those grants and other donations are tied to specific research programs and not available to the discretionary fund.

CU has coped with the reductions by becoming even more efficient -- the university's administrative expenses rate well below peer institutions -- and increasing the share of each campus's budget made up by tuition and fees.

Parker said the Anschutz Medical Campus has the least flexibility in regard to tuition because of health care programs with capped enrollments, facility restrictions and other stipulations. "For this campus, you have kind of the perfect storm. You have the state cutting our general funds and we have no way of dramatically increasing our tuition," he said. Plus, changes in federal funding -- such as the current sequestration, which impacts research funding -- and health care reform, which impacts clinical funding, equate to even fewer dollars available in the future.

One slide showed CU's School of Medicine ranking second-to-last out of 39 public schools of medicine in amount of state support per student. "This is a very compelling chart," Parker said, "but like I said, (charts showing CU programs) in pharmacy, nursing, dental medicine look just the same."

Meanwhile, the Anschutz Medical Campus provides the bulk of Colorado's health care workforce, which is predicted to grow in need dramatically during the next 10 years. The Colorado Health Institute estimates a shortage by 2025 of 1,000 primary care physicians and 14,000 nurses.

Funding strategies to generate new revenue sources for the Anschutz Medical Campus include possible tax and fee initiatives, the growth of the branch medical campus in Colorado Springs and opportunities through clinical affiliates. Other opportunities include more private research, industry clinical trials and ramped-up tech transfers.

Barsch summed up by saying that CU has an "outsize impact on the state" producing the lionshare of the state's undergraduate and graduate degrees "in areas critical to economic activity, growth and prosperity.