Colorado is a world leader in studying Down syndrome — with the University of Colorado Anschutz Medical Campus at the epicenter — and the galvanized research is spurring discoveries about Alzheimer’s disease, leukemia and autoimmune disorders that affect the broader population.

More than 150 people attended the annual World Down Syndrome Day celebration at the Colorado State Capitol on March 21, including Gov. Jared Polis and Lt. Gov. Dianne Primavera. The speakers, including Joaquin Espinosa, PhD, executive director of the Linda Crnic Institute for Down Syndrome, highlighted gains made in extending and improving the lives of people with Down syndrome.

Colorado is the national and global leader in Down syndrome research, thanks to the cooperative effort of the Global Down Syndrome Foundation (based in Cherry Creek), the Crnic Institute, the Rocky Mountain Alzheimer’s Disease Center, the Anna and John J. Sie Center for Down Syndrome at Children’s Hospital Colorado — all based within the CU School of Medicine —  and the recently opened Adult Clinic for Down Syndrome at Denver Health.

“It’s just incredible to have collaboration with these many affiliates in one state all working together, and working very closely,” said Patricia Winders, PT, senior physical therapist at the Sie Center for Down Syndrome. “It’s what brought me here in 2007. This has really been built by Michelle (Sie Whitten, president and CEO of the Global Down Syndrome Foundation), Tom (Whitten) and by Anna and John Sie since before 2007. We’re very fortunate to have this here.”

Megan Bomgaars, who gained fame in the A&E TV show "Born This Way" and is now a successful entrepreneur, speaks about living without limits at World Down Syndrome Day.

The Sie Center, established in 2010, currently serves more than 1,500 unique patients from 27 states and 10 countries.

The incidence of people with Down syndrome is increasing, with live births now at one in 691 compared to one in 1,000 in 2002. Their lifespan has more than doubled to 60 years, from 28 years in the 1980s. People with Down syndrome are highly predisposed to certain diseases — including Alzheimer’s and autoimmune disorders — and protected from other diseases, including solid-tumor cancers and heart attacks, which combined account for 60 percent of the deaths in the United States. 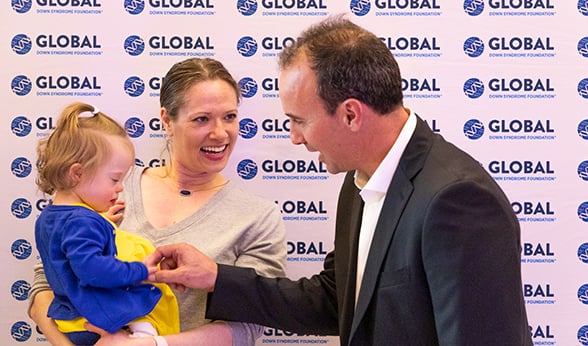 The event celebrated how people with the condition are important members of society — holding jobs, getting married, going to college.

Joaquin Espinosa, PhD, executive director of the Linda Crnic Institute for Down Syndrome, greets a family at the World Down Syndrome Day celebration at the State Capitol.

Megan Bomgaars, who gained fame on the A&E TV show “Born This Way” and is now a successful entrepreneur, spoke about living a no-holds-barred life with Down syndrome. “We are powerful people in the world. We are passionate. Let your life motto be, ‘Don’t limit me.’’’

Martha Keele, senior director of events and government affairs for the Global Down Syndrome Foundation, said Down syndrome has, since 2001, been one of the least-funded genetic conditions by the National Institutes for Health, but that is changing thanks to the work of the foundation and efforts by the multi-pronged team in Colorado. She noted that the Crnic Institute is up to over 200 scientists doing research that will lead to personalized treatments and ever-improved quality of life for people with Down syndrome.

Espinosa said the mission of the Crnic Institute is to improve the lives of all people with Down syndrome and advance biomedical research. The institute takes an integrated approach — from basic science all the way through to the testing of new diagnostics and therapeutic strategies in clinical trials.

“People with Down syndrome are truly a gift for science,” he said. “By studying them not only are we going to help them, but also help all humankind by understanding how the extra chromosome acts on these other medical conditions.”

The date, March 21, signifies the fact that people with Down syndrome are born with three copies of chromosome 21 instead of the typical two.