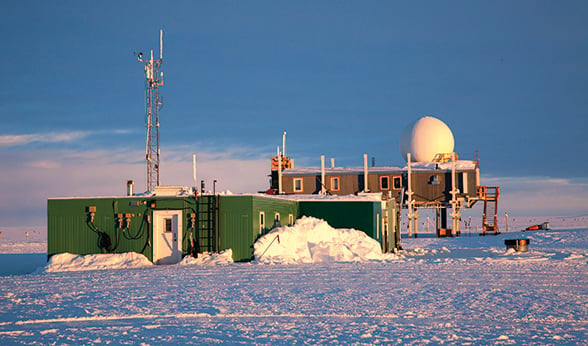 The Wilderness and Environmental Medicine Section (WEM) in the CU School of Medicine’s Department of Emergency Medicine is taking its expertise in wilderness and austere medical care to one of the most extreme and remote places on Earth.

In February, WEM won a subcontract grant from the U.S. National Science Foundation to provide field health care services at Summit Station in Greenland. Summit Station is a global research facility perched at 10,500 feet atop the Greenland ice sheet.

“It’s basically the art and science of taking care of people in remote and extreme environments,” he said. “It forces us to think in very creative ways. How do we take 21st century medicine and apply what we know to these places where you don’t have the technological tools to do what we do on the CU Anschutz Medical Campus?” 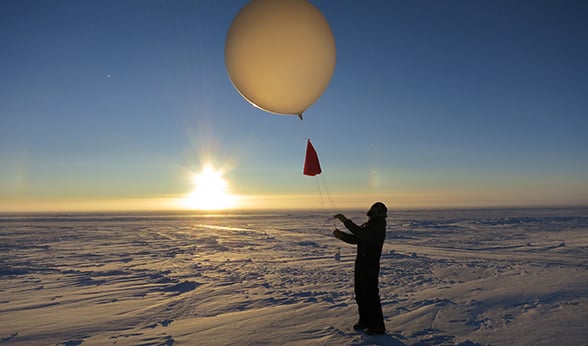 A researcher releases a weather balloon at Summit Station. Photo by Kevin Hammonds.

WEM honed its expertise in remote medical services by holding the EMS medical directorship for the U.S. Antarctic Program for two years. In Greenland, the CU WEM bid was selected over various applicants, including private industry, for the subcontract, which lasts for a year with an option for renewal. Support at Summit Station is provided by CH2M HILL Polar Services, under contract to NSF.

In Greenland, WEM will be in charge of four phases of service:

Lemery said people are more frequently venturing to extreme places across the globe, and the expertise of WEM faculty – in altitude sickness, frostbite, hypothermia, trauma treatment and other wilderness care – uniquely positions WEM to serve these travelers, as well as advance remote-setting health care.

“We have that niche in the health-care world,” Lemery said. “Greenland is a robust place to test best practices in medicine – to see what works, what doesn’t work. We’re also training people to be outstanding clinicians anywhere in the world. Most of the planet doesn’t have the medical tools like we have at CU Anschutz. These are important lessons to bring home to our students and residents.”

David Twillman, RN, University of Colorado Hospital, will staff Summit Station during the high season of roughly April to August. During the winter months, WEM will provide medical services via telemedicine.

‘Quite a bit of altitude sickness’

Christopher Davis, MD, assistant professor of emergency medicine, led WEM’s application for the Greenland subcontract and will serve as medical director for the operation. He said adjusting to high altitude is the most common health complaint of the researchers, who spend weeks to months at a time at Summit Station. “Most researchers are coming from sea level and they fly directly to 11,000 feet, so you see quite a bit of altitude illness,” Davis said.

Davis, who is also medical director of Altitude and Mountain Medicine Consultants, a branch of the Travel, Expedition and Altitude Medicine Clinic, plans to visit the Summit Station this spring to ensure that the medical equipment is up to date. During the summer high season, about 50 researchers live and work at the station. In the winter, fewer than 10 people live at the facility, according to Davis. Much of the research conducted at the facility focuses on climate and weather.

“Our department chair, Richard Zane, MD, has been very supportive of us being entrepreneurial and extending the reach of our medical expertise to far afield,” Davis said. “This is also in line with the university’s research mandate.”

Another opportunity that Greenland provides: Teaching an unprecedented course in one of the most dramatic locations on the planet. Lemery and Davis together will teach “Introduction to Polar Medicine” over a week in August. Students will receive three hours of credit for the accredited course, as well as a Wilderness First Aid certificate.

The course is designed for pre-health students and will take place in the town of Ilulissat, Greenland. “We think it’s going to be an awesome opportunity for students,” Lemery said. The deadline to register is March 15, 2016; click here to register or for more information.