Mark Kennedy, finalist for University of Colorado president, told an audience at the CU Anschutz Medical Campus Wednesday that his skills in running a large business, engaging stakeholders and his passion for academia make him the right candidate for the position.

The president of the University of North Dakota (UND) is spending the week holding open forums with faculty, staff and students across the four CU campuses. He was introduced to the nearly full auditorium by CU Anschutz Chancellor Don Elliman and Sue Sharkey, chair of the Board of Regents.

“In my 35 years in business and academia, I’ve always checked my values at the door,” said Kennedy, a former executive at major corporations and Republican member of Congress from 2001-07. He also held teaching and research posts at Johns Hopkins and George Washington University, where he directed the Graduate School of Political Management. 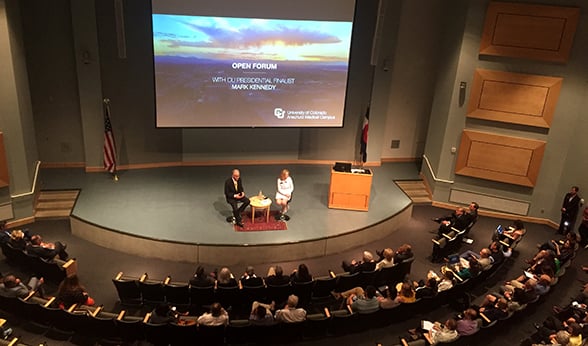 Kennedy, a first-generation college graduate, underscored themes of unity, collaboration and diversity, as well as his hopes that every CU student have the opportunity “for their personal moonshot, no matter what their dream might be.”

The audience questions, occasionally challenging, focused chiefly on his political views, especially his voting record as a Minnesota congressman and its impact were he chosen CU president (the Board of Regents will vote in May). He was asked about his stances on affirmative action, same-sex marriage, Deferred Action for Childhood Arrivals (DACA), stem cell research, gender inequity, gun violence research, reproductive rights and climate change.

Asked why he’s changed his views on same-sex marriage — he voted against it while in Congress – Kennedy said he’s had multiple experiences that “have shown me that I need to have a bigger, broader view … and I’m committed to it.”

Under his leadership since 2016, he noted, UND has made more progress instituting LBGTQ-plus community protections and other services geared toward diversity than in the previous decade.

Inclusivity as a competitive advantage

“I’m not neutral on this subject. I am an advocate for making sure we’re reaching out to all communities, making them feel welcome,” he said. “… Inclusivity is a competitive advantage for the university.”

He said he should be judged by his university leadership track record, where “this never became an issue,” rather than his congressional voting record. However, when it came to votes on education or National Institutes of Health (NIH) resources, he said he always voted in favor of additional funding, including a vote to double NIH funding.

On affirmative action, Kennedy said, “It’s a combination of affirmative action applied whenever it makes sense to achieve the diversity you need in a university environment … as well as the financing to make sure we have the scholarships and outreach, which is a recruiting policy.”

An online question noted that Kennedy voted against stem cell research while in Congress. Kennedy responded that he is not a micromanager, and he will not impose his values on the university.

“My values will be what’s in the best interest of our faculty, staff, students and the state,” he said. “You have great academic communities that decide what type of research should go on or not. Academic freedom protects that.”

He was then asked how he would prevent his personal beliefs from interfering with life-saving research, training and medical care provided at CU Anschutz surrounding women’s reproductive rights and abortion.

Kennedy stressed that it would be faculty alone who decide what and how they research. His focus would be to help attract top medical professionals, professors, staff and students to CU.

He said he strongly supports CU’s ongoing research into gun violence. He also said he would support an examination of gender inequities, noting that it’s “a systematic thing that needs to be dealt with comprehensively.”

As for college affordability, Kennedy said he would strive to keep students on the path toward a degree to ensure a full return on their investment, work on improving efficiencies and look for alternative revenue sources, including through online education.

Kennedy responded that he has “a very strong” civil rights record, noting his UND efforts toward unprecedented LGBTQ protections, a first-ever campus-wide survey on inclusivity, and launch of strong protections against sexual violence. At George Washington, he led the campaign to offer the school’s first Spanish language degree. Also, he said, he led the university’s effort to celebrate Martin Luther King Day. At UND, his eight-member executive committee includes four women – split evenly between women he promoted and hired.

With Kennedy having a relatively short tenure at UND, another attendee noted, how would the CU community know he is committed for the long haul?

Kennedy said he views the CU presidency as the capstone to his academic career.

“This is where I want to be for an extended period of time because many of the goals I have in terms of outreach, expanding research, expanding the impact of the institution on Colorado, won’t be done in a year or two, and I want to be here for the long term.”

Asked if he supports CU’s efforts to be a leader on climate change and climate change research, Kennedy cited legislation he co-authored to bolster alternative energy funding.

“I am strongly supportive of the research being conducted on climate change here at the University of Colorado,” he said, “as well as promoting investments in research that will make our economy ever more energy efficient.”

Photos by David Kelly and Julia Milzer, Office of Communications