It’s not a stretch to say that David Elm, PhD, who mentored more than a thousand University of Colorado pharmacy students over three decades, has perhaps contributed to the health of more Coloradans than any other health care professional in the state.

Elm, now retired, will tell you that his career constituted the best pharmacy job in Colorado – with much enjoyment coming from his unmatched experience as a mentor. Starting in 1978, he became the manager of The Apothecary, a full-service professional pharmacy operated by licensed pharmacists, at CU Boulder’s Wardenburg Health Center, serving university students, faculty, staff and alumni.

“I probably had more one-to-one mentoring experience than anyone else on our faculty,” said Elm, adding that, until the School of Pharmacy moved to Denver in the 1980s, every pharmacy student was required to do a rotation at The Apothecary.

“I can go anywhere in the state and find someone I know from The Apothecary,” Elm said. “That was their first clinical exposure to physicians, nurses, patients and prescriptions.”

New scholarship in his name

Being one of eight children raised on a dryland farm in Nebraska, it’s not surprising that Elm has a direct, plainspoken nature. Asked why he stayed on at The Apothecary – where he also worked as a graduate student – for his entire career, Elm said, “I liked what I was doing. The school liked what I was doing. I was asked to stay, and so I did.” 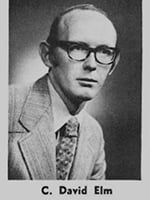 Now his name and stellar contribution to the Skaggs School of Pharmacy and Pharmaceutical Sciences carry forward in the C. David Elm Pharmacy Practice Scholarship. The school created the scholarship in his honor to commemorate Elm’s extraordinary impact.

He modeled The Apothecary after the typical – and indispensable – corner drugstore found in any small town. “We felt we had a corner drugstore on campus, serving a ‘town’ of over 10,000 faculty and staff,” Elm said. “Then we had about 25,000 ‘visitors’ who came in for most of the year and then left for the summer – those were the students.

“It was just a small-town mentality, and people love that,” he said. “You get to know everybody by name.”

‘Stories about of Dave helping’

Lou Diamond, former dean of the CU School of Pharmacy, said Elm’s professionalism, high ethical standards and warm nature endeared him to everyone at The Apothecary – be they staff, patients or student trainees.

“Stories abound of Dave helping financially strapped patients get their medications without delay and making after-work deliveries of prescriptions to the homes of frail patients,” Diamond said. 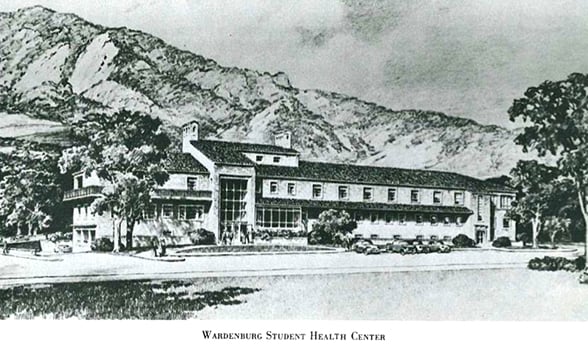 The Apothecary, which Elm managed for over three decades, is located inside Wardenburg Health Center at CU Boulder.

On one occasion, a university employee received an urgent call at work informing her that her house was on fire. Elm, knowing the circumstances of her family’s medications, refilled them, drove to the scene of the fire, talked his way past the fire perimeter, and delivered the medications to a grateful patient.

Meanwhile, student trainees going through The Apothecary (they still do, but the site is no longer required), “were absolutely ebullient in their comments,” Diamond said. “A rotation through The Apothecary was something to be prized because students knew the experience would open new doors, enrich their personal lives and guide them on their way to a fulfilling professional career as a pharmacist.”

Elm’s Midwestern upbringing also imbued a deeply-rooted love of country and “unabashed patriotism,” the former dean said. So, Elm asked that his scholarship be awarded to an active or honorably discharged member of the U.S. armed forces. The overall goal is to raise a minimum of $100,000 so his scholarship will be both significant (at least $4,000 per year) and last in perpetuity.

Elm’s son Jason served in both Gulf Wars and is, along with Elm’s grandson, currently serving in the reserves. Elm’s brother-in-law Lt. Gen. James Gordon Roudebush (retired) served as the 19th Surgeon General of the U.S. Air Force.

“I’ve seen what folks go through when they have a family member who is in the armed services,” Elm said. “Service members sacrifice, both financially and emotionally. When your family is split up, it’s just hard on family life. So, if I could ease that burden on someone else – say, through a scholarship – I would do it.”

Another aspect of Elm’s personality is reflected in the scholarship: He much prefers patient and practitioner contact over laboratory work. “I like the practice part of pharmacy more so than the research.”

Again, taking the mindset of the small-town pharmacist, Elm loved the milieu of the academic atmosphere. “We served everyone from A to Z – anthropologists to zoologists,” he said.

Special bond with the Buffs

He enjoyed his supervisors as well. “I was fortunate enough to work for deans who gave me a job to do, provided me the resources and authority to do my work, and then simply evaluated me on the results.”

Elm also forged strong relationships with CU Athletics because The Apothecary provided the department with medical supplies. He became a devoted fan and is a 50-year season ticketholder to Buffaloes football – something that might surprise his childhood friends in the Cornhusker state.

Elm now lives in Lafayette, but he frequently returns to Nebraska to help his siblings farm and raise cattle. He remains a pharmacist at heart, and is glad to see the stature of his profession climb over the years.

He noted that the move toward integrating all the health-profession students, first on the Health Sciences Center campus in Denver, and later at the CU Anschutz Medical Campus, was a key impetus behind pharmacists becoming valued and contributing members of the health care team.