If you look carefully, you might see them: white Tic-Tac-sized plastic boxes dotting room walls and hallways across the CU Anschutz Medical Campus. The devices may be inconspicuous, but they are powerful tools that help keep the campus secure.

The new hardware, connected to the SafeZone app, expands location information that gets relayed to University Police when an app user sends a one-touch emergency alert, First Aid alert or a help call. The small beacons were recently installed throughout University buildings, augmenting the network of boxes placed earlier in the Education buildings and Strauss Health Sciences Library.

“The network of BLE (Bluetooth low-energy) beacons provide indoor location to University Police when emergencies are reported through SafeZone, giving University Police more accurate location information vs. traditional GPS,” said University Police Chief Randy Repola. The beacons only broadcast a signal that is picked up by the phone; no video or microphones are part of the system. 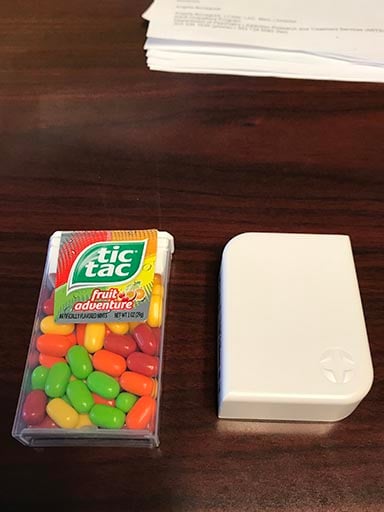 The SafeZone beacons installed throughout campus are about the size of a Tic-Tac box.

The technology sends police the X-Y coordinates of the user’s location, but also the floor of the building in which they’re messaging (as long as the user has Bluetooth activated). “So if it’s someone who’s not familiar with the room numbers and they can’t call tell us what room they’re in, the app will tell us that,” Repola said.

The SafeZone app, a state-of-the-art safety app, is available to anyone who has a cuanschutz.edu email address. The app has been operational in parts of campus for a few years, but the new beacon installations enhance the system’s data capability. The app actually delivers information to University Police faster than a 911 call. A 911 cell-phone call made from campus first gets routed to Aurora Public Safety dispatch, then switched to University Police, causing a slight delay (911 calls coming from campus desk phones, yellow/red phones, etc., are connected directly to University Police).

“We get better data due to the app, and we can initiate a text back and forth to the caller,” Repola said. “This gives us a lot more detail about the callers – who they are and where they are. The app gives us data – and the most important is the location.”

Through the app, which was created by a Colorado company, the police can also customize and target outbound messaging for non-emergency incidents. For instance, in the case of a rush-hour car accident on Peoria Street, they can suggest SafeZone users take an alternate route home.

The app also has a check-in timer that notifies police when a user is moving between locations on campus and when he or she expects to reach the destination. For instance, if a person is leaving work late at night and knows it takes 10 minutes to walk to their car, they would set the timer for 10 minutes. If the user does not cancel the timer before it expires, SafeZone will automatically send an alert to the University Police, who will attempt to contact the person and send an officer to assist him or her.

The app also includes a detailed Google map of campus, showing the user his or her location to aid with navigation. Additionally, the app provides links to useful emergency response information that provides guidance to users for situations such as severe weather. Importantly, the police can’t track an app user’s location unless the individual sends an alert, activates the check-in timer, or checks in.

As the University rolls out SafeZone, the older “blue light” phone stations will be converted to wifi hotspots. The current blue light system is outdated and an update will cost approximately $164,000. Therefore, now that SafeZone is live in all CU buildings, campus officials have determined that it makes sense to repurpose the phone locations.