Evalina Burger, MB ChB, MMed, an expert spine surgeon and accomplished administrative leader, has been named chair of the Department of Orthopedics at the University of Colorado School of Medicine, effective Nov. 1, 2018. 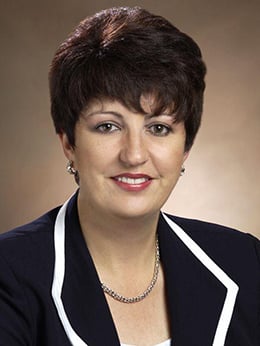 Burger, who joined the CU School of Medicine faculty in 2006, is a successful and highly productive surgeon who has been recognized frequently by her peers as one of the best physicians in the country. In addition to her clinical work, Burger has been an active investigator and educator working to find new metal-alloy compositions to improve orthopedic implants.

She has written more than 60 peer-reviewed publications and several book chapters. She also serves on editorial boards of scholarly journals and has co-edited two textbooks on spine surgery. She has actively participated in FDA clinical trials for spine implants and has received several grants to support her work.

“Through innovation, infrastructure and inclusion, I see the Department of Orthopedics becoming a leader and an integral part of healthcare delivery on a national level,” Burger said. “With a diverse faculty, I hope to grow the department into a global destination for healthcare excellence.”

Burger was selected after a national search to succeed Robert D’Ambrosia, MD, who joined the CU School of Medicine in 2002 and who has been a catalyst for growth and an inspirational champion of the university’s diversity efforts. When D’Ambrosia joined CU, there were six faculty members in the department and there are now more than 110.

Burger has also been a key administrative leader in the Department of Orthopedics, serving as vice chair of clinical affairs since 2008. In her leadership role, she led efforts in clinical service development and reorganization and strategic business planning. She has also helped improve workflows to enhance quality patient care in a teaching environment.

“Dr. Burger is a talented surgeon and a dedicated colleague,” said John J. Reilly, Jr., MD, dean of the CU School of Medicine. “She articulated an ambitious vision for the department, building upon the foundation established by Dr. D’Ambrosia, and clearly recognizes the importance of all of our missions. She successfully treats patients from all walks of life while efficiently managing the need for high-quality and efficient care in an academic setting. We are fortunate to have her on our faculty and I look forward to working with her in her new role as the chair of a growing department.”

Burger graduated with a medical degree, MB ChB, from the University of the Orange Free State in South Africa in 1984. She also earned a graduate degree, an MMed, from the University of Pretoria in 1993. In 2000, she became the first female orthopedic surgeon from South Africa and only the third woman ever to receive the American-British-Canadian Traveling Fellowship, which is awarded to highly accomplished young surgeons from English-speaking countries.

Prior to joining CU, Burger was an associate professor at Louisiana State University Health Sciences Center in New Orleans from 2001 to 2006. While there, she helped establish the first fully functional orthopedic clinic after Hurricane Katrina.