Home News For Migrants, the Path to Happiness Often Carries a Traumatic Mental Toll back to News

A psychiatry researcher finds her study data in the harrowing stories of Latin Americans’ journeys of fleeing poverty and violence.

For many scientists, communicating their research involves turning data into stories. However, for Laura Vargas, PhD, MSW, MPA, an assistant professor in the Department of Psychiatry at the University of Colorado School of Medicine, her data already are stories.

Vargas’ laboratory is mostly in the field, where she interviews Latin American immigrants fleeing violence and poverty about traumatic experiences in their home countries and along their migratory routes to the United States. The data in these stories help Vargas to understand how individual characteristics – such as gender, age, sexuality, education and country of origin – affect trauma exposures and their impacts.

Vargas brings her training as a scientist and practice as a social worker to her research.

The ultimate goal is to use knowledge of mental health vulnerabilities among Latin American immigrants in the United States to improve the development and delivery of appropriate treatment, for the right person, at the right time.

Vargas said her bicultural upbringing influenced her passion for integrating the power of stories with the rigor of science to understand mental health vulnerabilities among Latin American immigrants.

She was born and raised in Mexico to an American mother and a Mexican father. Her family always opened their doors to passing migrants, and she empathizes strongly with those who feel forced to flee their country and adapt to new cultures.

There is a major misconception among Americans that all migrants want to come to this country, said Vargas, who recently spent two months at the Catholic Charities Humanitarian Respite Center in McAllen, Texas, a high-volume immigrant crossing point on the U.S.-Mexico border.

Typically, ‘plan A’ for Latin Americans trying to flee violence and poverty is to first go to a different part of their own country, while ‘plan B’ is traveling to a neighboring country due to proximity and similarities in language and culture, Vargas said. If those choices prove unviable, then they might attempt ‘plan C’ – the risky journey north to the United States.

‘Migrants have a target on their back’

Given the pervasiveness of drug trafficking, gang activity and political violence in Latin America – the region with the world’s highest homicide rate – trauma is common among immigrants arriving at the U.S. border. Although fleeing home-based danger, they encounter continued threats along their route to a safer place.

South American migrants must pass through a treacherous 60-mile stretch of dense rainforest, steep mountains and vast swamps called the Darién Gap, a roadless, lawless pass separating Colombia in South America from Panama in Central America. It’s strewn with dead bodies, a harbinger of the many dangers that lurk, both from nature and from armed guerrillas. The dangers don’t stop for those who survive the Darién Gap or are just beginning for those who set out from Central America.

“Migrants have a target on their back throughout the entire journey,” Vargas said. “Every smuggler, every extortioner, every robber, every abuser, who are they going to prey on? The people that don’t have any protection. But they may have some resources because they need to get somewhere else.”

When reflecting on the stories she heard while in McAllen and on her motivation for pursuing this research, Vargas explained that migration always has been and will continue to be part of the human experience. This is because all of us, regardless of where we were born, seek happiness, health and dignity.

'Life always finds a way through’

So vital is the need for these fundamental human rights that immigrants overcome seemingly insurmountable obstacles to reach the U.S.-Mexico border. The stories include the Haitian father who carried his disabled son 8,000 miles from South America. And the 20-year-old woman who fled gang violence in Honduras, was kidnapped in Mexico, escaped after three weeks, then lost her legs in a train accident. Both eventually made it to the border.

“It’s insane. You don’t believe it. But it’s true,” Vargas said. “Life always finds a way through, like plants that grow out of pavement. The incredible thing about the people that I meet is that they understand their circumstance. They know that they are going to be targets. They know that they are not welcome. Migrants will tell you, ‘I know that I’m not welcome and maybe I wouldn’t blame these societies for not welcoming me, but I don’t have a choice. I have to survive.’”

Vargas’ current research focuses on understanding individual characteristics that impact mental health challenges among Latin American immigrants. But in the future, she aims to use this knowledge to identify which points of intervention matter the most and for whom. She intends to help change systems upstream to prevent mental health problems downstream.

She explained that to effectively reduce health disparities, the focus must be on systemic change rather than the “pull yourself up by your bootstraps” emphasis on individual initiative. “This is essential because you can row and row and row and row and never get upstream if you were way downstream,” she said.

Structural inequalities that have been pervasive throughout history underly the harrowing stories Vargas hears. The human condition, she said, is often not a product of personal choices but of a system designed to concentrate disadvantage rather than distribute opportunities.

However, she said these systems can be changed, which gives her hope. But we must have the will, Vargas said. We must see all humans as equally deserving of the happiness, health and dignity that so many people risk everything to find. 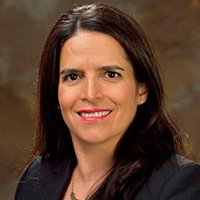