Home News From Selfies to Being Seen: Doctor Honors Women of Color on Front Lines back to News

In the early days of the pandemic, when many people worried about where to find toilet paper, Sarah Rowan, MD, had deeper concerns. Rowan appreciated the sudden spotlight on frontline medical providers ­– they graced magazine covers and even large murals – but she noticed something was missing.

“It made me think, ‘Why do you never see women of color in the media as a picture of a doctor or any healthcare provider?’” she said. “It was about a month into the pandemic (in the U.S.), and I thought maybe I should do something and share it on social media or something.” 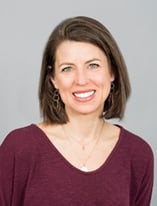 Rowan, an associate professor of medicine-infectious diseases at the University of Colorado School of Medicine and an infectious disease specialist at Denver Health, asked a physician moms’ Facebook group for photos of women of color. Her idea was to turn the photos into artistic portraits, she told the group.

Selfies by the dozens flowed in, with most doctors donning their PPE. Emails accumulated. Within a week, Rowan had 150 photos.

Rowan enlisted her sibling-in-law to launch a website to feature the photos, while her nanny – hired at the start of the pandemic to help with the kids – sorted photos and connected with artists. Another friend created a photo collage of all the submissions. When the website went live, still more emails came in.

The tremendous response “really surprised me, and it’s just grown and really kind of caught on and gone viral,” said Rowan, who paints and draws in her spare time. She asked artist friends if they’d like to interpret the selfies that poured in, even some from overseas.

The first physician portrait, a charcoal drawing by Mark Shelton, captured intensity and softness in the eyes of Dr. Geetha Devdas Thapar. “I was just like, ‘Wow, that’s so good,’” Rowan said. “I started seeing the quality of the portraits people were turning in. 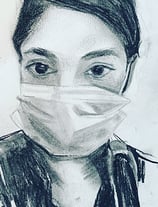 “I think artists and so many other people felt like they wanted to give back (during the crisis) and didn’t feel like they had much to give. So this was a nice opportunity.”

“Strength” most exudes from the portraits, according to Rowan. A bit of fatigue shows through in many of the women – not surprising given the pandemic – but “I think they all look very strong, confident and ready. I did one (portrait) where a nurse is helping a doctor get ready to go into a procedure. I was trying to convey the way it’s a team effort.”

As the “Women of Color on the Front Lines: Portraits of Unsung Heroes” website came together, Rowan shared the project with friend and colleague Shanta Zimmer, MD, a professor of medicine-infectious disease and associate dean of diversity and inclusion at the CU School of Medicine.

Rowan and Zimmer, joining Denver’s weekly infectious disease conference calls about COVID-19, were quickly aware that minority populations were being hit hard by the pandemic. “One of the things that stood out to all of us was the disparities in the hospital-wide patient population, which of course is really in the news now,” Zimmer said.

Zimmer marveled at how Rowan, more than a month before the George Floyd tragedy sparked worldwide protests, recognized how a segment of society – women of color in healthcare – was underrepresented in the media and elsewhere. “And she fixed it,” Zimmer said. “It’s beautiful and inspiring.”

Helping them to be seen 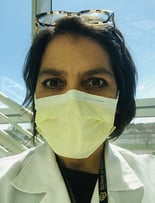 Zimmer said one of the most troubling aspects of her diversity work is hearing people of color say that they often don’t feel seen.

“I think what Sarah’s project did is really, in a very deliberate and literal way, made them visible, and also celebrated them,” said Zimmer, whose own portrait, a watercolor, was painted by artist Aimee Moore. “It’s a very simple idea, but a very powerful one.”

Zimmer shared the project with Black physicians she had worked with when she was a residency program director in internal medicine. Scattered around the country, these doctors immediately sent in selfies.

“That’s when I got the understanding of how much it meant to them to have been seen as part of the face of the pandemic – and the fight against it,” Zimmer said.

While women of color are underrepresented in the healthcare workforce – Association of American Medical Colleges data show that Black women account for only 5% of U.S. female physicians – the doctors hope that highlighting the disparity can shift the narrative.

Rowan hopes to inspire young people of color to consider healthcare as a career. A teacher friend plans to post collages of the “Unsung Heroes” in her classroom.

‘Owe them our support’

“I hope it’s inspirational to young people to realize that there are many people who look like them that are in medicine,” Rowan said. “We need to increase diversity in the pipeline, but also support people who are already in medicine. We should highlight the fact that around the country there are so many providers of diverse backgrounds who are working really hard right now.”

She added, “We owe them our support – to stay in the field, to succeed and to move into leadership.” 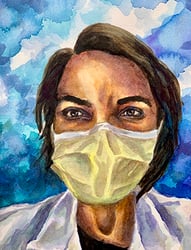 The portraits will soon be featured as a virtual exhibit at the McNichols Civic Center Building. Also, a chalk artist and muralist in Boulder reached out to Rowan, expressing interest in capturing some of the physician portraits in a public display in Denver or Boulder.

Rowan plans to expand the project’s scope by seeking photos of other female healthcare workers.

“It’s neat to honor women (physicians) who’ve gone through the endless years of training and scrutiny and pressure,” she said. “But I also think that nurses, phlebotomists – everybody in healthcare – is putting themselves in harm’s way, working hard and proving essential. I think it would be great to add all kinds of healthcare workers.”