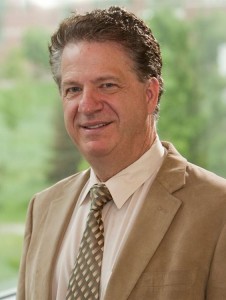 AURORA, Colo. - A genetic mutation that occurred among prehistoric apes to survive food scarcity could be behind today’s pandemic of diabetes and obesity, according to an article by Richard J. Johnson, professor of medicine at the University of Colorado Anschutz Medical Campus.

The article, published in the October 2015 edition of Scientific American, says that a gene mutation that happened in ancient European apes, perhaps 15 million years ago, may have helped them store fat during seasonal famines that likely occurred during a period of global cooling. Now in a time of plenty, that same genetic mutation may be contributing to soaring rates of obesity and diabetes.

“These ancient apes were living primarily on fruit, which is rich in the sugar, fructose.  At that time of global cooling, fruit became progressively less available in Europe where many of these apes were living,” said Johnson, MD, a world-renowned expert on the underlying causes of obesity, kidney disease, diabetes and hypertension. “The resulting mutation caused an increase in uric acid levels.”

High uric acid levels, said Johnson, are responsible for a number of diseases including gout but he also found that it helps fructose store fat and induce insulin resistance.

“While this mutation would have been beneficial when food, especially fruit, was less available, in today’s society where many foods contain fructose from table sugar or high-fructose corn syrup, it may well be increasing our risk for developing obesity or diabetes,” Johnson said. “The irony is that a mutation that played such a critical role in the survival of our oldest ancestors is now putting many of us at risk.”

Johnson and his colleague Peter Andrews, professor of anthropology at University College London, have suggested that this mutation may have acted as a “thrifty gene,” based on a hypothesis proposed by the geneticist James Neel more than 50 years ago.  Neel suggested that one reason we may be at increased risk for diabetes is due to genes acquired in our past to help us store fat during times of famine, genes that are now haunting us in a time of abundance.

Critics of that hypothesis have claimed that periods of starvation among primates were rare and when they did occur they were too short for a mutation to develop.

But after careful research, Johnson and his collaborators, including Miguel Lanaspa, PhD, of CU Anschutz and Eric Gaucher, PhD, of the Georgia Institute of Technology, found evidence that a mutation in the uricase gene enhances the ability to convert fructose – often obtained by eating figs - to fat during famine.

“Our hypothesis suggests that a mutation in a gene 15 million years ago, which was beneficial at that time, might now have a haunting role in the epidemics of obesity, diabetes, kidney disease and heart disease that are prevalent in our society today,” Johnson said.

According to the study, the earliest apes evolved from a common ancestor in East Africa some 26 million years ago.

“At the time, Africa was a tropical Eden, full of deciduous woodlands and tropical rain forests, where the apes feasted primarily on fruit,” the article said.

It was also a time of global cooling when sea levels fell, forming a land bridge between Africa and Eurasia. Some of these well-fed apes crossed into Europe where they continued to dine on fruit in tropical rainforests. But colder temperatures led to an increasing lack of fruit, followed by starvation and ultimately to the extinction of apes in Europe.

Yet it was during this time of seasonal starvation that a mutation occurred in the uricase gene, Johnson said.  Uricase is an enzyme that breaks down uric acid, a waste product produced when food is metabolized.

“The ancient mutation in the apes would have crippled the enzyme and thus would have caused uric acid to build up in the blood,” he said.

Johnson and Andrews have hypothesized that a European ape bearing this mutation came back to Africa where it became a common ancestor to modern African apes and humans. When the mutation first occurred, the serum uric acid likely rose only modestly because while fructose in fruits produces uric acid, the amount ingested is relatively small in non-Western diets. Modern African apes that have lost the uricase gene have slightly higher uric acid levels than animals that carry uricase.  Indigenous people like the Yanomamö of South America, who retain ancient ways of life, also have only slightly higher uric acid levels.

Yet in societies with Western diets and habits, average uric acid levels are skyrocketing, Johnson said.  That’s mostly due to the ingestion of large amounts of foods that raise uric acid like table sugar, high fructose corn syrup, and purine rich beer and meats. Those suffering from heart disease and obesity have higher uric acid levels in their blood than leaner, fitter people.

“The American Heart Association, after weighing the science, has recommended slashing sugar intake to six teaspoons a day in women and nine teaspoons in men,” Johnson said. “Even less would be healthier.”