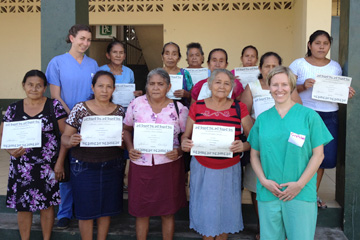 When she was a child, Gretchen Heinrichs would listen to her mother tell tales of East Africa where she worked as a Peace Corps volunteer.

“Those stories sparked my interest in the world,” recalled Heinrichs, MD, director of maternal health programs at the Center for Global Health, part of the Colorado School of Public Health. “My parents would take us to different countries each year so we could experience an array of cultures.”

So perhaps it’s not surprising that Heinrichs has charted her own international course, traveling the world and providing medical care in India, Nigeria, Rwanda and beyond.

Now she’s in Guatemala doing what she loves most – caring for pregnant women and children in one of the most impoverished places on earth.

“I was looking for a project where I could really get my feet wet,” Heinrichs said. “I talked to Dr. Steve Berman and he said they really needed someone to take over the maternal health program at the new Center for Human Development in Guatemala.”

The center opened last April on a banana plantation in rural Guatemala, the result of a collaboration between the Colorado School of Public Health, Children’s Hospital Colorado and AgroAmérica, one of the world’s largest fruit producers.

Faculty and staff affiliated with the University of Colorado are rotating through the center, providing care to thousands of banana workers and their families.

And a major part of that effort is the Madres Sanas or Healthy Mothers Program.

“Reducing maternal and neonatal mortality is the foundation for achieving sustainable development in impoverished communities,” said Stephen Berman, MD, director of the Center for Global Health. “Successful programs must be built on interventions that save the lives of mothers and babies. This is why the maternal/neonatal program is so critical to the Center for Human Development.”

She hopes to have a supervisory nurse and trained birth attendants called `comadronas’ deliver an expected 40 babies per year at the center.

The assistant professor of obstetrics and gynecology at the CU School of Medicine, who also works at Denver Health, has collaborated with her public health colleagues to create a registry of mothers to monitor throughout their pregnancy.

“Most of the women in that area have at least three children and often more,” she said. “The majority start at age 14. In fact, a third of our registry is under 18.”

The Center for Human Development sits in the steamy, impoverished Trifinio region of southwest Guatemala. The villages are small, remote and scattered. There are a few isolated health posts providing rudimentary care but the nearest hospital is 50 miles away. Infectious disease, contaminated water, parasites and malnutrition are rife.

Local health workers called `tecnicas,’ work in the 12 villages surrounding the banana farm to collect basic medical histories and conduct exams of pregnant women. The information is sent via smartphone to Aurora.

“We analyze the data and generate a weekly report that is sent back to the site and they carry out the instructions,” Heinrichs said. “We see weight, fetal heart beat, blood pressure and urine dip results.”

Emergency cases can be seen at the Center for Human Development which has fully furnished labor and delivery suites, working laboratories and dental clinics.

Heinrichs was at the center in July, shortly after patient fees dropped from $5 per visit to $2.50. The banana company, Banasa, also agreed to deduct the cost directly from their worker’s paychecks, meaning women no longer had to ask their husbands for the money which was often a problem.

The results were immediate and dramatic. Instead of seeing zero to three patients a day, the staff saw 20 or more. Women came in with ovarian cysts, urinary tract infections and they often brought in their children who suffered a range of problems.

“In countries like Guatemala where poverty and disease impact the most vulnerable, saving mothers becomes an imperative, as they represent the pillar of the family and the future of their children,” said Edwin Asturias, MD, associate director of the Center for Global Health. “The Madres Sanas program is providing an innovative way to help reduce the complications of pregnant women, and brings the advances of maternal and newborn care closer to them.”

The next challenge, Asturias said, will be to evaluate the program “and pack it in a toolbox that could be used by other health systems to reduce the mortality of women and young children.”

All of this takes money. AgroAmérica, operated by Fernando and Gustavo Bolaños, has been extremely generous, donating $1 million to build the facility. Project C.U.R.E. donated the medical equipment and Children’s Hospital Colorado has also been a major funder. But Heinrichs and others are looking for other funding sources.

“We are trying to do a crowdsourcing campaign to raise money for additional women’s programs,” she said. “We would also like to extend the hours of the clinic to 24-hours a day, seven days a week.”

Heinrichs will be returning to Guatemala in February.

“In many ways, this has been the most rewarding work I have done,” she said. “It is a major challenge yet it combines everything that I’m most passionate about. And most of all, it allows all of us to truly make a difference in the lives of people who really need it.”