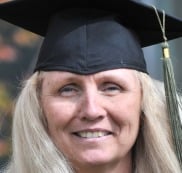 At the Anschutz Medical Campus commencement ceremonies this year, nearly 800 graduates took the next step in their lives and careers. All of them have taken personal journeys to complete degrees, but perhaps two of the most unusual stories are those of Ian Justl Ellis, MD, and Diane Banet, PharmD.

Banet, a graduate of the Skaggs School of Pharmacy and Pharmaceutical Sciences, began a ten-year effort to complete her degree while she was a grocery store manager with only a high school diploma. She would not have been able to finish school, she believes, without the help of a fellow student she calls a "friend for life." 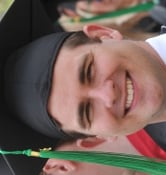 Ellis, a graduate of the University of Colorado School of Medicine, actually left medical school at the end of one semester to pursue a dream that had been born after the rocky end of a college relationship.

Given the long hours, many years and sheer perseverance it takes to successfully make it through medical school, no one could blame a graduate for doing a little dance step after he picks up his diploma.

In the case of Ian Justl Ellis, it would be a professional dance step—foxtrot, tango, cha-cha, salsa, swing—learned from experts in the United States and Brazil and perfected in national competitions.

College can be transformative: Part 1

The son of a Baptist missionary, Justl Ellis moved to Brazil with his family when he was 11 years old. Homeschooled by his mother, he was headed to his freshman year at Union University in Jackson, Tenn., by the time he turned 16.

“Going to college at 16 seemed cool, but in hindsight I was way too young,” said Justl Ellis. “I had no earthly idea what I was doing or what college was about.”

That changed when, during his junior year, Justl Ellis tore cartilage in his knee playing basketball. Watching what surgeons did to get him back on his feet opened his eyes to new possibilities.

“The fact that I couldn’t play sports and couldn’t even walk was a huge problem,” Justl Ellis said. “To be able to do it all again after surgery was an amazing thing.”

Justl Ellis started to study anatomy and toyed with the idea of becoming an athletic trainer, until he realized how limited his practice would be. Then he began thinking that he could go one step further and become a physician, capable of helping others just like he had been helped.

There was only one problem with that plan. Justl Ellis was, by his own admission, “terrified of science.”

“Math and calculus, biology and chemistry—those were the things smart people did,” he said. “It took an incredible leap of faith, but I just figured if I studied hard I could do it.”

College can be transformative: Part 2

During his junior year of college, Justl Ellis and his girlfriend decided to try out salsa dancing on a lark. The experience was a revelation.

“I was the world’s worst dancer,” Justl Ellis said. “I knew I was horrible, but I had an amazing time.”

By the end of that evening his girlfriend confirmed his suspicion.

“She said ‘You should never dance again, because you will never be good,’” he recalled. In case he had any doubts about how she felt, she added, “If you do choose to dance, please don’t ask me.”

Perhaps, it’s no surprise the relationship didn’t last. It ended in what Justl Ellis describes as a “reduce-your-world-to-rubble break-up.” When he started making a list of what he wanted to do with the rest of his life without the girlfriend, dancing was on his list.

After 5 1/2 years of undergraduate work, Justl Ellis graduated and started to apply to medical schools. With a little extra time on his hands, he decided to give dancing one more try—this time back in Brazil.

In Porto Alegre, he picked up the phone book and found a place to take lessons. Within weeks, he found himself dancing six days a week, four hours a day. By his own admission, “Dancing took over my life.”

“It was the most fun I had ever had,” he said. “It fulfilled so many niches—it was athletic, artistic, musical, social, technical and, above all else, challenging.”

What started off as a hobby turned into a passion when, after two months, he returned to the United States. Despite the naysaying former girlfriend, Justl Ellis displayed talent. He won the first competition he entered.

When he was accepted to the CU School of Medicine in 2007, he found a new dancing partner and a new level of coaching at Colorado Dancesport, which opened doors for more success in dance competitions. He was going to med school by day and dancing by night, with one foot in each world.

“I remember practicing rhumba steps while I was dissecting,” he said.

But Justl Ellis was a man divided. Despite all the extra time he had spent in college preparing for med school, he knew that his heart wasn’t in his academic work. He met with Maureen Garrity, PhD, associate dean of the School of Medicine, who suggested he take time off from medical school to pursue his dream of dancing competitively and come back when he was ready.

“The minute I heard that, I knew it was what I was going to do,” he said.

In January 2008, Justl Ellis threw himself into dancing full time. For the next two years, he competed everywhere from New York to California, winning the Denver Star Ball in Denver and the Holiday Dance Classic Championship in Las Vegas. At his peak, he and his partner took 7th place in the Open Championship Rhythm Division at the Ohio Star Ball, the largest Latin and ballroom dance competition in the world.

During this time, Justl Ellis also performed for multiple charitable fundraisers, including ones for Goodwill Industries, National Jewish Health and the Colorado Neurological Institute.

By January of 2010, he felt he had achieved his goal. Dancing no longer needed to be the focus of his life. He was ready to return to medical school 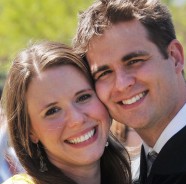 After commencement, Justl Ellis and his wife will head to St. Luke’s-Roosevelt Hospital Center on the Upper West Side of New York City, where he will practice emergency medicine. It’s a specialty he picked because it offers flexible shifts that will give him enough free time to continue to dance. The two worlds that once seemed incompatible to him now seem similar.

“To be good at dance and at medicine, you have to be a great communicator,” Justl Ellis said. “Dance is all about verbal and nonverbal communication. Medicine is the same way—about all different kinds of communication.”

Justl Ellis also hopes to do volunteer medical work in Brazil. He has no regrets about his decision to make his dancing ambitions secondary to his commitment to medicine.

“I want my legacy to be that I spent my life helping other people,” he said. “That’s why I came back to medicine. Dance is the thing I do that brings me the most joy, but medicine gives my life meaning.”

It took energy and determination for Diane Banet to work her way up the ladder at King Soopers, from courtesy clerk to store manager. She might still be managing a grocery store had she not been asked to supervise inventory in the store’s pharmacy. When customers came to the counter, they assumed she could help them.

“They would ask ‘What can you take for a cold or allergies?’” said Banet. “I couldn’t answer them. I would have to point to the pharmacist.”

Saying “I don’t know” went against Banet’s take-charge, can-do approach to life. Even though she had only a high school diploma (“I didn’t even take any science classes.”) and four children born within five years (“It sure felt like I was pregnant for a really long time!”), Banet started to think that maybe she should return to school to become a pharmacist. She was 41 years old.

“I was a good store manager, but I knew I couldn’t do it for another 30 years,” she said.

Ten years later, on May 24, 2013, 51-year-old Diane Banet, PharmD, accepted her diploma from the Skaggs School of Pharmacy and Pharmaceutical Sciences, surrounded by her fan club: her husband, her children, her grandchild, her siblings and her 90-year-old mother.

“I see an awful lot of people taking drugs for depression because they hate their jobs or they hate their lives, but they don’t do anything about it,” said Banet. “If you want something different, you have to go for it and have the commitment to do it. And apparently, I did.”

What it took: Part 1

For Banet, the journey to commencement at CU Anschutz started at Arapahoe Community College, where she picked up college courses part-time while she continued to work full-time. When it came time to apply to pharmacy school, relocating was not an option.

“If I couldn’t do it at Anschutz [Medical Campus], it wouldn’t get done,” she said.

Applying to attend school on the Anschutz Medical Campus carried special significance for Banet. The only one of six siblings to attend college, she grew up across from the campus in Hoffman Heights and remembers visiting patients in Building 500 back when it was still a hospital.

“This is my hood,” she said. “What a beautiful campus they have made here. It’s phenomenal.”

Banet decided to give herself three attempts to be admitted. The first year, her application was denied. The second year, she was wait-listed and then finally, accepted. Suddenly she found herself back in school with classmates who were her children’s age.

What it took: Part 2 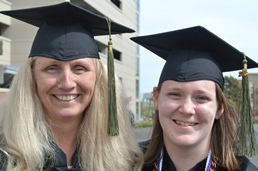 Banet knew that, no matter how hard she worked, she would need help. She and other older students found the “smart kids” in the class and enlisted them as tutors.
In particular, Banet credits fellow graduate Samantha Spencer for helping her get through four years of school.“I owe her more than I can ever tell you,” she said. “We will be friends for life.”

Throughout the past four years, Banet worked as a pharmacy intern with King Soopers, and she has a full-time job as a pharmacist waiting for her there. Now, when customers come to the counter, she will be the one with the answers.

“This is not helping people find the spaghetti sauce,” said Banet. “It’s helping them find out how to take care of themselves. You can change lives. You can save somebody’s life.”