Home News In Grief, Family Has a Message: Take COVID-19 Seriously back to News

The unfathomable struck the Lyster family six months ago: Their son and brother, Cody, became the youngest person in Colorado to die from the coronavirus. Kevin Lyster, a sergeant in the CU Anschutz Police Department, has a message: The virus doesn’t only affect older people. It can have a devastating impact on anyone, including the young and healthy.

Half a year. That’s how long it’s been since the Lyster family of Aurora experienced the unfathomable – the loss of their son and brother. Cody Lyster was just 21 when the coronavirus robbed him of a promising future, making Cody the youngest person in Colorado – and still one of the youngest – to succumb to the virus.

“I think now is really a good time to focus on these kids and say, ‘You know, it doesn’t just affect older people. It can affect younger people. Perfectly healthy people,’” said Kevin Lyster, Cody’s father.

Kevin, a patrol sergeant in the University of Colorado Anschutz Police Department, sits with his wife, Lea Ann, on the sofa of their Aurora home. Family pictures surround them in the living room. Kevin notes that the six-month anniversary of Cody’s death just passed, and that he and Lea Ann gave their umpteenth interviews to the media.

They share their story because the message – what they’re certain Cody wants conveyed from his “pulpit” – is essential, especially with COVID-19 cases again surging, and outbreaks occurring on some college campuses.

“You can go to these parties. You can do all this stuff you want to do. But ultimately, somehow it may find you,” Kevin says. “If you’re not going to follow the precautions and things you need to do, unfortunately, it can have an outcome that isn’t the greatest.”

Just a few feet from the sofa, a life-size cardboard cutout of Cody, wearing the purple jersey of his beloved Colorado Rockies, graces the door to the basement.

A life-size cardboard cutout of Cody, given to the Lysters by a compassionate family who heard their story, now graces the door to the basement of the family home.

Kevin self-isolated in the basement after testing positive for COVID-19 on March 21, just days after Colorado went into pandemic lockdown. The family followed the precautions, but the virus had already spread through the house. Soon, Kevin and Lea Ann both ran high fevers, felt extreme fatigue and had no appetite. Cody’s sister, Sierra, a high school sophomore, also tested positive, but remained asymptomatic.

A nurse at The Medical Center of Aurora

gave this baseball to the Lyster family. They

have received several baseballs with messages.

It hit Cody, a junior at Colorado Mesa University who was home for spring break, the hardest. He came down with a fever of 105 and began acting confused. The Lysters called for an ambulance on March 30, and within an hour of being at The Medical Center of Aurora, the athletic and strong young man, with no underlying conditions, was put on a ventilator. He would remain on the ventilator, in an induced coma, until his death on April 8.

The Lysters were in the process of moving Cody to UCHealth University of Colorado Hospital, where a clinical trial of Remdesivir was in the early stages, but his kidneys were in such bad shape that doctors feared he might not survive the 3-mile drive.

The family wasn’t able to be in the room with him the night he died, but thanks to the efforts of a nurse, who was by his side throughout, they spoke with him over Facebook Live on April 7.

“I still think to this day that he heard every word we said,” Kevin said. “It was extremely difficult to know you’re sitting here. You’re sick. You’re helpless. There’s nothing you can do. You can’t be there for the one person who needs you the most.”

‘Cody touched a lot of lives’

The support from the community – even from people around the globe – has been phenomenal, the Lysters said. Kevin’s CU Anschutz colleagues delivered food, and three different processions of police cars have rolled past the family home. The Lysters counted over 75 participants – police cruisers, ambulances, fire trucks and four marching bagpipers – in one procession.

Next spring, jersey retirement ceremonies will take place at Rangeview High School and Colorado Mesa University, where Cody was a member of the club baseball team. In July, the family held a celebration of life at Rangeview, allowing guests to attend in three shifts of 60. At the time of his funeral, only 10 people were permitted. At each ceremony, Cody could have easily drawn 500 people, his parents said. 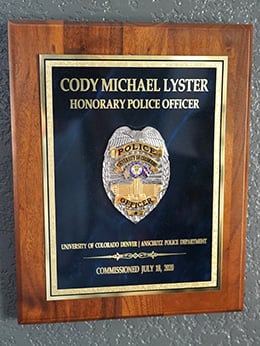 The University of Colorado Denver | Anschutz

Police Department made Cody Lyster an

this plaque to his family.

“He had a heart of gold. Cody did a lot, and he touched a lot of lives,” Kevin said.

Cody followed in his father’s footsteps by majoring in criminal justice. In Grand Junction, he worked part time for the Department of Revenue, doing marijuana and alcohol “buys” at retail outlets as part of underage-sales checks. “Because of his long hair and beard (emulating his favorite Rockie, Charlie Blackmon), he looked a lot older than he was,” Lea Ann said.

“He never took life too seriously, and he had this larger-than-life personality,” she added, wiping away tears.

“So many parents have reached out and told us what he meant to them,” Kevin said. “We even received messages of how Cody saved their kid’s life. There was a kid just starting at Mesa and was getting in a real dark spot, and Cody kind of took him under his wing and saved that kid.”

Kevin, Lea Ann and Sierra take comfort in knowing that if Cody could save a single life, as he did in the case of his troubled friend, he would. Kevin estimates his son has now saved hundreds, if not thousands, of lives worldwide by virtue of his story.

“The kid for the last six months has had the highest pulpit and is able to talk to millions of people all over the world about how severe the virus is. In death, he’s saving a lot of lives,” Kevin said.

For the Lysters, every day is a struggle. After COVID, there are three of them in the house, and each day is marked by three things: The memory. The message. The massive hole.

The virus caused permanent damage to Kevin’s lungs ­– they are 65% to 70% of where they should be – as well as to his heart. Hearing reports of some people falling ill to COVID a second time, Kevin takes care to avoid putting himself at risk of re-exposure during his overnight shifts at CU Anschutz.

Lea Ann is baffled by the cavalier, no-mask behavior of some people in her weekly bowling league. Then there is the sobering statistic of Colorado’s COVID-19 positivity rate surpassing 5% this week.

There is nothing abstract about the pandemic to the Lysters. They grieve what they’ve lost. Cody is irreplaceable.

“Here’s a great kid that went out there and went above and beyond to do things for youth and everyone else, who was affected by the virus,” Kevin said. “It took his life. In the end, he had a lot of life to live. There was a lot more he could have done.”