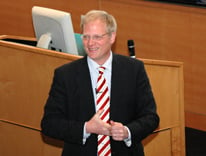 Wansink presented "Mindless Eating: Why We Eat More Than We Think" on April 12 as part of an Obesity and Health and Wellness Symposium in Hensel Phelps West Auditorium.

After showing some slides about America's well-chronicled obesity epidemic, Wansink explained how much of the research at Cornell -- especially its Smarter Lunchroom Movement -- is geared toward instilling better nutritional habits in children.

"We're talking about psyching kids out," he said. "Psyching them to eat healthier than they would."

He noted how the immediate environments of kitchens and lunchrooms shape people's food choices. "The first food you see when you open the cabinet you're three times more likely to eat than the fifth thing you see," Wansink said.

He showed an entertaining video in which several subjects were blindfolded and given plain yogurt with chocolate syrup mixed in. However, they were told that the yogurt was strawberry. In all cases, the blindfolded subjects commented about the strawberry flavor they detected.

"We know from a lot of studies that you taste what you expect you're going to taste," said Wansink, director of the Cornell University Food & Brand Lab. "Anything we think we're going to taste, anything that biases our thoughts, positive or negative, almost always, irrefutably, affects the way we taste things."

He said the key is instilling habits in children. Some simple changes in lunchrooms paid dividends in healthier choices:

The Smarter Lunchroom Movement has a website that offers easy and low-cost ways for schools' food service personnel to encourage healthier eating. It offers a chart with the five basic objectives -- such as promoting more consumption of fruit, vegetables and targeted entrees -- and how food service workers can implement the goals in their cafeterias.

Sending nutritional report cards home to parents is another initiative of the Cornell University research is. "What we're finding when we use these nutrition report cards is that kids buy fewer cookies, they buy slightly more, probably 5 percent more, vegetables and they're more likely to drink white milk," he said.

James Hill, PhD, executive director of the Colorado Center for Health and Wellness, asked Wansink if his researchers have tried seeding expectations in the cafeteria by communicating that with this burrito, for example, you're going to taste certain things.

Wansink said his research has found that the basic labeling, such as "Big Bad Bean Burrito" has had the most mileage because as kids walk by they don't necessarily slow down to read more description. However, "we're trying something in junior highs right now where we're giving descriptions of the food."

Also speaking in the symposium was Timothy Church, MD, MPH, PhD, a professor of preventative medicine and director of the Laboratory of Preventative Medicine, Pennington Biomedical Research Center, Louisiana State University. He spoke on "Research Based Exercise Prescription: A Novel Concept?"

The symposium was co-sponsored by the Colorado Center for Health and Wellness and the Colorado Obesity Research Initiative.