Home News Joanne Posner Mayer pioneered use of fitball in USA. back to News 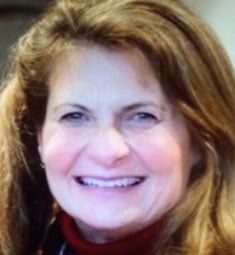 Four decades have passed since Joanne Posner-Mayer attended her fourth year of physical therapy (PT) classes in a classroom
at the 9th Street and Colorado Boulevard hospital.

Today, she marvels at the new facilities for the physical therapy program at the Anschutz Medical Campus, calling them "state of the art" and "spectacular."

But Posner-Mayer never forgot the training she received as a student, even as she built a successful business promoting Swiss Balls for therapy and fitness in the United States. She has endowed a PT scholarship and has committed to endowing a chair in the program.

"My whole adventurous, successful life revolved around being a physical therapist," she said. "It's a career that opens doors to whatever you imagine it can be."

"I was always interested in the body and how it works." 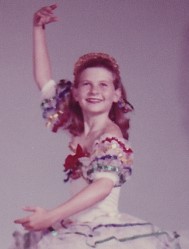 The daughter of immigrants (her mother was a Holocaust survivor), Posner-Mayer began dancing with the Colorado Ballet as a young child. By the time she turned 18 years old, she knew she did not want a future in ballet, but 13 years of dancing had introduced her to a new set of skills.

She was also passionate about skiing because she knew it was both a "dance on snow and a life sport."

"I liked different sports, and I liked moving," she said. "I could not have an office job. I couldn't be sitting all day."

When Posner-Mayer began college at CU-Boulder, she knew she wanted to graduate with a degree she could use. Physical therapy seemed like a perfect match for her active nature. Her training began with three years of undergraduate studies in Boulder, included a year in Spain, and culminated with her graduation from the program in 1973. Facing a tight job market in the United States, she decided to return to Europe, to the country where she thought she would find the best skiing—Switzerland. It was also a country trying new techniques in physical therapy.

Looking for a job, Posner-Mayer walked into the city hospital of Zurich, Triemlispital, and applied for a job as a physical therapist on the same day that someone had resigned. She was the right person in the right place at the right time, but she also had the right attitude. "You always have to be looking for opportunities," she said. 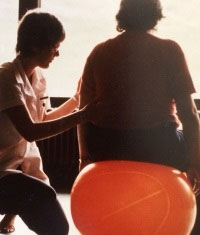 At this hospital, Posner-Mayer saw the "Swiss Ball" in action. Made in Italy, the large puncture-resistant PVC balls had been first used for medical purposes by Mary Quinton, a British physiotherapist working in Switzerland. Posner-Mayer had the opportunity to learn from Quinton, as well as from pioneering therapists Susanne Klein-Vogelbach and Maria Kucera. She remembers treating patients by having them sit on the ball and do exercises only two days after they had undergone major spine surgery.

"In the United States, those patients were in a body cast for six weeks," she said. "This was revolutionary."

She also learned how the Swiss were using the balls to help children with cerebral palsy and premature infants. By 1978, Posner-Mayer had taken what she had learned and moved to Cophenhagen, Denmark, where she introduced the Swiss Balls to therapists and patients in that country.

"I loved being a therapist."

But Posner-Mayer does not like to sit still (or stay in one place) very long. She decided it was time to leave the clinical setting, travel and meet new people. She interviewed with a medical supply company and walked out the same day with a new job as a sales representative and educational consultant. 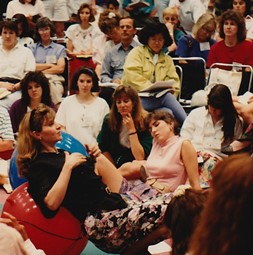 In her new position, she saw the opportunity for teaching classes in the use of Swiss Balls. She started ordering the balls from a company in New York and developed a reputation in her five-state sales region as a first-rate instructor with an inexpensive new tool to help patients. At one clinic in New Mexico, she sold all the balls she had brought with her and came home with orders for more.

"It occurred to me that I should quit my job and do this myself," Posner-Mayer said.

That is exactly what she did.

"I was marketing, selling, training, taking orders and shipping."

Today, Posner-Mayer sits on the board of the Jake Jabs Center for Entrepreneurship at the CU Denver Business School. In 1991, when she started her business, Ball Dynamics International, Inc., she was a typical entrepreneur, doing everything herself. "I had a basement full of balls, and I was marketing, selling, training, taking orders and shipping," she said. 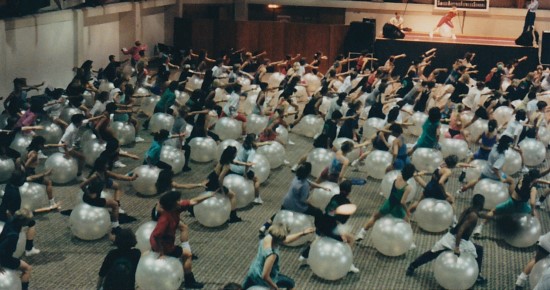 To market the balls, she made three videos, wrote a book and did national interviews, including ones published in The Wall Street Journal and Shape Magazine and traveled nationally and internationally teaching seminars. Initially, Posner-Mayer focused on training physical therapists, but increasingly innovative fitness instructors found their way to her classes. She started a second company—Fitball, Inc.—to transform ball exercises for worldwide fitness use in health clubs, gyms and sports training programs. Posner-Mayer's passion for the potential of Swiss Balls is still evident today, when she discusses how the balls transitioned from hospital therapy to health club training.

"You can buy all kinds of fitness equipment, but each machine only addresses one or two types of exercise," she said. "Working out on a ball changes your relationship with gravity. It takes away the pounding while always challenging your balance. It's great cross training for any sport."

"You give people hope, you come to make them better, you can see progress."

Posner-Mayer remembers her earliest days of physical therapy as "isolated." She likes the way the Anschutz Medical Campus has changed the nature of the physical therapy program. "Now, this program is integrated into the entire medical campus," she said. "It's interdisciplinary and so you meet pharmacy, nursing and medical students."

She praises the faculty of the PT program for their dedication and commitment. Their hard works pays off in the success of their students—99 percent of graduates pass the National Physical Therapy Exam on their first attempt to become licensed physical therapists.

Posner-Mayer is a devoted alumna of the Physical Therapy Program. She helped the alumni association in its infancy and later served as its president. She has always been a strong advocate for the program and remains committed to its development.

By funding the future of physical therapy, she is supporting the profession that has given so much to her because she believes in the work physical therapists do. "You give people hope, and you come to make them better. Working together, you can see their progress," Posner-Mayer said.