Home News Journey to space began at CU back to News

Kjell Lindgren, MD ’02, has wanted to be an astronaut as long as he can remember. That dream became a reality in July 2015 when he blasted off from Kazakhstan as part of NASA’s Expedition 44/Expedition 45 to the International Space Station (ISS). During his 141 day mission, Lindgren completed two space walks and conducted experiments in physics, life sciences and fuel combustion. 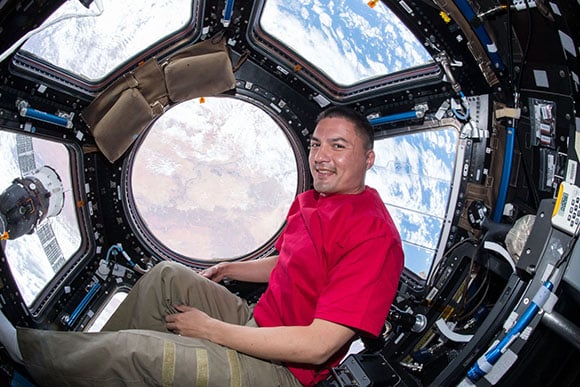 Alumnus Kjell Lindgren spent 141 days on the International Space Station, a mission that included two space walks and a variety of research. (Photo courtesy of NASA)

“That was one short amazing leg of a really extraordinary journey,” Lindgren told a group of students during a visit to CU Anschutz in March. ”I spent a good deal of my journey at CU. That journey took me to NASA for two and a half years of training to be an astronaut, with two years of mission specific training for this mission, and then to Kazakhstan for launch.”

Lindgren’s journey to space has been decades in the making. However becoming a doctor was not originally a part of his plan.

Fascinated with space, Lindgren had read “The Right Stuff” and Chuck Yeager’s biography—using those books to create a map he could use to become an astronaut. That map told him he needed to become a test pilot. At age 11 he sent off for materials to apply for the Air Force Academy. He never got a response, but that did not deter Lindgren from his dream.

Lindgren continued to follow his map. He was eventually accepted into the Air Force Academy and was awarded a pilot slot, which Lindgren deferred to study at Colorado State University. After returning for pilot training, Lindgren, who describes his journey in terms of peaks and valleys, was diagnosed with a medical condition that not only washed him out of pilot training, but also the Air Force. 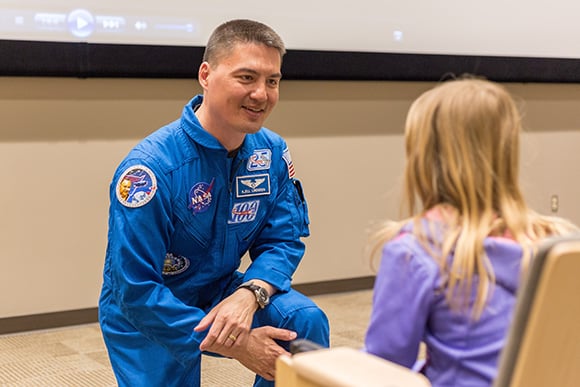 After his return to Earth, Lindgren met with students on the Anschutz Medical Campus to talk about his journey. He presented one attendee with a NASA patch.

“That was pretty significant valley,” Lindgren said. “I wallowed in that for a little bit, but then I reworked my map and began climbing out of that valley.”

Lindgren’s new map brought him to the University of Colorado, where he earned his MD in 2002.

“I had the great fortune to get study here at CU,” Lindgren said. “I am profoundly grateful to be back on the CU campus. This is where I did my medical training. It was a significant and very important part of my career. It feels like I am coming full circle to be back here today talking about this incredible journey.”

Lindgren spoke with students about his own experience at CU, recalling long nights memorizing the names of bones, muscles and nerves for Gross Anatomy. He and his peers would sit in a classroom with a skeleton going from top to bottom, over and over, naming everything until they had memorized it to perfection.

“Whatever you’re doing you have to be a nerd in it, so we became anatomy nerds,” Lindgren said. “You have to bring it.”

It was not just Lindgren’s incredible work ethic that saw him through his medical training. He also employed outside-the-box methods to succeed. To ensure he would do well on a test identifying anatomy of cadavers, Lindgren analyzed answers from tests given in previous years into a histogram and frequency distribution, allowing him to see the answers most frequently sought on exams.

The work yet again paid off. Lindgren’s unorthodox test preparation showed that the thoracic duct appeared on most of the practicals. During the test, when he saw a pin placed in an unknown area of the cadaver, he made the assumption that it must be the thoracic duct. He was right.

“Work hard and enjoy your life along the way,” Lindgren said. “I’m grateful for my path. Even though I slipped into several valleys I was always able to climb my way out.”

Lindgren went on to become board certified in emergency medicine and aerospace medicine, before he was selected by NASA in 2009 to become an astronaut. To become one of the nine selected for training, Lindgren rose to top of a pool of 3,565 initial applicants—of which only 113 received an interview and only 48 became finalists.

While Lindgren’s medical training helped him stand out among other applicants, his primary role during the mission was not as a physician. According to Lindgren, a physician is not always included on every flight as all astronauts are trained across all equipment, duties and responsibilities.

“Whether you are a test pilot, infectious disease researcher or a physician, we all get trained the same level on all of the equipment,” Lindgren said. “We can all repair equipment, do a spacewalk and respond to emergencies.”

Lindgren assisted in a variety of studies while aboard the ISS. Some of the research conducted included understanding how flames propagate and how fuel moves within a tank in space. He and his fellow astronauts also grew and ate lettuce—becoming the first astronauts to grow and consume a crop in space.

Perhaps the most significant moments for Lindgren were spent during his two spacewalks, each of which lasted more than seven hours.

[perfectpullquote align="full" cite="" link="" color="" class="" size=""]“The first time you stick your head out of the hatch and see the full face of the Earth spinning below you, occupying your whole field of view, it is an indescribable experience,” Lindgren said. You gain a profound understanding when you’re out in space that it is just your little space suit and miniature space ship that is protecting you from the harsh conditions. If you get in trouble, it is just you and your buddy to figure it out.”[/perfectpullquote]

Achieving his dream of becoming an astronaut has not left Lindgren without purpose. Since returning to Earth, he has been speaking with the public about his experiences in space and is looking forward to analyzing data from his experiments in space and helping to train the next group of astronauts. Lindgren is open to a return trip to the ISS, but in the meantime is enjoying discussing his journey.

“There is no one path to becoming an astronaut,” Lindgren said. “That’s demonstrated in my career. Find a place where you are passionate and work to get to the top of your field. If you study what you think NASA wants you to study and you don’t like it, you won’t succeed. Choose what you have a passion for.”