Mohammad Alshemali will graduate this month from the School of Dental Medicine as part of the Kuwait BS/DDS Program. He talks about why he finds dentistry so intriguing.

When Mohammad Alshemali witnessed a near-fatal accident as a teen in Kuwait, his decision to work in the healthcare field was solidified. He was playing soccer with his family, and his cousin ran into the road after a ball and was hit by a car.

It took the ambulance nearly 30 minutes to arrive, and Alshemali thought his cousin was going to die.

Luckily, after weeks in the ICU, his cousin made a full recovery. “After the accident, it just clicked in my mind the importance of the healthcare field and how you as a person can change other people’s lives. At that moment, I decided that this is the career I want to pursue.” Alshemali recalled.

Alshemali is set to graduate from the School of Dental Medicine this month.

Alshemali grew up in Kuwait with three sisters and one brother. “My brother is studying dentistry, and one sister is studying medicine,” he said. “My other sisters, one is an engineer, and the other is a senior in high school and thinking about going into medicine.” 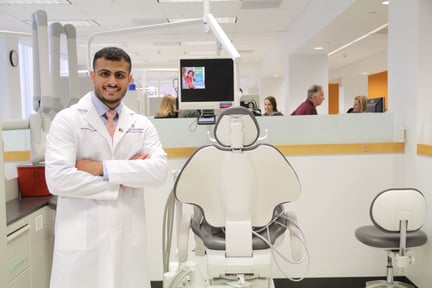 It was after high school when Alshemali received a scholarship to come to the United States for his undergraduate education and dental school.

He eventually opted for a dental track because of the creativity the profession permits. “It allows me to help patients as a healthcare provider and to draw smiles over their faces in a creative way,” he said. “When a patient comes to me, there are many things that I can do to address their chief complaint. I find myself more creative in dentistry.”

Alshemali was one of two students from Kuwait who chose to study in Colorado, first at the University of Colorado Denver and then at the CU Anschutz Medical Campus in the dental school, as part of the Kuwait BS/DDS Program.

Choosing to come to Colorado was difficult, as Alshemali knew no one in the state. He spent his first 10 months in the U.S. studying and perfecting his English.

Before starting dental school, he was leaning toward becoming an oral surgeon. But, inspired by Alan Sutton, DDS, MS, Alshemali is now considering prosthodontics, which involves the design, manufacture, and fitting of artificial replacements for teeth and other parts of the mouth.

“Before COVID, we used to have “Sutton Club,” in which we’d meet almost every Wednesday after class. We would discuss something related to the specialty or anything requested from the students,” Alshemali said of Sutton.

“He’s such a great mentor and hard worker. He’s available to help students at any time before and after class or clinic. Sometimes, he would stay at school until 8 p.m. for that club answering my questions.”

Alshemali is still debating between specializing in prosthodontics or oral and maxillofacial surgery (OMFS). After graduation, he will return to Kuwait for one year for General Practice Residency (GPR). He said he hopes to return to the U.S. for his residency.

“Diversity at school is one of the things I liked at CU. Meeting people from different backgrounds and making new friends from different places is always a great thing. At the same time, I met some people that have the same background as mine, which reminds me of those days I used to spend with my friends back home.” 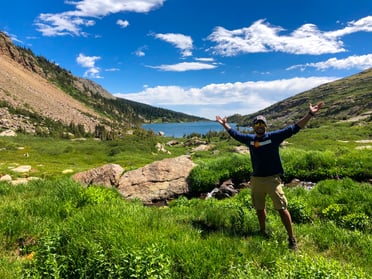 When he is not working or studying, Alshemali enjoys playing sports, traveling and hiking. “In Kuwait, there aren’t any mountains. When I came to Colorado, I tried hiking for the first time, and I loved it,” Alshemali said. One of his favorite hiking spots in Colorado is Hanging Lake near Glenwood Springs.