The COVID-19 pandemic had Ross Kedl literally climbing the walls.

In his home, the immunology professor has a rock wall in the basement that beckons whenever he and his son can’t get to the gym or favorite outdoor spots. So when an opportunity arrived in Kedl’s email inbox to help a Colorado company in its efforts to reopen thousands of now-closed climbing gyms, he grabbed hold of the project.

In a Colorado-centric collaboration, Kedl, professor of immunology and microbiology at the University of Colorado School of Medicine, and two CU Anschutz Medical Campus colleagues ran an experiment whose outcome has significant health, economic and recreational implications.

“Their primary concern was that they wanted to open the gyms again, because they’re climbers,” Kedl said of the company employees. “First and foremost, they just wanted to start climbing again.”

Serendipity, much like a perfect handhold that appears midway through the crux, brought the company and the professors together.

When the pandemic began its spread, Denver-based Friction Labs, one of the only companies that manufactures a liquid chalk in the United States, experimented with creating a version dubbed “Secret Stuff”. It contained 80% ethanol – similar to the Food and Drug Administration (FDA)-approved hand sanitizers on the market.

However, per FDA guidelines, the company couldn’t describe the liquid as “hand sanitizer,” mainly due to compounds (e.g. chalk) that are outside the spectrum of what’s normally in a sanitizer. Friction Labs’ tests found that the product performed well, staying on a user’s hand longer than any other chalk the company had created.

Friction Labs sent an email to its thousands of devoted customers – including Kedl and New York graduate student Anthony Antonelli – informing them of this new, hygienic product. Asking if there were data showing “Secret Stuff” to be antiviral, Antonelli was told by the company that the process was expensive and lengthy – it could take over six months to get results. 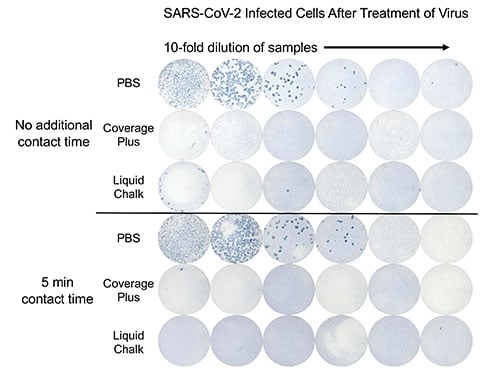 the recoverable coronavirus. ‘Coverage Plus’ is a laboratory disinfectant. PBS is the untreated sample.

So Antonelli contacted Joe Sun, professor of immunology at New York’s Memorial Sloan Kettering who had months ago visited Kedl and other colleagues at CU Anschutz. Sun then reached out to Kedl.

“What (Friction Labs) really wanted to know, of course, is whether it destroyed coronavirus on surfaces,” Kedl said. “It just so happens that Tem Morrison (professor of immunology and microbiology at the CU School of Medicine), one floor up, has been growing it in the lab.”

After Kevin Brown, Friction Labs’ co-founder, sent samples of the Secret Stuff to the professors – including Michael Schurr, associate professor of immunology and microbiology at the CU School of Medicine – the team happily got to work.

‘Exciting’ results in the lab

Typically, faculty hands off laboratory work to graduate students and post-docs. Not this time. “This is one where all of us professors got to get back in the lab and swab hands and take out plates and grow stuff,” Kedl said. “It was very exciting.”

The antibacterial activity of Secret Stuff was tested using petri dishes. Half of the petri dish contained smears from untreated hands, where bacteria grew in robust colonies. On the other half, swabs from hands treated with Secret Stuff didn’t grow any microorganisms. In fact, the Secret Stuff was as good or better than using hand sanitizer, used as a positive control on separate plates.

A similar experiment was done to evaluate the anti-viral activity of Secret Stuff. Instead of using hands, lab-grown SARS-CoV-2 was spotted on a plastic surface which was then recovered and grown in a dish of cells to see how much virus was recovered. Virus on surfaces was also treated with either Secret Stuff or a laboratory disinfectant. Just like with the bacteria from lab hands without any treatment, virus was readily recovered from the plastic surface. Also just like the bacteria, after five minutes of contact time, the Secret Stuff eliminated recoverable virus – performing just as well as the disinfectant.

“We’ve got the data that show (Secret Stuff) is robustly antimicrobial and antiviral,” Kedl said. “It ended up being a fun thing – a Colorado company needed some help, and we’ve got Colorado researchers who can do it and are climbers. It was just kind of ‘everybody all in’ on making sure that this works out.”

Brown noted that Secret Stuff is already available at over 200 climbing gyms and over 200 CrossFit centers in 27 countries.

He added that in New York alone, there are over 3,000 gyms still closed due to the pandemic. “This is the type of product that could help gyms open safely,” Brown said. “You put your face mask on and use our liquid chalk. Between those two things – as long as you’re not coming in sick – we should all be able to get back to the gyms and get back to working out.”

That’s good news to Kedl, who looks forward to no longer being “trapped on my home wall” in the basement.