Home News Living with Treacher Collins syndrome back to News

Researchers frequently speak about their studies of diseases and the positive influences their work has had in their field. But few can talk about experiencing a disease they explore firsthand.

Francis Joel Smith, PhD, a research fellow at the University of Colorado School of Dental Medicine, is the exception. Born with a rare genetic disorder called Treacher Collins syndrome, Smith shared his story of living with and studying the disease as part of a seminar series presented by the CU School of Medicine Modern Human Anatomy program.

Smith, who has a severe case of the disorder that affects about one in 50,000 people, explained how the craniofacial disease can lead to substantial deformities to his audience of about 30 in the Education 2 building. “There is a mass death of cranial neural crest cells,” he said. “These cells are what give way to the cartilage and bones in the face. If these cells are missing, you can imagine that this will be really detrimental to the development of prominent facial features, such as cheek bones and the chin.” 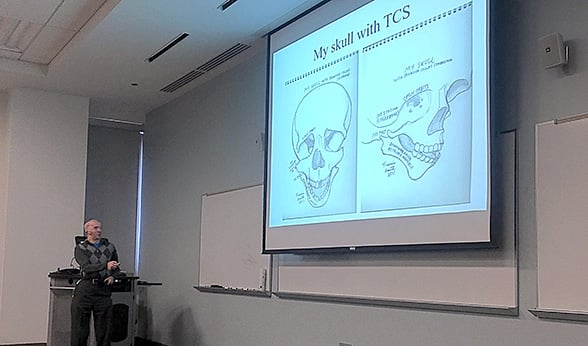 Smith shows his detailed drawings about his physical changes from Treacher Collins syndrome.

Smith was born unable to breathe, requiring an emergency tracheotomy. He was also born without ears, ear canals, and middle ear cavities, resulting in deafness. He had many types of bulky hearing aids throughout his life and was severely teased in school. Most recently, he received a “bone-anchored hearing aid,” which is a titanium screw with a small sound processor.

“It works like a violin or a guitar,” said Smith. “With this device, my brain can now perceive sounds, and I can hear.”

He also has many dental issues, including a very small, underdeveloped mouth.  “My dentist most recently told me that I have a child’s mouth full of adult teeth,” Smith said. “This includes an oversized tongue, which can block my airway. As you can imagine, this makes eating and breathing very difficult.”

He recounted his 20-plus surgeries, including total jaw, eye socket and outer-ear reconstruction. Though his experiences were challenging, Smith eventually developed a positive attitude, hoping to influence other people with the disease through his actions.

“Through all the surgeries, I’ve had many metal implants,” he said. “I’m very much put together like a bionic man.”

Smith doesn’t let the hardships of Treacher Collins syndrome control his life, and he uses his research and experiences for public outreach and advocacy. “I want to provide the support that I didn’t have.”

“It’s super inspiring to see him set aside his negative experiences to focus on others who are affected by Treacher Collins syndrome." – Athena Clemens, first-year student in Modern Anatomy

From Australia to Brazil and the United Kingdom to Denver, Smith has traveled the world to spread awareness of Treacher Collins syndrome.

“I’ve learned about this genetic disease in class,” said Athena Clemens, a first-year student in the Modern Anatomy program. “It’s super inspiring to see him set aside his negative experiences to focus on others who are affected by Treacher Collins syndrome."

Aside from presenting at seminars, Smith creates intricate sketches that capture the physical anomalies associated with Treacher Collins syndrome. He also wrote the forward to a special edition of the book “Wonder,” which was recently adapted into a movie. He will speak at a sold-out CU special screening of “Wonder” at a movie theater in Denver tonight.

Smith used his disability to fuel his desire to learn, garnering extensive knowledge of his disease and seeking to pinpoint its exact cause.

While completing his PhD at the University of California, San Francisco, he found that low-oxygen conditions can result in altered craniofacial properties, such as those observed with his disease. This led to his first postdoctoral position in 3-D imaging and morphometrics, the process of measuring shapes and dimensions of living organisms.

Smith is completing his second postdoctoral position on the CU Anschutz Medical Campus, concentrating his research on craniofacial studies.

“I’ve studied many aspects of Treacher Collins syndrome at this point,” said Smith. “I want to further consider the genetics and morphometry of this disease. I’m looking forward to continuing outreach while advancing my studies.”