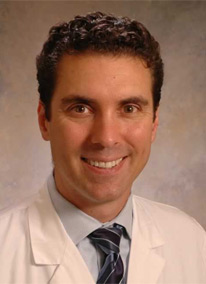 Different kinds of lung cancer behave in different ways, suggesting they are fundamentally different diseases. According to a University of Colorado Cancer Center study published in Cancer, the official journal of the American Cancer Society, different subgroups of non-small cell lung cancer (NSCLC) show distinct patterns of spread in the body.

ALK positive lung cancer was strongly associated with cancers that spread to the linings around the heart and lungs (pericardial and pleural disease). Patients with ALK positive NSCLC were also predisposed to develop liver metastases as were those with an EGFR mutation when the different subgroups were compared.

"In the last few years we have been able to separate lung cancer into different molecular subtypes to help improve outcomes from specific targeted therapies. This study really confirms that these molecular subtypes are manifesting as different diseases in patients," said Robert Doebele, MD, PhD, lead author of the study and CU Cancer Center investigator.

Another University of Colorado study published in the same edition of Cancer drills down on how some of these different molecular subtypes of lung cancer are detected in the first place. Specifically, the study examined the companion diagnostic test for detecting the ALK positive lung cancer cases, called a fluorescence in situ hybridization (FISH) test. This test is used to select patients for treatment with crizotinib, an ALK inhibitor drug. Now University of Colorado researchers have solved an unanswered question as to why patients who respond to crizotinib only appear to have the ALK change in a fraction of the cells in their cancers.

By looking in detail at the genetic changes present in the cancer cells they came to two major conclusions. First- cell counts below 100 percent in ALK positive tumors reflect the fact the assay misses a proportion of cells and not that the cells are truly missing the ALK change.

Second, the ALK change happens early in the development of the cancer and is likely to be a fundamental driver of the cancer's growth. The study was conducted by D. Ross Camidge, MD, PhD, the director of the lung cancer clinical program at the CU Cancer Center and University of Colorado Hospital and Marileila Varella Garcia, PhD, professor of medicine, medical oncology and pathology at University of Colorado School of Medicine.

"Knowing that ALK changes are driving the cancer and that they are not actually missing from a significant proportion of the cancer reinforces our understanding of ALK positive lung cancer. It now makes sense why targeting these changes is going to affect a very large proportion of the tumor and explains the dramatic clinical responses seen with crizotinib. In order to treat any disease successfully, you have to know what you are really treating," said Camidge. "It is only by understanding lung cancer better that we can hope to improve outcomes in the long term."

Both studies were funded by the University of Colorado Lung Specialized Program of Research Excellence.

The CU Cancer Center's Thoracic Oncology Program is world renowned for its pioneering treatment of lung cancer. The program includes a multidisciplinary team of specialists and subspecialists working together to establish the best treatment plan for each patient. Advanced molecular profiling of a patient's tumor, combined with an extensive array of standard and experimental treatments available through clinical trials has lead to major advances in patient outcomes in the last few years. The program's one-year survival rates for advanced lung cancer consistently run twice as high as the national average. The survival rates at five years run four times higher than the national average.

CU Cancer Center is the lead site for the national Lung Cancer Mutation Consortium, the collaboration of 14 of the nation's elite lung cancer programs. The consortium is profiling 10 different molecular abnormalities in lung cancer and pairing them with specific experimental treatments over the next few years.

Please consider supporting the Lung Cancer Colorado Fund. This unique fund is overseen by the physicians and scientists and supports all aspects of the Center's and University of Colorado Hospital's combined fight against lung cancer.

For an appointment with a University of Colorado physician, please call Bethie Jean-Philippe, intake coordinator for the lung cancer program at 720-848-3386 or email bethie.jeanphilippe@uch.edu.