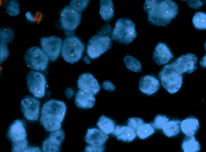 A drug that targets a specific type of lung cancer shows a dramatic response in more than half of the people who take it. The drug, called crizotinib, has been in clinical trials since 2006, and the results from the largest group of patients to take it within the first of these clinical trials are being presented at the annual meeting of the American Society of Clinical Oncology (ASCO).

The patients taking crizotinib have anaplastic lymphoma kinase (ALK) positive advanced non-small cell lung cancer (NSCLC) and the drug targets the gene that drives this particular kind of cancer. In 119 patients, crizotinib produces some degree of shrinkage in the tumors of the majority of patients with dramatic responses in more than 60 percent of cases. The responses last approximately 48 weeks.

D. Ross Camidge, MD, PhD, the director of the lung cancer clinical program at University of Colorado Hospital (UCH) and the University of Colorado Cancer Center, will be presenting the latest results from the crizotinib trial at ASCO. “The strength of crizotinib in ALK positive lung cancer was apparent when less than 20 patients were taking part in the trial. The benefit of targeting this kind of cancer with this particular drug has only been confirmed as more patients enrolled in the trial,” said Camidge. “This demonstrates the efficacy of new drugs can be reliably revealed even among small groups of patients when the cancers being tested are molecularly uniform.”

Camidge believes the results being seen with crizotinib open the door to a new way of thinking when it comes to cancer treatment. “We need to continue testing drugs in molecularly defined populations to find out early whether they can be effective. When we try and give targeted drugs to everyone, knowing that cancers are so different between individuals, we run the risk of missing real breakthroughs that only apply to subgroups. You don’t have to know definitively what the magic marker for who responds to a particular drug is when you start – but you can test a series of hypotheses by prescreening patients and really focus on the development of drugs on the right group as early as possible.”

Lung cancer is the leading cause of cancer deaths in the United States. Camidge said it is crucial for anyone diagnosed to get their lung tumor tested for ALK and an increasing list of other molecular markers. The University of Colorado helped to develop several of these tests that now reveal that lung cancer is actually several different diseases at the molecular level. Each one may need a different type of treatment.

Pfizer is the sponsor of the crizotinib clinical trials.

The University of Colorado’s Thoracic Oncology Program is world renowned for its leading edge treatment of lung cancer. The program includes a multidisciplinary team of specialists and subspecialists working together to establish the best treatment plan for each patient. Advanced molecular profiling of a patient’s tumor, combined with an extensive array of standard and experimental treatments available through clinical trials has lead to major advances in patient outcomes in the last few years. The program’s one-year survival rates for advanced lung cancer consistently run twice as high as the national average. The survival rates at five years run four times higher than the national average.

University of Colorado is the lead site for the national Lung Cancer Mutation Consortium, the collaboration of 14 of the nation’s elite lung cancer programs. The consortium is profiling ten different molecular abnormalities in lung cancer and pairing them with specific experimental treatments over the next few years. For an appointment with a University of Colorado physician, please call Bethie Jean-Philippe, intake coordinator for the lung cancer program at 720-848-3386 or email bethie.jeanphilippe@uch.edu.

University of Colorado Hospital (UCH) is the Rocky Mountain region's leading academic medical center. It is ranked among the top 10 academic medical centers in the United States by the University HealthSystem Consortium  and is ranked as the best hospital in the Denver metro area and one of the best in the country by U.S. News & World Report. UCH is best known as an innovator in patient care and often as one of the first hospitals to bring new medicine to patients’ bedsides. The hospital’s physicians are affiliated with the University of Colorado School of Medicine, part of the University of Colorado system. Based on the expansive Anschutz Medical Campus in Aurora, Colo., the hospital is a central part of one of the country’s only true “Health Care Cities” where patient care, research and education converge to establish the future of health care delivery.