Philip Owens, an Army veteran-turned-scientist, believes the sideways glances that accompany his month-long mustache are a small sacrifice to raise money and awareness for men’s health issues.

For the month of November, Owens, PhD, an assistant professor in the Department of Pathology in the University of Colorado School of Medicine, is participating in the global fundraising campaign known as Movember. The Movember Foundation, whose slogan is “Changing the face of men’s health”, uses fashionably-unfashionable facial hair practices to start conversations around screening and treatment for prostate cancer, testicular cancer, mental health and suicide prevention. Owens belongs to the University of Colorado Cancer Center Movember Team, whose fundraising team of physicians and researchers raised over $9,000 in 2017.

Around Owens’ lab, the scruffy ’stache has elicited a bevy of amused responses. Meredith Provera, a professional research associate in the lab, says it was difficult to sustain serious dialogue after the facial hair appeared. “It was so hard to talk science,” she laughs.

As for his family: “My wife hates it,” Owens claims, “and my kids think it’s terrible.” 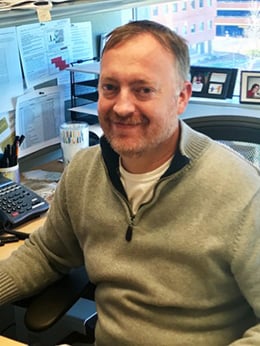 Owens has received some guff from colleagues and his family about his scruffy facial hair this month.

Owens’ passion for men’s health started when he joined the Washington Army National Guard 10 days after his 18th birthday. Serving eight years as a medic in the 164th MASH (Mobile Army Surgical Hospital) and 6250th U.S Army Hospital, Owens left his military career with a sense of gratitude and wanting to repay soldiers’ sacrifices. As an early-career scientist at Vanderbilt University, Owens was inspired to participate in Movember by Bob Matusik, PhD, a tireless patient advocate and champion for research.

In 2017, Owens accepted an assistant professorship at the CU Anschutz Medical Campus and moved his passion for men’s health, along with his wife and three kids, west to Colorado.

Currently funded through the U.S. Department of Veterans Affairs with a Career Development award, Owens studies the metastasis of prostate cancer to bone. The lack of good treatment options for metastatic prostate cancer is personal to Owens, as veterans experience higher rates of aggressive cancer compared to the general population. Owens explains that bone metastases are relatively slow-growing yet can be extremely painful, resulting in very poor quality of life for patients for several years. “Survival per se is not the only problem,” Owens clarifies. “Another problem is pain.”

Owens’ lab studies the role of bone morphogenetic proteins (BMP) in bone metastasis. These proteins drive bone development in healthy individuals but get hijacked by prostate cancer cells. Because prostate cancer patients with bone metastases are of advanced age, recovery following a bone fracture is generally quite poor. “We need to gauge each patient for fracture risk and develop a treatment plan accordingly,” Owens says.

How can mustaches jump-start conversations about men’s health? As men are generally less comfortable discussing and seeking preventative medical care, communicating with men about health concerns is uniquely challenging and requires a specialized approach, Owens says. “The best part is the mustache, right? Let’s be honest.”

‘We should all strive to die of something stupid, like a whiskey-fueled hot air balloon race against your 93-year-old best friend.’ – Philip Owens

He explains that his mustache is an automatic conversation starter and gives people a direct way to ask questions, get involved and contribute. As a fundraiser and cancer researcher, Owens appreciates the financial transparency of Movember. “It’s very obvious that the charity is using donations toward its stated mission,” he explains.

Indeed, the Movember Foundation, started in 2003, is active in over 20 countries and globally raised $67.5 million in 2017. The foundation boasts 76.1 percent of funds raised are used to fund men’s health programs, over 1,200 to date. Examples of organizations which have received Movember funding include the LIVESTRONG Foundation, the Prostate Cancer Foundation and the Prevention Institute.

Owens typically shaves his usual beard on Halloween night; however, this year he was slated to give a talk to Cancer Biology faculty and students on Nov. 1, so he waited an extra day. “I didn’t want to distract from the science,” he says.

When asked what drives his commitment to improving treatment options for prostate cancer patients, specifically veterans, Owens says, “As a patient, if you survive beyond the primary diagnosis, not a day goes by that you aren’t waiting for the relapse.” He adds that the human experience should not end with a cancer diagnosis, but rather, “We should all strive to die of something stupid, like a whiskey-fueled hot air balloon race against your 93-year-old best friend.”

Guest contributor: This story was written by Shawna Matthews, a postdoc at CU Anschutz.