For more information about the dangers of fentanyl and other opioids, as well as where to find support and resources, please read the recent CU Anschutz leadership statement about the fentanyl crisis.

Sgt. Corey Childers remembers when the pocket-sized nasal pumps – new devices to take on patrol – arrived at the University of Colorado Anschutz Police Department. It was late 2016, and the nation was reeling from a brutal wave of overdoses in the growing opioid epidemic.

“We were trained then, when all the overdoses really started to take off,” Childers said. “It was a brand-new program at the time.”

Just a couple months later, he put the new gear to work. In February 2017, Childers and Police Officer Jeffrey Langford responded to a call from a security officer at UCHealth University of Colorado Hospital. The officer reported a mid-30s male who appeared to be passed out in a vehicle outside the Emergency Department.

“He was breathing and had a pulse, but other than that was totally unresponsive,” Childers said. Aluminum foil covered part of the dashboard, and a couple needles were scattered on top.

“Officer Langford pulled out his Narcan® (Brand name of naloxone) and suggested we use it. I sprayed it into each of his nostrils, and within two or three minutes – about the same time the paramedics arrived – he started to come around and was trying to talk to us. He wasn’t really making sense. The Narcan® worked pretty quickly – the way it’s supposed to.”

The officers found a small amount of what appeared to be an illicit substance in the vehicle, Childers said, but a fentanyl test wasn’t readily available at the time. “Everything we tested it for was negative,” he said, “… and based on the very small amount he had left and the circumstances, we didn’t charge him. He was transported to the emergency room for care.”

Almost 400,000 Americans died from opioid overdose from 1999 to 2017, according to the Centers for Disease Control and Prevention (CDC). Currently, over 150 people die every day from overdoses related to synthetic opioids such as fentanyl. In Colorado, of the almost 1,700 drug overdose deaths last year, nearly 50% involved fentanyl, a 37% increase from the previous year.

According to the CDC, a recent study found that bystanders were present in more than one in three overdoses involving opioids, underscoring the importance of pre-filled pumps such as naloxone sprays. Administering naloxone is not a substitute for immediate medical care in the event of an opioid overdose, so it’s imperative that 911 also be called in any emergency.

As part of the training in 2016, the CU Anschutz officers learned that the naloxone spray will not harm someone who is suffering from a non-opioid overdose or a different illness. “It doesn’t hurt to try it even if you’re not sure what their condition may be,” Childers said.

Since that incident, CU Anschutz police haven’t responded to any other potential opioid overdoses. However, at first-responder training sessions, Childers said, he hears about the prevalence of the problem statewide. “Everybody has stories about people overdosing and how bad it is in their jurisdiction,” he said. “It’s definitely still quite prevalent, unfortunately.”

CU Anschutz police train annually on the proper use of Narcan® and how to spot the symptoms of a drug overdose, Childers said. “We just got a new batch in because the doses expire. Every officer has at least two doses that they have with them all the time.” 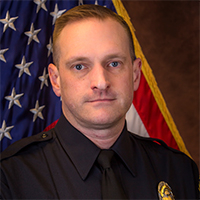