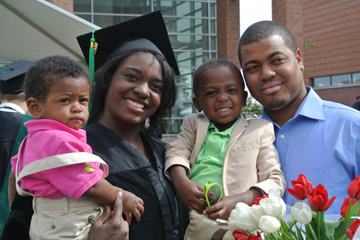 Speaker after speaker rose to remind them of their accomplishments, the nobility of their calling and the challenges that lie ahead.

“We are looking to you to be the vanguard of health care reform in this country,” said Lilly Marks, vice-chancellor for health affairs at the University of Colorado and executive vice-chancellor, Anschutz Medical Campus. “We hope your experiences here will serve you well as you pursue your dreams.”

University of Colorado Denver Chancellor, Don Elliman, urged them to “reflect on their accomplishments.” And CU President Bruce Benson told the crowd that a “degree from this great university will change your life forever.”

Then he issued some advice for future success.

“Listen to all sides of every issue. You accomplish more if you don’t require all the credit. Seize opportunities. Know what you don’t know. Do the right thing no matter how tough and you will be rewarded,” he said. “And the harder you work, the luckier you will get.”

Benson then noted the importance in these lean budgetary times of being “generous alumni.”

After handing out awards and medals to individuals for outstanding contributions to the university and various health care disciplines, Michael Carrigan, chairman of the CU Board of Regents, read the Norlin Charge.

The charge comes from a 1935 baccalaureate address from former CU President George Norlin, best known as a voice for equality and humanity at a time when some were demanding he rid the university of Catholics and Jews. He refused.

“I bid you farewell only in the sense that I pray you may fare well,” he said. “You go forth, but not from us. We remain, but not severed from you. God go with you and be with you and us.”

With that the graduates in their black robes and caps came forth for their diplomas, each one bearing their own story, their own journey.

“I feel fantastic,” declared Courtney Hutmacher, 28, who earned her doctor of physical therapy degree. “I didn’t know if I’d even get here. The road has been long, but it was worth it. I’m glad I did it.”

Few had a longer, more winding road than Erin Schnake who also earned degree in physical therapy. The 36-year-old, who is 9-months pregnant, posed for pictures with her family.

“It’s taken me nine years to get here,” she said, surrounded by her beaming husband, parents and 6-year-old daughter. “It’s been very difficult going to school, being a mom and being pregnant but I don’t regret any of it.”

Her father Dennis Schriner of Lafayette, IN, stood nearby.

“Can you see how swelled with pride I am right now?” he asked.

Her husband Michael Schnake wrapped an arm around her.

“She’s worked so hard. She has earned every bit of this,” he said. “In fact, she inspired me. I’m following in her footsteps and going back to school to become a nurse.”

A few yards away, Kate Goldberg, 26, ambled across the grass. Earlier that morning, she had accepted the diploma on behalf of graduates from the School of Dental Medicine.

“I am very excited,” she said. “Now I’m now going to do a residency in dentistry at UCLA.”

Mark Goldberg, her father and a doctor from Indianapolis, wasn’t surprised.

“My daughter has always been a very serious student and a very hard worker,” he said. “I am extremely proud of what she’s done.”