After years of teaching abroad and working with organizations like the United Nations and Doctors Without Borders, Tony Bolaños felt professionally fulfilled but personally frustrated.

Medicine, he thought, was all about healing patients yet he was seeing very few.

Then he heard about the Center for Human Development (CHD) operated by the Center for Global Health at the Colorado School of Public Health and Children’s Hospital Colorado on a banana plantation in rural Guatemala. Bolaños was working at a hospital in nearby Coatepeque so he came out for a look.

“I happened to find Dr. Edwin Asturias from the Center for Global Health there and we began talking about the project,” said Bolaños during a recent visit to the center which supervises the CHD. “He asked what I was interested in doing and I said I wanted to see patients.” 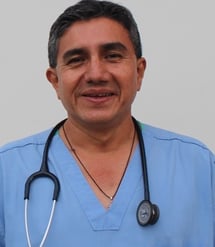 Tony Bolaños is the new director of the Center for Human Development in Guatemala.

Not long after, Bolaños was hired as the CHD’s new director and is seeing more patients than he ever imagined.

In fact, thanks to his outreach efforts in the villages surrounding the plantation, the number of CHD patients have spiked from about 50 a month to a high of 354.

“I went personally to the health outposts and met with the leaders of the villages to let them know that we are here and we are ready to help them,” said 47-year-old Bolaños.

The Center for Human Development began three years ago with a $1 million donation from the Bolaños Foundation, run by Fernando and Gustavo Bolaños, owners of AgroAmerica, a major banana grower in Guatemala. The brothers were committed to providing health care to their 3,000 workers and their families.

The money along with funding from Children’s Hospital Colorado, allowed the Center for Global Health to assemble a modern, well-equipped clinic with medical professionals from a variety of disciplines working to bring quality health care to some of the poorest people on earth. The building itself was partly designed by CU Denver architectural students.

Hundreds of local residents poured in to see the grand opening of the CHD in April 2014.

As partnerships go, the CHD is highly innovative – a host country, a private business, an American hospital and a university coming together to better the lives of an entire community.

Yet the challenges are staggering.

Couple all of this with extreme poverty and a paucity of health services and you have one of the most daunting public health challenges in the world.

“If it was easy we wouldn’t need to be there,” said Stephen Berman, MD, director of the Center for Global Health. “Some of the biggest challenges are the most basic – clean water, good education, proper hygiene.”

The CHD sits in the Trifinio region of Guatemala, one of the poorest areas of the country.

AgroAmerica built the center, he said, but CU Anschutz and Children’s Hospital are there to ensure the highest quality health care.

“If you look back when we started with an open field and see what we’ve accomplished, it’s really quite impressive,” Berman said. “We have a building, a laboratory, equipment, training programs and now we are building housing for visiting doctors and nurses from CU Anschutz.”

As of September 2015, 18 pediatric residents have rotated through the clinic and during the 2015-16 academic year, 19 other residents have chosen to take part. CU Anschutz public health students and dentists along with family medicine, internal medicine and obstetrics and gynecology residents have also participated.  A new birthing center is slated to open in February.

As the center has grown, so has its mandate. It no longer just services banana farm workers. Now it provides care for the roughly 23,000 people in the villages around the farm with sometimes dramatic results. 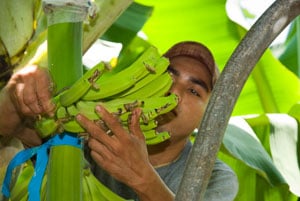 The CHD is on the Banasa banana farm in southwest Guatemala. It serves the workers, their families and those in neighboring villages.

Children who once died from treatable illnesses like diarrhea, or women suffering from complicated pregnancies now have a chance they never had before. Bolaños and his colleagues from CU Anschutz and Children’s can make a prompt diagnosis and treat the patients themselves or dispatch them to another hospital before it’s too late.

“The Center for Human Development has entered a new and exciting phase and Tony is a part of that,” said Dr. Asturias, director of Latin American Projects at the Center for Global Health. “We have been officially open for close to two years now and are now seeing pediatric, internal medicine, family medicine and obstetrics residents coming down to get formal training in global health.”

Asturias, a pediatrician instrumental in helping win the initial million dollar donation for the center, said Bolaños is not only from the area but is also a well-respected leader in health care education and health system coordination.

“He has dedicated himself to training our residents and has been successful in engaging the community,” Asturias said. “He is part of our effort to expand the reach of the CHD to the surrounding communities and beyond.” 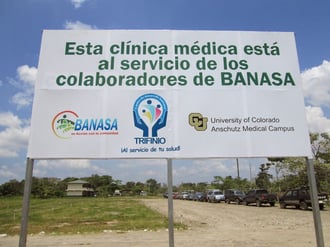 The Center for Human Development in Guatemala is a collaboration between the Center for Global Health, part of the Colorado School of Public Health, Children's Hospital Colorado and AgroAmerica.

Bolaños, no relation to the AgroAmerica directors, attended medical school in Guatemala City before working for Doctors Without Borders in northern Guatemala. He focused primarily on the spread of HIV. Later, he studied tropical medicine in Madrid where he was also a professor.

Bolaños eventually went to work for the UN’s Population Fund and taught epidemiology in Coatepeque, about 50 miles from the CHD.

coordinating with the hospital in Coatepeque to make transferring patients easier. 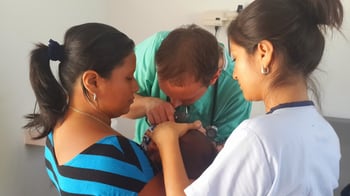 Dr. Jacob Mark treats a patient at the CHD.

At the same time, Bolaños is building support for the CHD in the local villages.

“It’s important to give them the correct information,” he said. “It’s frustrating when you hear rumors that are simply not true. And some residents are surprised to find that the services are not free.”

Banana workers pay about $2 per clinic visit while local residents pay roughly $3.50. The cost of getting to the hospital in Coatepeque and seeing a doctor can exceed $20 or more, a sizeable expense in such a poor region.

Despite the challenges, Bolaños finds the work invigorating.

“I love it. It’s a great feeling to be able to provide help to the people who need it most,” he said. “But it’s also sad sometimes.”

Like when he finds himself battling against traditional beliefs that can doom a patient.

“We had a 13-year-old come in very pale with what looked like renal failure,” he recalled. “The mother didn’t take the child to a doctor because a local pastor said the disease was evil and needed to be cast out. The child died a week later.” 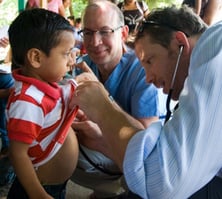 In other cases, the clinic has saved lives.

That happened recently when CHD nurses, who track pregnant women in the community, visited a mother the day after she gave birth. The baby was gravely ill, vomiting blood and refusing to eat. The health care workers swiftly brought the infant to the clinic and gave it an IV and other treatment.

“We thought she might have neo-natal sepsis,” Bolaños said. “We talked to the hospital resident and they said `Send her to us.’’’

After a week of intense antibiotic therapy, the baby was saved.

“That post-partum visit from our center saved her life,” Bolaños said. “And that’s why I love doing this.”