Home / News / Once a troubled teen, now a physician in training

William Mundo called it a “miracle” that he graduated from high school in 2012. Now the aspiring physician is graduating with his master’s degree in public health from the Colorado School of Public Health (ColoSPH).

“I almost dropped out of high school,” said Mundo, who also earned a bachelor’s degree in public health and ethnic studies from the CU Denver College of Liberal Arts and Sciences. “No one was expecting me to graduate.”

Now, the once-at-risk student is enrolled in the CU School of Medicine for the fall.

The son of Mexican immigrants, Mundo was born in Los Angeles and moved with his family to Leadville, Colo., when he was 6 years old.

No one in my family had gone to college.”

He remembers, as a child, watching visitors arrive at his house to see his father. They came with sicknesses and injuries. They came to be healed.

Mundo thought his father was a doctor, and he wanted to follow in his footsteps.

“When I got older, I discovered that no one in my family had gone to college,” Mundo said. “My father didn’t have his medical doctorate. He’d dropped out of school in the sixth grade.”

But, Mundo learned, his father was a curandero, a community healer who provided traditional, indigenous forms of treatment. He decided he wanted to heal people, too.

When Mundo was 16, his father left the United States. He returned to his hometown in southern Mexico to take care of his own ailing father.

Mundo didn’t know if he would ever see his father again. He fell into despair and began getting into trouble. He was on the verge of dropping out of school when a mentor reached out to get him back on track – and took him to visit CU Denver.

The mentor knew of Mundo’s interest in health care and thought CU Denver would be a welcoming environment for him and – with its relationship to CU Anschutz – would help him on the path to med school.

“He was 100 percent right,” Mundo said. “From the moment I stepped foot on campus, I knew this was where I wanted to go.”

With his mentor’s support, Mundo applied to CU Denver and was accepted. He called his father in Mexico to share the good news. His father was proud of him and said he was making plans to come back to the United States and see him succeed in college.

But during Mundo’s very first week of college, his father passed away in Mexico.

“My father couldn’t come back to support me in my journey,” he said. “That solidified my motivation to honor his legacy as a healer.”

A pathway to success 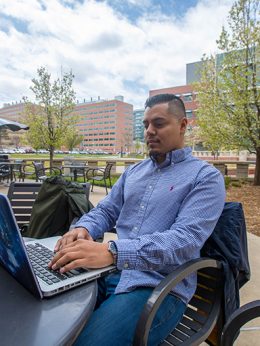 A standout student at CU Denver, Mundo struggled a bit to find his way in the beginning.

“Being a first-gen student, I didn’t know what I was getting myself into,” he said. “I started as a pre-med biology major, but as I took more public health classes, I saw how it applied to my life and what I’d seen growing up in an underserved town.”

Leveraging a full-tuition scholarship from the university, Mundo completed his undergraduate education in 2016 – debt-free in spite of the fact that his family was not able to help support his education financially.

From there, he went straight to a master’s program at ColoSPH, where he studied Global Health Systems, Management and Policy.

“As I studied public health, I saw applications to my own identity and cultural heritage and opportunities to promote health equity and social justice,” he said. He graduates May 25 at the CU Anschutz Spring Commencement 2018.

“It’s been a very rewarding pathway,” said Mundo, who received both the Judith Albino Diversity Scholarship and the Hoffman Public Health Scholarship. “The university has provided me this opportunity to get an education and make history in my family and my community.”

And his pathway through the university won’t end there. Though he received offers from med schools across the country, Mundo chose the CU School of Medicine.

“It’s an excellent school,” he said. “I bleed black and gold.”

He has big dreams for helping not just his own but communities around the world.

“After I get my MD, I hope to be able to work with rural and Indigenous people around the world to preserve their culture and their health,” he said. “Then, I want to open my own clinic. I want to focus on health policy and social justice advocacy. I want to promote a narrative of creating healing spaces, incorporating restorative justice and pushing the United States to lead the world in health outcomes.

And then there’s his ultimate goal: to be the first Mexican-American U.S. president.

“I want to challenge the status quo and make a difference for others,” he said. “And I’m so thankful for everyone at the university who’s helped me out and allowed me to make something out of my life.”