Over 400 alumni of the CU Anschutz Medical Campus had a wicked good time in downtown Denver on June 5. 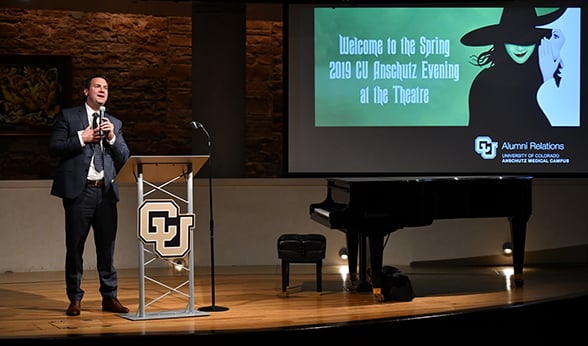 Scott Arthur, vice chancellor of advancement at the CU Anschutz Medical Campus, welcomes alumni and their friends and family to the performance of "Wicked" on June 5.

They attended the acclaimed musical production “Wicked: The Untold Story of the Witches of Oz” at the Denver Center for the Performing Arts. Deans from several schools and colleges at CU Anschutz also attended the event, which began with food and refreshments before the show in the Buell Theatre.

Scott Arthur, vice chancellor of advancement at CU Anschutz, welcomed the large crowd to the reception, noting that the function represented the first Alumni Relations cultural event that brought together all of the schools and colleges.

He told the gathering, which included graduates from decades past, that the CU Anschutz Medical Campus now has a larger economic impact in Colorado than the ski industry. “Think about it,” he said. “Think about how it’s grown, and think about the foundation that the people in this room have set and what you represent in Colorado because of your experience. We’re so happy that you’re here.”

Arthur also introduced Kara Padgett, the new senior director in the Office of Alumni Relations, who came to CU Anschutz in January.